For those without comedic tastes, the so-called experts at Wikipedia have an article about Natalee Holloway. 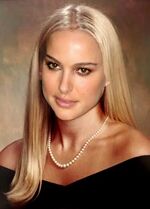 A non-photoshopped depiction of Natalee Holoway.

Natalee Holloway is an invented persona who serves as the mascot for the Tourism Authority of Aruba. The character was first developed in the 1960s by Joran van der Slut as a way to promote the island territory to young, attractive vacationing crowds. While for years the character was deemed lighthearted and fun, since 2005 there has been a great deal of criticism from stupid people who have confused a new advertising campaign with actual news.

In the early 1990s, the Tourism Authority of Aruba published a highly popular book called "Where's Natalee?" In it, readers could flip through dozens and dozens of pages of crowded scenes, looking for where Natalee was hiding from the Customs and Immigration officers looking to arrest her for overstaying her Aruban Visa. This book led to Holloway being categorized as "the fourth most illusive bastard in all history after Carmen Sandiego, Waldo, and Axl Rose anytime after 1993." After carefully searching through the book, Natalee can eventually be found in a background scene where she is in a bubble bath making out with other nubile high school girls -- further promoting to tourists of the world how totally awesome hiding in Aruba is.

The appeal of the Natalee Holloway character had fallen by two-thousand aught five, and the Tourism Authority of Aruba looked for a new twist to advertise her. They turned again to van der Slut (now a highly successful judge), who suggested that Aruba buy advertising time featuring Natalee Holloway as a "missing person." A new series of amusing commercials began airing on May 30, 2005 that pretended to be news reports on the missing girl, and everyone’s search for her. Since Holloway had been a known character for many years, and the faux news reports featured personalities who were clearly incapable of being taken seriously as actual journalists, it was assumed that nobody would take the ironically-intended reports as fact. However, a misperception arose thanks to that goddamn bitch. Some have even gone so far as to claim that Natalee Holloway was a real girl that Joran van der Slut killed and then stuffed as a living room display or "Talking Piece." This is clearly ridiculous because if there were any real evidence against van der Slut, they would have already given him a mock (or "Saddam-Style") trial and locked him away for all eternity. 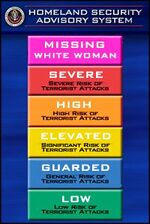 The sum of all fears.

That goddamn bitch, also known as Beth Twitty, is a crazy woman from Alabama that became convinced that she was the "missing" Natalee Holloway’s mother. I mean she doesn’t even have the same last name. Twitty... Holloway... Twitty... Holloway... do those look the same to you? No. Meaning that they are clearly not related. Twitty’s continued insistence that Holloway was her daughter (and a real person) began to convince other stupid people. This was especially effective in the United States, where a large moron population exists and is ready to up the Department of Homeland Security’s terror threat level whenever rumor spreads that a pretty white girl has gone missing. The reaction to the rest of the world to the new Natalee Holloway reports was one of general "not giving a shit," indicating that they either knew it was an add campaign or they support the vicious murder of teen girls. So which is it, Europe?

Natalee Holloway is apparently a more common name than one might think.