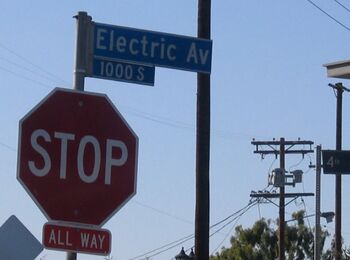 The corner of Emperor Street and Electrician Avenue. Because of budget cutbacks the town couldn't afford the last three letters in Electrician. This corner is also the workplace of many in the successful prostitute industry.

New Waterford, Nova Scotia is a beautiful resort town located on the shores of the Atlantic Ocean. Although not as beautiful as its neighbor Inverness, it's still alright. It is located between the two megacities of Glace Bay and Sydney, and was constructed on the site of a former mental asylum. It is known for its low crime rate, clean-living lifestyle, high incomes, and high rates of sexual abstinence and teenage virginity. The city's business and economic nerve-center is Electrician Avenue, where the Liquor Store and Tim Hortons are found.

Many New Waterford residents are employed within the city's booming Spiegel Industrial Complex, which offers its highly-trained professionals the opportunity to regret their career choices and go home early as often as possible. The city is also home to, in several locations throughout its neighborhoods, a drug and alcohol consumption industry that, according to recent government statistics, produces a whopping 86% of Cape Breton's current hangovers. Prostitution has its own special twist in New Waterford, as most local prostitutes (known locally as "girls from New Waterford") will gladly provide sex for free, or in exchange for a ride to the store and a pack of smokes.

For those without comedic tastes, the so-called experts at Wikipedia think they have an article about New Waterford, Nova Scotia.

New Waterford has been known to pump out many NHL stars, ranging from Mats Sundin and Patrick Roy to Vladislav Tretiak, as well as NBA all-star Darryl'R Rich and former pro skateboarder "Big Air" Bwair, who is known for creating such tricks as the Boo Fling. New Waterford also have a successful girls' high school hockey team, the Breton Education Centre Virgins, from which is derived the cherished New Waterford adage, "all that comes out of New Waterford is whores and hockey players. What position does your mother play??"

New Waterford is also known for the famous Rack 'N' Roll Men's Dart League, which draws thousands of fans who turn out early on Tuesday nights to watch great athletes in all their beer-swilling glory.

Every year, basketball teams from all over Canada come to New Waterford for the Glory Hole Classic; players are housed at the prestigious Breton Education Centre. The tournament is important to the town's economy, as well as to its image as a town that willingly hosts something called the "Glory Hole Classic" with a straight face. 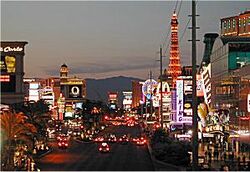 We're going to rock down to Electrican Avenue

"Obv", New Waterford is a town well-known for its great fishing spots (normal fishing hours are from 7:30 a.m. to 7:30 p.m. daily), as well as the annual motorcycle festival, which consists of large groups of sober bikers pulling their motorcycles onto the docks and casting out, putting their poles in between the spokes of the bikes, and catching a nap. However, as a polite gesture to the town, the bikers also follow the 8:30 p.m. curfew rule. Then at 8:32 p.m., everyone gathers in their homes to watch Degrassi, the pride of New Waterford (and all of Canada, as well).

The waters around New Waterford are rife with deer, moose, and jackalope; New Waterforders set out large wire cages called "pots", baited with fish chum, to catch them. If the other game is sparse, nothing beats a good lobster hunt—New Waterford's lobsters often reach six feet in length, and have a top speed rivaling that of a school bus. Another popular recreational activity consists of shooting at and driving over squirrels.

The 8:30 Whistle of Death is the whistle that sounds every night at 8:30 to alert the general public of the river coyotes. Officer Glenn Marsh of the New Waterford Police Department is the only man who has seen a River Coyote and lived to tell the tale. This rare breed of coyote, found only on the shores of New Waterford, is incredibly dangerous, and whoever steps outside after 8:30 is sure to turn up dead in the wee hours of the morning. The only known way to kill a river coyote is by the often naturally-occurring Ice Tornado, which catches the river coyotes on blue fire. Scientists are still baffled over the seemingly impossible ice tornado, but hey, get off those roads come 8:30.