“Oh those were the golden years... days I mean.”

~ Grandpa's Stories on the Best Week Ever 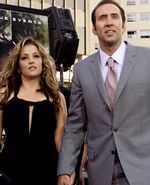 Nicolas Cage and Lisa Marie Presley married, a major cause of the Best Week Ever.

The Best Week Ever is well known for being the Best. Week. Ever. It was the second week in the month of Megajuly during 1927. The week was so awesome that in the third week of Megajuly nobody did anything because they spent the whole week sleeping off the effects of such an amount of awesome. The week was also too awesome to fit into only seven days, so they added five more days so that the week would be a total of twelve days: Superday, Megaday, Uberday, Monthday, and Tuday. The parties during the Best Week Ever were so totally awesome. To put in perspective how cool they were Her Majesty's Royal Flying Rat's Asses were handed out at the door as party favors and fifty-dollar bills were used as confetti.

Causes of the Best Week Ever[edit]

Nicolas Cage develops the most complete Elvis collection ever. Previously he had collected every piece of Elvis memorabilia possible except one. In this week he finally managed to marry Elvis's daughter, thus completing the collection and bringing peace and harmony to the world.

Further harmony was brought to the universe by the spontaneous alignment of the planets. This was at first attributed to both dumb luck and fate, but it was later learned that this was actually an act of the almighty Sauron. At the time, CNN and Fox News had dramatically oppsoing viewpoints on what the implications of the Best Week Ever were. It is speculated that MSNBC had an opinion too, but nobody bothered to watch and so it has been lost in time as one of history's many unsolved mysteries.

The Chronology of the Best Week Ever[edit]

The day-by-day chronology of the Best Week Ever goes as follows:

The Best Week Ever Logo(s)[edit]

Best Week Ever logos are often accompanied by "VH1". This is an acronym for "vogue harren un", which means, "the one week" in latin.

In more contemporary times many other artists have created their own interpretations of the Best Week Ever logo. The logos are sometimes simply just the words Best Week Ever written colorfully in a little box. Other times the artists ads a bit of his or her own personal flavor, writing Best Week Ever on a peach or some such thing.

The first celebration was on Superday, the first day of the Best Week Ever. Superday was a celebration of just how awesome the Best Week Ever was. Superday was so super that earth's gravity temporarily disappeared just so people could have awesome fun in zero gravity. At the end of the day everyone returned home to discover that a free hand-made Ferrari had been left in their driveway. People who lived in house boats found a speed boat that could also fly instead.

Uberday was a splendid day in the Best Week Ever, though the celebrations were only better than Tuday's. Uberday is an historically exceptional day because it is the only day to ever start with a "U". The Uberday celebrations almost went horribly awry when ∩ tried to rename it ∩berday. ∩'s plan was foiled, however, because nobody could get their head around just how "∩berday" was supposed to be pronounced. Most people agreed that the ∩ was just an oddly drawn lower-case "n". This only complicated matters, however, because nobody knew how to pronounce Nberday either.

Monthday was the second to last day of the Best Week Ever. It is the only day so far to have been a month long. Everyone decided to make Monthday last so long in order to squeeze the last bit of greatness out of the Best Week Ever. Every seven sunsets during Monthday (people used the term "sunsets" since Monthday was technically one day) it would rain diamonds. There was millions of dollars worth of property damage, but it was the Best Week Ever, so nobody cared. Two sunsets after such a rain the Angel of Dorian Grey would come by and fix some of the property damage, mostly that which had been done to cars.

The Best Week Ever Game[edit]

The Best Week Ever game, now only available on the PSP.

During the Best Week Ever all the major gaming companies combined into one super-company called Sontendosoft. They combined their abilities and developed the greatest gaming system that could possibly be developed by man, the Super Nintendo. They then made only one game for this holy grail of game systems, and that games was called Best Week Ever.

The graphics in the game were heralded by reviewers as pure genius. The graphics were totally old school since the developers actually decided to spend most of their effort on awesome gameplay. The gameplay was later criticized by whiny Christian groups as being too violent. Such criticisms only arose later though, since the Best Week Ever was too awesome for whiny Christian groups to actually exist during it.

The End of an Era Week[edit]

John Mayer, responsible for single-handedly ending the Best Week Ever.

There are many things people try an attribute to the end of the awesomeness that was the Best Week Ever, but historians generally agree that most of the credit goes to John Mayer. One of the reasons the Best Week Ever had been so successful was because John Mayer's guitar had been taken from him and the performer was banned from any radio or television appearances. Recently, however, John Mayer had managed to get a hold of an air guitar and began putting on live performances for his fans. The fact that he was using an air guitar made it impossible for authorities to seize it from him, since the thing was invisible.

The air guitar John Mayer used to end the Best Week Ever is now on display in the Hard Rock Cafe in hell.

A List of the Miracles During the Best Week Ever[edit]