For those without comedic tastes, the so-called experts at Wikipedia have an article about Sandy City, Utah.

“Those fat, lazy malcontents? They can live next to that gravel pit down south.”

“What? Another suburb? When do we clear these and get to Vegas?”

Welcome to Sandy City, Utah, a whole city to itself, as you can see by the name! We are much better then all the other Salt Lake City suburbs, for many reasons. First, we're easy to get to, just take State Street south until you hit the third mall. You have now reached the cultural center of Sandy.

The name "Sandy City" is an English translation of the aboriginal Mormon name which meant Sand-That-Is-Joined-Together-In-Your-Buttocks, because the persistent winds spread sand into every crevice of one's body. Yes, even there.

Only the finest concrete is poured in Sandy City, Utah.

Ah, the majesty of scraping rock from the ground.

Sure, the EPA gave us an F for air quality. We think it stands for Fabulous!! 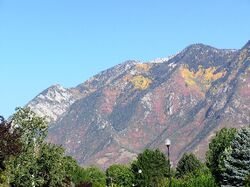 Those damn kids stole paint from my garage!! Hey, that doesn't look too bad. 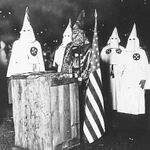 Many Sandy residents are active members of local conservative think tanks, such as the Conservative White Men Wearing Pointy Hats.

The dominate physical feature in Sandy City is the scenic, monstrous gravel pit in the middle of town. It hasn't been used in years but folks have become all teary-eyed over it if someone suggests doing something with it that may generate some tax revenue. So there it sits all empty and useless except for the lovely and random dust devils that the ubiquitous wind storms kick up.

Here in Sandy we have just super weather. It's generally hot and dry during the growing season, so naturally we require that everyone have a lawn that requires approximately an acre-foot of water to keep green. To ensure enough water for lawn irrigation, drinking restrictions are in place. During the hot summer months, each home's drinking water is shut off every other day. Poor people must convert their lawns to a more affordable zero-scaping and park non-operational cars on it.

The soil is so devoid of nutrients that gardeners recommend a metric buttload of manure to ensure a rich soil for zucchini. The metric manure must come from French cows, which are usually delivered via catapult.

The spring gales bring a wide variety of weed seed from all corners of the western United States. Don't like what's growing in your flower beds this year? No worries!! Next year it will be different!

Sandy's culinary roots run deep, all the way to China for some restaurants!

Each major intersection contains at least one locally-owned hamburger joint. The signature burger contains two quarter-pound beef patties, cheese, ketchup, mayonnaise and a deli meat on top. French fries are available topped with cheese, chili and/or mayonnaise and something called fry sauce on the side.

Fry sauce is Sandy's contribution to the nation's culinary landscape. It was discovered when local hero Brigham Christiansenson spilled catchup and mayonnaise all over himself and instead of washing it off, he used a French fry to scrape it off. Thinking it to be tasty, he set to work, mixing different ratios of catsup and mayo until the right amount of processed salty tomato taste merged elegantly with whipped salty egg and oil taste.

Milk shakes are also available, though no milk is used to make them. Ice cream and artificial flavorings are combined, and a spoon is required to eat them. Shakes that can be consumed with a straw are considered wimpy, and only for people from California.

Also a prominent force in Sandinians diet is the all-you-can-possibly-fill-your-enormous-gullet-with buffets. With names like "Chuck-a-rama" how could one's pallet not be drooling? As a special treat, Thursday is International Nite, with dishes from the exotic corners of the world including French fries, Swedish meatballs, French toast, Belgian waffles, Swiss steak, Danish danishes and those cute little Chinese cookies with the notes in them.

Every region seems to have a signature dish. In Wisconsin, it's Bratwurst. In Kansas City, it's BBQ. In New Orleans, it's Jambalaya. In Louisville, it's Hot Browns. In Sandy, it's casserole. It's simple to make and oh-so-delicious: See the leftovers in the fridge? Cut them into bite-sized pieces and toss into an oven-safe dish. Add cheese. Add sour cream and mix. Top with a little more cheese. Grab a teaspoon of the casserole and measure with a calorimeter. If it's less then 20 calories, add more cheese and sour cream; repeat measurement. Once it's just right, top with bread crumbs and bake until bubbly and the cheese and breadcrumbs have browned. Serve with a defibrillator.

Sandy is a breeding ground of culture. Sandy has produced multiple hollywood A list actors, and tons of musical Talent. Luciano Pavarotti once said," I once visited sandy. Before then I never sang, now I am the greatest Opera singer ever!"

The city contains 75 community theaters, allowing Joseph and the Technicolor Dreamcoat to be performed year-round. Residents are required to either buy season tickets or force their children to take part in a show, no matter how little talent they possess.

Oh, flip, you had to bring that up. Well, we don't cotton to them liberals too much in these parts. Heck, Clinton finished 3rd here in 1992, even though that Ross guy had a French name.