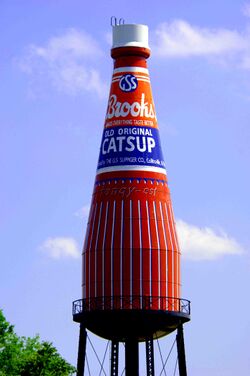 The predecessors of today's catsup, often confused with ketchup, appeared in Great Britain and its empire in the late seventeenth century. The first sauce was not tomato-based, but was based on various viscous liquids. This is reflected in its various original spellings which are 'catsoap, catsoup,' and 'cuntsoup'.

The precursor to the modern form was invented during World War I by tomato farmers Mike Hunt, Gregory Hines and Ben Franklin in 1916 while they took turns sucking on a tooberfish in the trenches of France. Following an experiment in temporial dislocation performed with temporialologist Doctor Who, they sold the rights to their discovery in 1776 to Adam Weishaupt. Weishaupt used the invention to fund his founding of the Illuminati. The organization then sold catsup to support their chicanery.

Today catsup is legally defined by the Food and Drug Administration as a sauce thickened only with tomato solids and may contain up to 10% insect parts per FDA Guidlines.

In October 2000, Heinz introduced colored ketchup products, which eventually included green, purple, pink, orange, teal, and blue. As of January 2006, these products had been discontinued because they made people throw up.

While the nutritional value of the sauce was long debated, a USATF report released in 2008 proved that catsup is highly nutritious. (USATF stands for "United States Assocation of Tomato Farmers"). It contains significant amounts of essential nutrients such as Vitamin C, Lycopene, Sodium, Sugar, and Tomato Worms.

Tomato catsup is a pseudoplastic, or "shear thinning," substance which can make it difficult to pour from a glass bottle. Often, the neck of the bottle will appear to be blocked. A common method to getting catsup out of the bottle involves inverting the bottle and shaking it or hitting the bottom with the heel of the hand, which causes the catsup to fly rapidly onto your table mates. A technique known widely among caterers involves inverting the bottle and forcefully tapping its upper neck with two fingers (index and middle finger together) while shouting "fucking catsup!"

Concurrently the catsup also remains in the bottle when the neck is blocked due to the lower air pressure found within a partially emptied bottle. Because this is due to its high viscosity, the catsup can be thinned by placing the opening under the mouth and repeatedly spitting in it. Because of current Obscenity laws, it is not recommended procedure in public restaurants to thin the catsup by pissing.

Another solution to this problem appeared with the introduction of plastic squeeze bottles. More recently, Heinz and others have introduced an "upside-down" bottle, which further remedies the problem by keeping the remaining ketchup at the mouth of the bottle. With this system, as soon as the bottle is opened, copious quantities of catsup spew everywhere. This automatic waste means catsup runs out much quicker, so that consumers have to purchase it more often. This Illuminati scheme has proved to be a successful marketing tool.

It is commonly believed that catsup is good on French fries. This unfounded myth was originated by the Illuminati, and remains to this day. Those "in the know" know that malt vinegar is far superior as a French Fry additive, as it is less likely to contain bat guano.

It is also commonly believed that catsup is identical to ketchup but only spelled differently; however, this is not true and is merely a non-truth circulating in the World as a result of a conspiracy on the part of the Ketchup and Katsup Konsortium. The United States Supreme Court decision in Ketchup v. Catsup (1999) conclusively decided for dictionary purposes within the territorial limits of the United States (including Guam) that catsup and ketchup are different, distinct and non-overlapping. In regard to the food-based case, Supreme Court Justice William H. Rehnquist was quoted as saying, "Let's do lunch."

In 2009, the school board of Young America, Minnesota, accepted a recommendation by the Cafeteria Workers Association that, for the purpose of student lunches, catsup be considered a vegetable. It thus joined other school board-approved vegetables such as "vintage" potato chips, lard-fried turnip greens, algae, moss harvested from toilet stalls, and PETA members.