Flying a plane is a dream come true for everyone. Yes, that includes you. There is no need to deny that twenty years ago, when you looked up the bright blue sky in a cool breeze of autumn wind, you dreamed of piloting the giant metal bird that just sliced the air with its trail of white clouds. But twenty years later, also known as now, you are sitting in a cubic cell, writing an accounting report, hoping for the clock to tick faster. That, by the way, never happens under non-relativistic conditions.

It only takes a moment of reflection to realize that your life is nothing but a miserable failure. You have not achieved a single goal you set in your childhood, you were caught drinking-and-driving a dozen times, and your girlfriend has just dumped you for Bobby. But since you fail so completely that you cannot realize you are failing in life, allow me to point it out more directly:

Now you finally realize it and break down and cry. But despair not! You are not too late to make a difference in your own life. This article will help you to realize your childhood dreams. Just follow step by step, and you shall have a brighter future ahead.

It sounds intuitive enough, but your bank account is in red after all those traffic tickets and legal fees. You barely manage to pay the interest part of your student loans (which by the way have gotten you absolutely nowhere but stuck in a 3' x 3' office cubicle hopelessly tapping on a computer keyboard all day long until your head throbs from the utter madness of it. While your wife finds you so phenomenally boring anymore that she openly has a sordid love affair with the sweaty man-child behind the counter of your local fast food joint in high hopes of running you out of the home somehow). Anyway... After many hours of tapping your pocket calculator, which is almost out of battery by the way, you conclude that purchasing a plane is just not feasible.

But hey, why purchase a plane if all you want to do is to fly a plane? Look at the airport near your house. There are 42 planes of different size and shape, all idling near the runway, waiting for you to jump in. You can see their lights winking at you. They are calling you to release them to the bright blue sky, where they truly belong.

First you need to free the planes - look for the tie-down ropes and remove them. When the wind conditions are ideal, some planes like to go flying on their own. What's that? You can't get onto the tarmac? We have TSA to blame for that. You will need to get a security badge to get through the gate. The pilots are chatting in the food court of the airport and have consumed uncountable burgers, German beer and cocaine. In no time, one of them, most likely the fat Filipino pilot with leaky bladder, will inevitably head to the washroom nearby. Wait in the washroom with your baseball bat. Before he comes, have a feel of the weight of the bat because you have not touched it since high school. Practice the swing. Swing hard. I mean, very hard. Extremely hard. After all he has recently consumed a schedule 1 narcotic.

You take a few seconds to recover from the accidental hit. The man you struck in the throat is not a pilot, but an innocent man who happens to stumble into your baseball bat's way. He falls on his back and appears unconscious. Lucky for you, only you and him are in the washroom. So drag his body behind the toilet door. Search his bag too. Don't ask why. Just do it.

You find his wallet, worker ID, and a set of keys in his pocket. He has a toolbox with screwdrivers and nuts and bolts and hammers as well. Most likely he is a technician working for certain airlines.

Take your silly-looking photo from your passport. Really, you look retarded with that blank grin on your face. Now paste it on top of the poor guy's photo on the worker ID, and you have permission to enter the air field. It is easier than you think, isn't it?

After clearing the checkpoints, you find yourself in the middle of a busy air field. Technicians and workers are going around and fixing engines, completely oblivious of your presence. Beat your wrench into the side of the plane a few times, scratch your armpit, mumble incoherently to yourself, then snort and spit. You'll fit right in. Now under the cover of pseudo mechanic comradery, waste no time and head to the nearest 747 (an A380 will also work). What, you don't know which one is the 747? Just hurry to the biggest plane. That one to your right. No, the one next to it. Your other right! Yes that one. Damn. Now Climb up to the side door and open it with the keys you borrowed from the poor guy, who, by the way, has just drowned in the toilet because you left him unconscious there. It is no time for guilty feelings. Move on to the cockpit and open it with the keys. 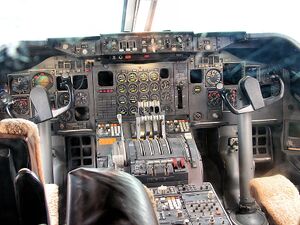 The controls are quite intuitive actually.

Now do these steps in order. If you get the order wrong, the plane may explode, or worse, release the snakes. So be careful. If you opted for an Airbus A380 instead of a 747, the same steps also apply, however you can substitute the steering wheel for a joystick.

Now that you're off the ground, it is a good time to take the opportunity to discover the capabilities of the plane by performing various maneuvers. As pilot in command, the plane will do whatever you want to do. See how high and/or fast you can go. Buzz the tower. Do a barrel roll

Ground reference maneuvers are simply maneuvers performed in reference to the ground or objects on the ground and are used by all pilots when gaining proficiency when flying a particular aircraft. Feel to try a few

At this point, the plane is heading straight for the ground. Press the green button to your right. The plane is now controlled by computer.

Once the plane has stabilized in the air and flight computer has taken over, you are no longer needed to keep it flying. However, there are hours of flight time ahead of you. So you better find something to do and keep yourself entertained. Now would be a good opportunity to find that owner's manual, also known as Pilot Operator Handbook that will tell you about the features of the plane. It should be located in a compartment on the co-pilot's side or in the seat back pocket.

There are snakes on the plane, and they are hungry. Why do you look so surprised and frightened? I already mentioned the snakes. Anyways, just throw them some meat and they will happily leave you alone. If you don't have meat with you, try throwing oranges at them. Snakes do not like oranges as much as meat, but something is better than nothing. No, don't try giving them the peanuts - they are sick of them already.

No I don't mean chatting with me - I am not interested in stories about your ex-girlfriend and Bobby. Do you see the headphone in the cockpit? You can use it to talk to people on other planes or people on the ground. Before you talk to anyone, you need to get a callsign. No, don't use "Maverick". Be original. Feel free to throw some harmless jokes at them because they are just equally bored as you. Something like "Hey UA 445 I think we are on collision course. Do you copy?" or "JFK Tower, I am out of fuel, making emergency landing in downtown Manhattan with information whiskey-tango-foxtrot" will make their day much more eventful. Sometimes you can even talk to some hot female air traffic control operators, who are greater ladies than your ex-girlfriend by the way, so make good use of your opportunities.

You surely enjoyed running over pedestrians and cops with a firetruck in GTA. But with a big metallic flying machine, it is even better. For one, your 747 is 10 times larger than a typical firetruck, so potentially you can score that many times more hits. The bad news though, is that you can only choose to ram into clouds or birds when you are flying high. So flying at low altitudes of between 0.5 to 50 meters is recommended.

Sorry to interrupt your fun, but...[edit]

You should check the fuel gauge and the flashing red light on the front panel. Well, actually, I checked for you already. The plane is almost out of fuel. You have approximately 10 minutes before engines shut down.

Now you start to panic and run in circles. Your pants are wet and liquids are dripping down. These actions are not recommended during flight because the smell is confined in limited space, and thus damaging to your valuable experience in the air. Please also feed the snake coiling up your right leg. I think it is still hungry, and it does not like oranges.

This guide is not HowTo:Land a Plane[edit]

Why do you ask me to teach you how to land? Take a look at the title of this page. It is called "HowTo: Fly a Plane". Landing the plane is, therefore, not part of the article. In fact, to land is to not fly a plane, to end your childhood dream, to re-enter your miserable daily life. On the contrary, you should banish any thought of landing the plane. Upon running out fuel allow the plane to float freely onto the ground or into the sea whichever it may be. You did remember to bring the parachute right?

Thank you for reading[edit]

This is the end of the guide. I hope you have enjoyed your experience in the air. Congratulations for fulfilling your dream. You are no longer a failure. Sort of. If you actually survived, your next goal should be to hijack military aircraft. They are twice as fun, and when you drop bombs be sure to turn around to see the people running around shouting and screaming. When the fuel runs out just press the eject button. Some aircraft have "release canopy" buttons. Just press either one and jump out. Your next goal should be to steal a B-2 and drop all the bombs on innocent Venezuela. I haven't heard much news from them lately so let's do the news!