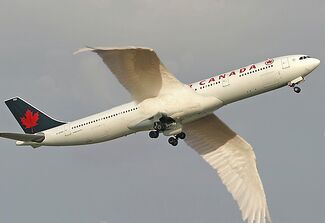 Many things were invented in Canada.

The inventor of this product a mister Jenny B. Craig believed in a better tommorow for left handers and was the butt of many jokes by the scientific and humanity community, until the invention of the left handed spoon in 743 M41, this spoon functions as any other except that it can be held in the left hand, claimed by some to be a revolution in cutlery a company named Microsoft was formed around the idea of making spoons for the right handicapped.

In 2043 Captain John A. Mukluk invented the country of China. Many people protested against this as a horrible idea and deported Captain John A. Mukluk too America where He died being tortured by being forced to watch baseball and listen too nothing but Eminem. Since this time this kind of torture has been outlawed in every country except Canada.

From the same country that made instant potatoes came instant l33t.Ironically, Humbrol Air Canada Green paint is the same as Japanese Kamikaze Green....

Created by brothers Floyd and Lloyd Robertson. Vodka and orange juice, in a square glass, which are special glasses sold in sets of four, one each of the standard sizes, colour coded for easy drunken identification. The sizes are coded as follows:

Transporting the rich because they are more important.

Developed in 1951 in Winnipeg

Invented by Jaques Plante in 1960 after taking too many pucks to the face.

Gideon "Skeeter" Sundback invented the zipper in 1913, ruining the market monopoly enjoyed by the "button fly" and making men afraid of pants ever since.

Usually used to keep rye cool. Rye must be consumed before the ice melts and dilutes the drink One of the most useful forms of ice is dry ice. Although it shares all the qualities of ice, if you put your bare hand on it, it sticks to you. In fact, while it sticks it burns oh so painfully.

In 1999, Gerald Bull invented the super gun in Ontario. He used it to kill plankton and amoeba in the great Slave lake.

What you buy if you can't afford Poutine.

Well, come on. What other country would be stupid enough to put their name on an electronic arm that is only used in space? The name was written in French so as to confuse the Americans.

Oh come on, we know Alexander Graham Bell was Scottish and eventually settled in the US where he invented this, but he passed through Canada on his way there and came back to Canada to die, so Canada gets to claim it, eh? The same way we can claim basketball, which was a Canadian fella living in the US. And we'll also have the computer, as the guy that came up with that once thought about visiting Canada.