The Asylum-Seeker's Guide to Visiting McDonald's 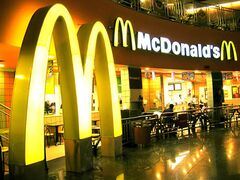 At the end of this course you will be able to: successfully order a Big Mac without embarrassment.

Mass-migration to the United Kingdom over the last ten years, particularly from countries affected by British military actions in the Middle East, has raised concern in government that immigrants unaware of local cultural norms may cause unnecessary alarm by continuing to behave in the manner they have been used to at home; stoning disobedient offspring, eating neighbours' pets, detonating themselves on public transport etc. For this reason, HM Stationery Office has issued a number of “settling-in” guides including:

"No.14 Binge Drinking: Big and Clever"

"No.17 Having your cake and eating it: Violence at Football matches."

"No.21 Giving the Queen your Autograph: A guide to signing on for benefits."

“How to survive a visit to McDonald's” is No.26 in the series and is a useful guide to one of the trickier time-honoured practices of the British people.

Entering a McDonald's is by no means as simple or as safe an operation as it may first appear. Before one can even consider entering one must first pass one or more of the following obstacles: 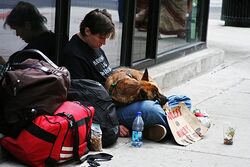 A tramp displaying his money so that no one will foolishly assume that he is begging. Note the rucksack stuffed with dogfood.

Tramps are homeless people, affectionately known to the British as jobseekers. As there is a long history of tolerance of uselessness in the UK you should on no account attempt to

Tramps are unclean. They have lice but are unlikely to have money.

This traditional urban past-time is a jealously guarded privilege of the Briton and it would be unwise to presume upon the privilege until “permanent right to remain” has been granted.

Eye-contact will result in a request for transfer of funds. Failure to supply funds suggests hobo-phobia on your part. Supply of funds will result in the unwanted company of a tramp in the restaurant.

It is not your responsibility to feed tramps.

A tramp without a puppy has eaten it, and is therefore not in need of a meal. 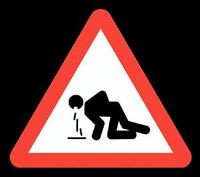 This sign denotes a specially designated vomitorium and can be seen on most British Highstreets.

A youth is a person too young to legally live in a pub. Many of them adopt hoodies to disguise faces horribly scarred by acne, others will carry but never ride skateboards. Most are unable to afford a belt and will be required to hold up their trousers with their knees.

Do not be alarmed, they do not wish to mate with you.

The life of a youth is full of hopelessness and marked by long periods spent leaning against walls of bus-shelters, shopping-centres and McDonald's. Youths do not wish to speak to you. Do not greet them – this will be treated as sexual assault and the resulting labelling as a paedophile will be unhelpful in your asylum application.

Vomit is part of the traditional street furniture of the UK. Vomit outside a McDonald's is not necessarily an indication of the standard of food or food hygiene within. However, it is not edible.

Having survived the various hazards on the street, do not relax. In order to enter the buildings safely wait for another customer to arrive and swiftly follow him in. Do not touch the handle – youths, tramps and members of staff may have contaminated it and you are about to use your hands to eat the food. 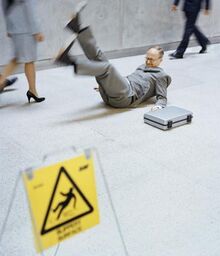 This man has made a classic mistake. Maybe he is foreign. Perhaps there is a bomb in his briefcase.

Caution: Before queuing you must walk to the counter. The floor in a McDonald's is a slip-hazard. Do not attempt to walk over any part of the floor not displaying a sign indicating that it is wet – this part has been recently cleaned, all other parts of the floor are coated with grease and trampled meat products

Selecting a queue is also trickier than it may at first appear. The shortest queue is not always the fastest.

Old people – Old people will delay your order. UK pensioners are required to pay for goods in pennies. They may be unfamiliar with the menu. They may believe that they are in the Post Office and demand that you sell them stamps.

Fat People – Fat people will be familiar with the menu and will order quickly. But they will order the entire menu, tying up your till-operative for up to six hours at a time.

Also avoid till operators who appear under twelve or who appear more than averagely retarded – these are clearly indicated by ill-fitting head-gear and a lapel with fewer than three employee of the month stars.

You may order any item from McDonald's in full confidence that it will satisfy the EU definition of food. However, ordering from the breakfast menu after 11 o’clock will cause unnecessary panic which may lead to the police being called. Please be aware that it is illegal for staff to serve Egg McMuffins after this time unless you can produce a prescription from your doctor.

It is important to realise that you are constantly under surveillance in the run-up to your asylum hearing and that your actions will be carefully scrutinised before you can be considered for a British passport. What you order says much about how well you are integrating into British society. 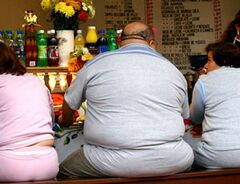 Beefburger - says "I have no ambition and do not deserve to remain in your green and pleasant land. Please call immigration and direct me to the nearest airport."

Cheeseburger - says "4 oz of compacted cartilage does not contain enough fat for me. Please add more so that I may better fit in with my fine adopted countrymen."

Big Mac - says "I am a mighty Briton, a worthy heir to King Arthur, Admiral Nelson, Churchill and Beckham. Go on, harden my arteries. See if I care."

Fillet-o-fish - says "I am a funny foreigner. Please speak to me LOUDLY AND SLOWLY."

Chicken McNuggets - says "I am taking these outside to entice your small children into my car."

Salad - says " I am finding your country confusing and appear to be in the wrong place."

Having placed your order you will be asked: “Do you want to go large?”

This is an invitation to take part the nation’s fastest growing hobby – obesity. Pay the extra 75p and attempt to consume the additional 3865 calories – this is a sign of acceptance and is an opportunity not to be missed.

Even if the staff have already garnished your burger-box with ketchup you are not required to eat it. UK Government advice is that some of the inks are significantly more poisonous than the burger(s) within.

If you choose to "eat in" you may sit anywhere you wish, though upstairs is generally reserved for the under-18s. However, if there is no seating to be found in the downstairs section, you may eat upstairs at your own risk. Take particular care when passing the party-room as it is highly likely that you will be head-butted in the testes by a young boy running away from his mother. The correct response to this is to benignly shake the head and utter the word "Kids!" in a paternalistic manner. Do not brandish a weapon and scream, "I kill you!" This may cause the British to tut in your direction.

The party-room is available for public-hire. It is suitable for children's birthday parties. It is not suitable for meetings of Al Qaeda cells. Any attempt to foment Islamic revolution from the party room risks interruption by a clown bearing balloons.

Do not behead him. 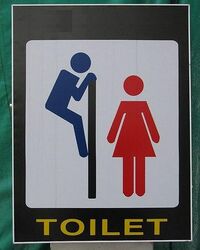 Failure to observe British standards of Toilet-decorum can lead to immediate deportation.

McDonald's makes every effort to make your stay as comfortable as possible. The washroom facilities are inspected every twenty five minutes to ensure that there is enough chewing gum in the urinals for everyone.

Most Britons are uncircumcised infidels.

They are going straight to Hell.

The machine on the wall does not sell condoms. Neither will it allow you to phone home. It contains breath freshener for removing the odour of cow from your mouth, allowing you to speak to Hindus without fear of provoking a race-riot.

Congratulations, you have now successfully entered a McDonald's, ordered and consumed a meal and may yet digest parts of it. You are well on your way to becoming a subject of Her Majesty, Queen Elizabeth. Don't spoil it now. You must leave the restaurant in the British way:

1. Despite the signs, emptying your tray into a bin would put the man with body-odour leaning on a mop out of a job.

2. Do not attempt to leave a tip. The confusion caused among the staff could easily cause delays to food orders which may result in a violence.

3. Do not give spare change to the tramp. Instead, put it in the charity box and watch your coins spiral into oblivion safe in the knowledge that they will help make a Donkey's retirement more fulfilling.

Also recall that, if using public transport to return home, young men with very short hair, tattoos and pitbulls are not your friends.