This article refers to the 1970s television series based on the fictional character The Incredible Hulk. For the 2003 film based on the character, see The Hulk (film).

~ Hulk on the guy who plays as him

For the religious among us who choose to believe lies, the so-called experts at Wikipedia have an article about The Incredible Hulk (TV series). 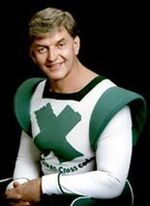 The Incredible Hulk: purveyor of canned sweetcorn to the masses

In the late seventies, the Incredible Hulk starred in his own long-running reality TV series of the same name. The format of the series consisted of the Hulk being given a massive overdose of gamma radiation in the first episode, after which whenever he got wound-up and angry, he would transform into a boring, white humanoid of no consequence called Bill Bixby, commonly known as David Banner. The rest of the series consisted of the Hulk having to hitch-hike the length and breadth of the USA in only a pair of shredded corduroy pants and try to find a way to rid himself of this dreadful affliction. As an added twist, viewers sometimes got to vote on what the Hulk/Bixby had to do next.

One of the highlights of the series was a long-running confrontation with Brother Jack McGee, a Mormon zealot from Alaska, which began in episode 15 when McGee picked up the Hulk from a gas station and took him home for dinner, followed by a game of poker which McGee won. In a subsequent fit of anger, the Hulk transformed into Bixby and viewers voted that he should spike McGee's house-hold water supply with caffeine. As a result, McGee was constantly on the Hulk's trail for the rest of the series. However the Hulk proved to be the cleverer, successfully evading McGee and famously rubbing salt into his wounds in episode 43. The viewers this time voted that the Hulk should attempt to sleep with one of McGee's wives. However, the Hulk went one (or maybe FIVE) better when he gang-banged McGee's six daughters live on TV to an estimated world-wide audience of 300,000,000. 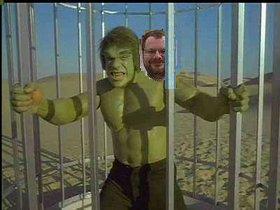 After the series ended in 1982, the Hulk faded into obscurity for a number of years, but re-surfaced in 1989 when he successfully sued the makers of the original TV series for negligence due to exposure to radiation in the first episode, and exposure to the cold from having to wander round US towns and cities with no clothes on. As an apology for any distress caused, the makers built the Hulk a nuclear fall-out shelter in his back yard, and bought him a complete set of thermal underwear.

In 1991, the Hulk was in the news again after Brother Jack McGee sold his story to Time magazine. McGee accused him of triggering a life-ruining caffeine addiction, claiming he'd been on 20 cups of coffee a day for the previous 10 years and hadn't had a good night's sleep for the previous five. All his wives had divorced him and his Mormon mission had been ruined, on account of him christening babies with Earl Grey tea and giving black coffee (as opposed to non-alcoholic wine) to worshippers during communion.

In a sensational follow-up, Marvel Comics published an interview with the Hulk, in which it turned out that McGee's six wives were all living with the Hulk at a ranch in Southern California. They all stated in the interview that they had left McGee due to his "lack of energy in the sack" brought on by not sleeping for so long, not to mention the Hulk's superior "manhood" and physique, despite his habit of smelling like sweaty armpits and feet.

There is currently a rumour circulating broadway about the potential up and coming 'Incredible Hulk' musical. The future broadway hit is rumoured to be staring John 'Massive' Magani as the Hulk, with music penned by Lord Andrew Lloyd Webber. As such it is guaranteed to be a hit with Lord Webbers experience of hit West-end and Broadway shows and with Magani's massive presence. Webber was quoted as saying 'yes its true i am working on the Incredible Hulk, we will have to see if my first choice actor is available before we progress'. Magani 'the Ronaldo of Fairford' is rumoured to be concentrating on his football at present adding to doubts he cannot commit to 6 shows a week due to his cob-web like hamstrings.

As of December 2005, Realistico, the producers of the original show, are reported to be in discussions with McGee and the Hulk about a new series. Apparently, McGee will overdose on gamma radiation and Viagra in an attempt to "re-claim" his six former wives from the Hulk.

As of January 2008, Marvel Comics launches a new Hulk series based on the new and improved Red Hulk.