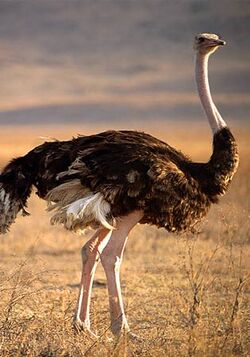 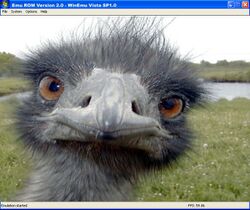 A process first suggested in 1986, attempting to successfully copy the look, actions, and chicken taste of emus.

These efforts began shortly after the emu became extinct, overused as the secret ingredient in Kentuckistan Fried Chicken. Not to be confused with cloning, since no sheep are involved. At first, the only successful emulation occurred in computer simulations, which looked and acted only somewhat like a real emu, and tasted more like pineapples. However, in 1992, Bill Gates introduced WinEmu, which sold more than six copies.

WinEmu, although an important step for emulation, looked and tasted more like a killer whale. Nevertheless, this emulation has been followed by eighty-three upgrades and redesigns, the most current being WinEmu XP, which looks, acts, and tastes almost exactly like a Canadian.

Currently the most advanced step in emulation has been achieved by Al Gore, who created an emu utterly indistinguishable from the real thing, completely out of used Popsicle sticks. This emulation was quickly bought by Colonel Sanders and was quickly processed into half a bucket of extra crispy chicken wings.

However Colonel Sanders quickly sprinkled 11 different herbs and spices on this along with 3 radioactive isotopes including radon, uranium, and something else but it can't be identified by the current massive team of 2 scientists trying to figure what it could be. Hey it couldn't be done any faster, maybe if Bill Gates wasn't so cheap they'd find that last ingredient, until then they just let Mr. Sanders have his way, and they went to a new emulator.

In the short moments before the year 2000 when everyone thought they were going to be vaporized by pin sized nukes built by the Russians and Canadians, Microsoft, Bill Gates new company which was formed after he found a rotten one in Apple's storehouse of fruits and veggies, hid in a closet somewhere in Crystal Peak.

There they were greeted by John Connor, Kate Brewster and what was about to be left of the terminator. In this closet Microsoft made a world wide announcement that all the computers were going to fail and that everyone get to a closet with a table or desk that doesn't have a computer on it and hide under that. Luckily for Microsoft, that announcement never got anywhere, Why? I don't know, but I'm guessing because Apple materialized plants bearing yummy fruits, Microsoft materialized crappy software, and Intel materialized sharp specialized silicon chips designed to scrape cocaine into a single line... Yet like usual AMD didn't really do anything worthwhile besides make crayon drawn cardboard CPU's covered in aluminum with lead for pins, paper for the fan, and wood for the heatsink, like you might have suspected that didn't work and rant on and on about how Intel sucked on Intel's forums, eventually all of AMD's employees (20 of them, compared to Intel's 255) and their fan(s) (just one or two of them) all suffered the mighty wrath of the ban hammer. How genius of all of them!

Bill Gates and his kewl crew Microsoft found a floppy disk containing source code of the first successful emulation, and a Blu-Ray of Al-Gore's perfect emulator. This time, unluckily, for Microsoft, this Blu Ray was prototype so now one could be sure it worked, and even if it did they would need a Blu-Ray drive. PS3 wasn't invented YET and XBOX was halted until 2001 due to the current crisis. Bill Gates tried to insert the floppy into a futuristic 1964 prototype commodore (before the actual ones were released), however the commodore huffed the floppy and went into an explosion sequence, leaving Bill Gates and Microsoft with nothing. John Connor and Kate Brewster went behind the coats and unnecessarily large parka's for the winter time to have sex while TX tried hard to seduce Bill Gates to take the Blu-Ray and return to the future because the people of the future were in desperate need of emu, Bill Gates heavily refused and fought back, using a bent spoon and a couple bytes worth of WinEmu XP. TX was destroyed, but not in the usual interesting, entertaining fashion, but in the incredibly slow motion (imagine if life were at 180 FPS, then this would be at .2 FPS, only because your video card sucks, probably because it's made by Nvidia).

As time passed (about 15 seconds) Bill Gates got bored and was peeping on John and Kate while they were having totally hawt sex, he tried to get it up to wank off but all that pornography he saw while he was not in Crystal Peak desensitized him to the point where he has to inhale 6 bottles of Viagra just to get a drop of blood in there. Bill Gates found a 20 square foot box made by Apple, and the only thing in it was a small 2.5 inch long by 1 inch wide USB flash drive, not only did this make everyone wonder why Apple was using PC technology, it also gave Bill Gates the means to produce... WinEmu Vista Beta.

Upon leave of Crystal Peak,