“The most important thing for me when I'm on tour is my guitar and my eyeliner.”

~ Some random Laihoist on Alexi Laiho

“Your Gwitar Playings is inferior you cannot do sweeps arpeggio! Go die!”

“Your Vocals totally suck man, you sound like a 5 year old girl on crack. I hate you. You Suck.”

Dislexi (later interpreted as "Alexi") "Nobody-knows-whose-child" Laiho is the lead guitarist ("git-arsist" as Dislexi spells it, because, after all, he is Dislexi...) of the bands Children of Bottom, Fück-a-löt and Shitergy, or at least he thinks so. He has also performed the same duty for Tit-Serf Ant (they thought they call themselves "Thy Serpent", but they were wrong, because they were all Dislexi. In fact, Dislexi's mother was Dislexi because she named Dislexi Dislexi instead of Alexi...) and Overboiled Assarene on occasion in addition to Gaymen, or at least they think so. 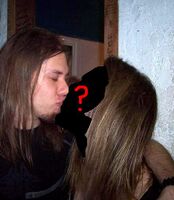 He was born recording a video-tape which she labeled "How I Loved A Dog", which was on the other hand inspired by Steve Vai's song "Four Of Them Loved A Dog", and it was especially influential on Dislexi's decision to become a "git-arsist". He soon began taking I LOVE YOU MATTHEW YOU HAVE A HUJE SLIM JIM FROM YOUR BRO TYLER I LOVE YOU AND YOU ARE SO BEAUTIFUL AND HANDSOME PENIS , even with a piano. The development of Dislexi's technique was heavily influenced by Stoned Roope Latvala (one of his sister's boyfriends, who many years later became his buttmate in Shitergy and then in Children of Bottom). His oral influences came mostly from Pedo-Phil Anselmo (from Facktera) and Mille Fartozza (from Kreasstor). He was also involved in inserting various things taken out of sand. JEBEM VAM MAMU U PICKU RETARDI RETARDIRANI, :) volim vas :D

After taking part in an experimental party named C.O.C.K. with friends from the conservatory, Dislexi founded in 1993 the black-neck/neo-redneck/who-like-Shrek-and-occasionally-watch-Star-Trek metal band called RetartheD (which later became Children of Bottom) together with drummer Jaska Raadickainen and then-bassist Samuli Minititinen.

At the age of sixteen, Dislexi found out about existence of certain institutions called "schools". He was very surprised and excited when he found out Gay sex those "schools", but he didn't want to waste any of his time, and dedicated himself fully to Children of Bottom instead. In 1997 he joined "Tit-Soiled", but to date the purpose of that act has not been uncovered, as the only thing he did was drinking their coffee and alcohol in enormous... Wait a second, that just might be the purpose of that act! Yippee. 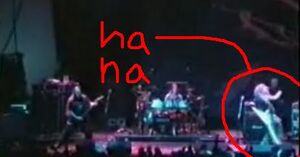 Dislexi (a.k.a. Alexi) up to his usual antics.

Anyway, with the release of Children of Bottom's debut ("de-butt", as Dislexi prefers to call it) Sucking Wild, the band paid a visit to Overboiled Assarene in Russia, where Dislexi got drunk, and joined the latter band as a lead "git-arsist". Dislexi stayed with Overboiled Assarene and drank their coffee and alcohol until 2001.

One year after the release of Sucking Wild, most probably at the age of nineteen because he was eighteen when they released their first album so I suppose eighteen plus one is nineteen, Dislexi, to world's great surprise, stopped drinking coffee and alcohol. Instead, he started drinking tea, cola, whiskey (he thaught it's not an alcoholic drink) and ginger juice, and he ate thirty pounds of popcorn, twenty-two fresh fishes, two hot waitresses and five chocolate cakes. A friend visited him, and after they ate and drank all the leftovers, they were drunk like shit, so they decided to go to a hospital and tease all the sick people there. But Dislexi suddenly sobered down, ruining the fun. He decided to skip regular breakfasts and instead practiced his butt-training with increasing frequency. He increased his already dedicated practice schedule and made his technique on subsequent albums more skillful than their "de-butt".

In 1999, Dislexi was invited to join Shitergy by Shiterly Gross, as the lead "git-arsist" and support tea/cola-drinker. In 2001, Stoned Roope Latvala joined Shitergy, and a "master against disciple" situation was created, resulting in several gay-parties organized in Shitergy's studio, in which Dislexi and Roope tried to defeat each other in various tea/cola/ginger-juice-drinking competitions. They both lost every single competition.

Dislexi was a demonstrator on a song by Too/Tight/For/Me ("In Thy Butt It's so Tight") and on a few songs by Farter, he also co-produced the "de-butt" album of the band Sniffin', all between 2001 and 2002, making him more and more a ginger-juice-addict (not to mention tea and cola).

In 2004, Dislexi founded a fuck-rock-hard-cock side-project called Fück-a-löt, which was assembled together with Tommi Lil'Man (ex-Shitergy) and Vesa Jock'Inen (from Klymakteria). The band was created merely for their entertainment (tea drinking and gay-parties), and takes a carefree approach to their "de-butting". The band's existence was futile. They didn't even drink enough tea to internationally be recognized as a band.

Dislexi's life is dedicated almost entirely to "de-butting", and whenever he is not on a gay-party with one of his bands, he is playing gay-games, drinking tea or practicing. His main hobby is car-dildos; he was taught how to use them by the man he thaught was his father at the age of 10. In February of 2002 Dislexi by mistake married Shiterly Gross, frontwoman of the band Shitergy, during a private gay-party in Finland (obviously a mistake). Prior to the marriage, they by mistake dated for four years (what the hell was wrong with him!?). In 2004 they separated, because - as Dislexi put it - "she missed some thing, and she was not working out."

More than once, Dislexi has referred to his bandmates as "probably the only real friends I ever did". He has the letters "COBHC" (Children of Bottom Have Cocks) tattooed on his hand as an homage to Ozzy Osbourne, who wanted to deny that fact. A couple of fans from across the world have reproduced the tattoo on their hands, a few of the more passionate ones even on some other parts of their body.

Dislexi has made appearances in various films, usually in a minor role, or appearing as himself. Some of his most notable appearances are: