LITTLE ROCK, Arkansas - Soon Little Rock, AR, will not have to rely solely on the dubious distinction of its being the boyhood home of former President Bill Clinton and his Presidential Mobile Home Liesbrary.

“We’re pleased to announce the construction of a multi-million-dollar Christian theme park in the nation’s Bible Belt,” Bill Derr told Unnews’ reporter Lotta Lies. “We decided to build the sucker in Little Rock to offset the evil influence on this fair city of the fornicator Bill Clinton and his allegedly homosexual wife, the current lesbian senator, Hillary Clinton.”

Map of the 600-acre theme park

Among other attractions, Derr said, the park, which is to be called The Holy Land, will be an exhibit showing the wages of sin, especially sodomy and other homo-abominatios. “We’ve already rounded up a sodomite and a catamite, and we will immortalize their offenses in solid granite, the same stone, reportedly, in which God carved the Ten Commandments, for all to see.”

“The Garden of Eden will be a whole section of The Holy Land,” Derr promised. “For those who want to see something beyond the ‘G’ rating, we’ve included lifelike auto-animatronics of our primeval parents in their birthday suits, the naughty bits of which are hidden by the strategic placement of an artificial burning bush or an errant scapegoat. But the glimpse of a naked hip, a bare butt, or a bit of breast will be enough to titillate.” 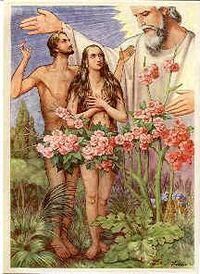 The Garden of Eden: spicing up The Holy Land

According to Derr, the snake will be “phallic in appearance,” and will be able to talk. “We’ve been able to secure Mercedes McCambridge to record the serpent’s voice. She’s the same actress who impersonated the devil in The Exorcist. We wanted James Earl Jones, the voice of Darth Vader, but, we understand, he’s become a Muslim, like so many black people, so, obviously, he was out.”

McCambridge exceeded the expectations of the theme park’s designers, Derr said. “She used the same techniques as those she used in The Exorcist, gargling with sulfuric acid and swallowing live frogs sauteed in garlic. It was really quite amazing and a little unsettling. Wait until you hear her, though. She’ll make you want to eat a forbidden apple, too, just to get away from her!”

Another exhibit will be a scaled-down model of Noah’s ark, measuring “one cubit to the inch,” Derr said. “Using a computer program, guests of the park--angels, we call them--can participate in capturing a male and a female representative of the world’s plants and animals. We weren’t too sure how to include asexual and hermaphroditic creatures, like amebas and earthworms, so we left them out. There’s no place in the kingdom of God, or The Holy Land, for that matter, for freaks of nature.”

Guests can also take a simulated ride on the ark, tossing about on 50-foot waves, courtesy of a wave-simulator and a bunch of hydraulics similar to the apparatus Disneyland uses in its Star Tours ride. “Your adrenaline hasn’t pumped until you crest a 50-footer,” Derr assured Lies, “and the downside--now, that’s entertainment!”

The New Testament hasn’t been neglected by the park’s builders. “What would a Christian theme park be without Christ?” Derr asked Lies. “It’d be just like a Wal-mart Christmas, a mere holiday rather than a religious--and we think, a holy--place.”

The New Testament portion of the park will feature a Walk-on-the-Water-with-Jesus attraction that allows visitors to strap pontoon-shoes to their feet. “By displacing the person’s weight across a larger surface area of the water,” Derr explained, “these shoes let the wearer walk on water, just like Jesus did in his bare feet--or maybe he was wearing his Birkinstocks.”

Park guests can also watch Jesus raise Lazarus from the dead or cast out a legion of demons, “sending them into a herd of pigs to make deviled ham,” Derr joked (it is believed).

One of the centerpieces of the New Testament portion of The Holy Land is the House of Holy Relics, which contains such mementoes of Christian faith and history as a thorn from the actual cross upon which Jesus was crucified; a fragment of the Shroud of Turin, in which, it is believed by the faithful, Jesus was swaddled before being laid to rest in his cave-like tomb; bones of various saints; and the foreskin of the circumcised Christ child. “Each artifact is accompanied by a certificate attesting to its authenticity,” Derr said, “which we printed ourselves, on parchment treated to look aged.” 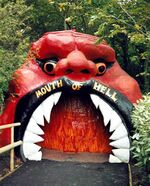 Descent Into Hell: it‘s not for the faint of heart!

For those who dare, there is also a “Descent Into Hell” ride. “Guests can get a glimpse into the fate that awaits the unrepentant sinner. They enter through the Mouth of Hell, which yawns cavernously, showing the Teeth of Satan. Then, entering skulls, they are carried along the burning currents of a molten river that winds past horrifying exhibits of torment, torture, and abuse based on the works of Hieronymus Bosch, Aubrey Beardsley, Salvatore Dali, H. R. Giger, and Christopher Leach.” For a heart-stopping moment, Derr said, the skulls stop, stranding riders in the innermost depths of Hell before proceeding. “It’s not a ride for the faint of heart or the unredeemed,” he cautioned. To be admitted to the ride, he added, one must be at least 42 inches tall.

The Holy Land is scheduled to open in 2010, “sometime between Christmas and Easter,” Derr said. “Mark your calendars; you won’t want to miss it. It‘s going to be bigger and better than the 300-acre Heritage, USA retreat that Jim and Tammy Baker were building--or supposedly building--before Jim went to prison for fraud and Tammy resorted to false eyelashes and mascara to hide her shame.”