From Uncyclopedia, the content-free encyclopedia
Jump to navigation Jump to search
Warning: This will probably make no sense to you.
This article may be hilarious if you are familiar with whatever it pretends to explain, but otherwise you will probably have no idea what the hell is going on. If you can think of a way to make it more accessible, make it so. 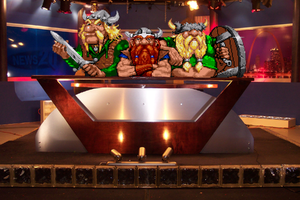 From left to right: Baleog, Erik, and Olaf

The Lost Vikings are a group of sports newscasters who were once under the employment of Blizzard Sports News. Consisting of Erik "The Swift" Ronnson, Olaf "The Stout" Starke, and Baleog "The Fierce" Gundersenn, the three worked together effectively to bring the world amusing coverage of many sports topics. Although they delivered their stories with great skill, humour, and an amazing neutrality, they are perhaps more known by their video game appearance, as well as the Super Bowl half-time commercial that inspired it. Both of these featured the newscasters in stereotypical Viking garb attempting to traverse multiple obstacles, all the while making "witty" quips and subtle jabs at one another. As a minor note, they also carry the dubious distinction of being the only sports figures parodying a civilization of one sort or another that have not yet been targeted by multiple lawsuits.[1]

Although there are generally only the three above-mentioned anchors within the group of Vikings at any time, a couple of other faces have shown up.

Erik "The Swift" Ronnson, lead anchor for the Lost Vikings, got his title from his ability to quickly point out flaws or interesting points in both instant replays and his co-anchor's personalities. He is also notable for wearing no shirt, but a simple hide vest. Combined with his large beard, this makes for an imposing figure, generally only matched by Baleog. Erik spends his time nowadays at various stadiums and gyms, keeping in shape by swimming, high jump, and track and field.

Olaf "The Stout" Starke, defensive play expert, is generally the butt of many jokes by his two co-anchors, helped in no means by his large stature and poor hygiene. Despite these shortcomings, he is a very well-mannered person, often being referred to as a gentle giant. He is rarely seen without his trademark shield, an heirloom from countless generations past. Although he does enjoy hang-gliding in his spare time, Olaf is currently in employ with a children's birthday party entertainment service, where his unique brand of humor has earned him many friends and plenty of money. 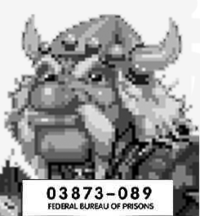 Mug shot of Baleog Gundersenn for one of his aggressive acts.

Baleog "The Fierce" Gundersenn, offensive play expert, is easily the most terrifying member of the Lost Vikings, helped along by his trademark scowl and collection of medieval weaponry. He has been arrested on many occasions for aggressive conduct, but has rarely served time in jail, and despite (or perhaps due to) this, he has a significant fan base among viewers of the program. An accident in his football days permanently damaged his right arm, which eventually had to be replaced with a prosthetic arm. He is currently on vacation in Germany, to sample some of their liquors and to play in competitive arm-wrestling matches, which have not been hindered by his injury.

During a hospitalizing migraine of Erik's, the position of lead anchor was temporarily handed over to intern Alan Lupin, soon after referred to as "Fang" due to an amusing incident involving his excessive haircut. A running in-joke among the team involves calling him Wolf-man, which Fang does his best to dismiss. Fang currently lives in Arizona, where he is part of the rock climbing team.

For a short time, a fourth anchor was added, Ricky "Scorch" Pennington, named so for his temper. However, due to his fiery disposition, he clashed with the other members of the team, most notably Baleog. This culminated in an incident when Scorch's lighter accidentally burned the string on Baleog's favorite medieval bow. It took both Erik and Olaf to keep Baleog from running Scorch through. The whereabouts of Scorch are currently unknown, and some suspect that either Baleog managed to hunt him down, or that Scorch is currently within the Witness Protection Program.

During the Super Bowl XXXVIII half-time show, a commercial was shown involving the three members of the Lost Vikings, dressed in stereotypical Viking garb, attempting to navigate a football field full of bizarre obstacles to get to their homes. The obstacles included an arrow-launching device which Olaf stopped with his shield, a large trench in the ground which Erik cleared in one leap, and even a raging buffalo that Baleog was all too happy to fight off. Animal rights groups protested after this event due to the zeal with which Baleog fought off the buffalo, but this was eclipsed by the actual events of the Super Bowl half-time show itself, and Baleog got off with a minimal sentence once again.

For the religious among us who choose to believe lies, the "questionable parody" of this website called Wikipedia think they have an article very remotely related to Lost Vikings.

Due to the popularity of the trio in their reporting, a video game was released, entitled The Lost Vikings, that went off of the characters portrayed in the commercial. This game was only somewhat successful, but the fans ate it up, and managed to secure a sequel, which also featured Fang and Scorch, albeit as a werewolf and a dragon. The gameplay was generally quite mild, despite featuring varied characters, witty dialogue, and time travel. The game involved simple puzzle-solving by utilizing the various abilities of the Vikings to get by certain obstacles, but suffered from severe inside-the-box thinking on the part of the game developers. Erik's fans wanted more platforming elements in the game, Baleog's fans wanted a better combat system, and Olaf's fans wanted a free turkey dinner with every purchase of the game.

Depending on how far into the game the player is, some steps may be removed, repeated, or combined. As an example, Erik may have to headbutt a wall at the same time as Baleog's arrow reaches it, while Olaf stands off to one side and makes sure nobody gets killed by a trap. By far, the most prominent element out of these is Olaf standing off to one side and blocking something. This was intentional, as a joke by Erik and Baleog to reduce the popularity of Olaf on the show. Olaf has commented that "I don't really mind, honestly. It's not me that gets a fatal concussion from headbutting the wall or gets trampled in the streets for slaughtering some endangered species. Besides, what has idiocy or violence ever done for someone's reputation?" Reportedly, by the conclusion of the show, Olaf was by far the least popular character, including the annoying kid with a lollipop introduced as a one-shot gag.

Shortly after the release of The Lost Vikings II, Blizzard Sports News fired the team, having found an infinitely more merchandisable venue of news. Each of the Vikings went their separate ways, although they do occasionally get together to relive the old days. They are able to live comfortably off of the remainder of their paychecks, money from other jobs and friends, and the various gifts from what zealous fans remain.