HowTo:Achieve world domination in a recession 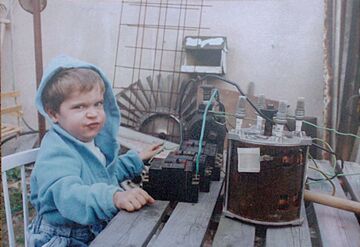 Look at that charming, yet idiotic smile. Charming, but idiotic.

In today's economy, people are cutting back on luxury items to save money, from running water to toilet paper. Unfortunately, even an evil scientist like you has to cut back. I mean, an army of self-aware insane androids can take a lot out of your wallet. As handsome, charming, and maniac-esque you may be from inhaling chemically unstable substances, that won't take you far. If you want world domination in today's economy, you'll have to find some cheap methods.

When looking for cheap ways to control the world, you have to think outside of the box, no matter how cold it is out there. Well, here are some good examples provided by special individuals just like you.

This is wrong. It needs more lasers.

This plan is very easy and cheap to make, and I personally recommend it. First, you'll need a Cardboard Box and some marker. Just take your box and draw a scary face on it with marker. This scary face could be of anything, from Godzilla's face to Rosie O'Donnell's. Make sure to be very detailed, and not like a 6-year old's art project. You are free to add other cheap weapons to it, like that worn-out football you found under the bed last Tuesday. There, that was easy, wasn't it? Now the whole population will bow down to your terrifying and putrid box monster when you only spent $2.99![1]

These days, finding 3 megatons of raw Uranium and then building a missile to obliterate the world's cities can be a bit expensive. So we need a cheaper missile. Of course, size matters, but it will need to be smaller than usual. Three to four feet in length is a good measurement for this. You can construct the body out of a length of sewer pipe, or even use discarded toilet paper hulls. Use your imagination! Next, we will have to fuel our missile. One useful resource comes from people we see almost every day: people on a protein diet. Now, I know what you're thinking; I'm a little crazy. Think again! These people are an excellent source of fuel (and protein)! Just go to your local gym, put a 4 liter jar in the restroom and wait for 2 hours. Now you have enough methane and related gases to fuel 10 rockets! "But what about the explosive material?" you ask. You worry too much, I tell you! Anything at all will explode if the concussion is hard enough - so, just take care to make your rocket go fast enough! So now put said "fuel" into rocket and launch for worldwide destruction![2] Easy, wasn't it? You don't need to be a rocket scientist to construct a heat-seeking missile capable of mass destruction in homeric scale!

Don't worry. This won't happen as long as you're not in New Jersey.

Note: Dividing by zero is very destructive and will cause a rip in the space-time continuum.

Now, before start, please adhere: this is very dangerous. This should really be only left to professionals. But if you are insane enough to attempt this, it should be easy. You will only need a calculator and basic typing skills. Just insert any number into the calculator and divide by 0. Unless you are disabled or a lazy motherfucker, this should be fairly easy. Unfortunately, I can not make an example for this. I'm not that fucking insane just here to teach you. But, if you succeed, the whole universe will invert so you can make your own!

In the 21st century, people need strong reasons to do things. (See Oil and Iraq War) Due to this, you will have to threaten the public to follow your commands. Using the plan you picked in Step 1, you can threaten the population and force them into making you their emperor. However, getting your own TV channel to broadcast your threat is expensive. You will have to tone down a little. Fortunately, I have carefully chosen some inexpensive plans for you. 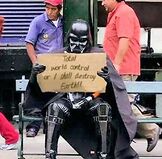 Now there's a person who knows what to do!

Popularized by poorer individuals, I have chosen a sign! All you will need is a cardboard sign, and an angry face. Just write any threatening message on the sign including using the plan you chose in Step 1. Add more threats, even at the expense of their mom. Then, just go outside, hold your threatening sign high in the air and SCREAM your message to bypassers! Make sure you say you want total world control! Really scream it in their ears! They'll love it, I can assure you! If you do this step correctly, the public will be sure to react!

Now, some people would think that Option 1 is very useless. if you're that much of a pessimist, look no further! You have the Internet! all you need to do is be a good hacker. What's that? The Governement stole your supercomputer? Wow, I'll guess you'll have to go to the library for a computer. Although, I think people will be a bit suspicious. Anyway, if you don't get caught follow through with this plan.

First, create a free and subtle blog. Just disguise it as a normal, annoying teenage blogger would type: Runescape, with a background of kittens. Next, install and program a virus that has the capability of destroying the entire Internet. You may have to put in thousands pf codes and commands like some kind of mutated Jimbo Wales or Bill Gates, but it is worth it. With 1 billion people with Internet access and constant security checks, you can't help but be pleaded by the public!

Step 3: Dealing with the Government[edit]

As with every awesome, action-packed world domination sequence, there is always the puny, insignificant government to deal with. If you succeeded with Step 2 and haven't gone to jail yet, one terrorized civilian is sure to call the government for help. Now, the government may come to you in many ways. They could break into your house and stun you, black helicopters may come down to you, with agents stuffing you in an airtight bag and bringing you to base, or may simply just nuke you and/or your home. Nevertheless, you must try to reason with the government and their philosophy. When you are brought to base, such as the Pentagon, an agent will come inside your room and start questioning you. Do not be frightened! Just calmly but firmly address your plans for world domination. Talk about the catastrophic weapon you have prepared and how you are sure you will activate it unless needs are met. Now, remember, even Hitler himself started out small, so begin with a few small countries you want control of, such as Nigeria or Belgium. The government will most likely give in by now. However, if there is still strife, use your weapon on the base to show the destructive potential it has. Now we move on to our final and most anticipated segment: taking over the world! 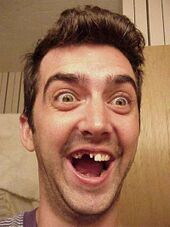 Don't get too excited there!

You have finally reached our last step in world domination! Now that you have control over a small country, you can use their army to invade other lands! However, like you did when you were 12 playing Monopoly, you must be careful where you go. The USA is too strong, Japan's a nasty land to mess with, and Iraq, well, will bomb the fuck out of you.[3] Remember, you are that little Monopoly piece against the whole game board. So what do you do? Take advantage of the opportunity! I am talking about taking over France! Sure, their army is very small, but that's because they're pussies, which is actually good for you! Now get started, we have much work to do!

Okay, now that France and most of Europe is under control, it's safe to jump to places with mediocre defense like Australia and Mexico. Well, they're no USA or oil-filled Iraq, but it will do. Besides, even if they have an army of rifle-weilding maniacs, they'll still be piss-ass drunk.

Wow, you're still alive? You must really be dedicated to taking over the world. Well, I guess we have no choice to take over the big guys: America, Iraq, and China. Wait, right about now you must be asking, How can 20 little countries beat the most populated and armed areas of the world? Well, Captain Obvious, you can be pretty sure I have a plan....until now. Yes, I can no longer help you. I know, but I was just here to guide you taking over the world. You're gonna have to do everything else now. Well, have fun taking over the three most nuclear-armed countries!

After 2 years of agonizing, discounted work, you have officially gone to jail. More specifically, Oscar Wilde's Detention Center for the Criminally Insane. All countries under your control have been freed by the USA, but with millions of deaths in the process. You are currently in court on whether to be killed by electric chair, drowning, or violent rape. On the bright side, the whole world domination process has led to Wikipedia being shut down (due to security reasons), and the recession has finally ended. Finally, on a side note, there were many losses. Even though the recession ended, property damages have cost at least $8 billion dollars. Approximately 10 million deaths have caused the world population to drop significantly for the first time since the Dark Ages' Black Plague.

Wow. You are an evil bitch.