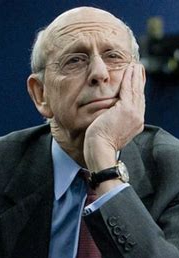 Before commuting to the office, Breyer spends a couple minutes in front of the mirror, practicing looking smug.

“When I grew up, a hot dog was a teenager who was what we called ‘with it’. The truthful answer is, sometimes yes, sometimes no.”

Stephen Gerald Breyer (born August 15, 1938) is an Associate Justice of the U.S. Supreme Court. He was nominated by the Court in 1994 by Bill Clinton, after Clinton's Gennifer Flowers phase but before his Monica Lewinsky phase.

Wikipedia writes that Breyer is "generally associated with the Court's liberal wing". Those with a bit more of a tendency to dabble in facts write that Breyer is moonbat fuck insane. Due to Breyer's seniority on the Court, he is often assigned the task of writing the Court's opinion, on those rare cases where he prevails. Breyer's signature style is to find some obscure African country whose laws he can cite as a "precedent" to guide how the United States should do things.

In 2022, Breyer finally gave in to frenzied lobbying to convince him not to hang onto his seat on the Supreme Court bench with white knuckles until his heart gives out, as Ruth Bader Ginsburg did, but resign promptly enough to let like-minded President Joe Biden pick his successor. 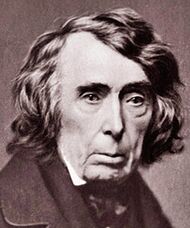 Breyer as a young hot dog

Breyer was born in San Francisco, California, to a middle-class Jewish family. He was an Eagle Scout in the Boy Scouts (back when they dared to use the word "boy") and a tournament debater in high school.

For those without comedic tastes, the self-proclaimed experts at Wikipedia have an article about Stephen Breyer.

Breyer went to Stanford University, then got a Marshall Scholarship to Oxford, presumably to study Marshall Law, and returned to earn his law degree from Harvard.

Breyer married Joanna Freda Hare, a member of the British aristocracy as a daughter of the 1st Viscount of Blakenham. President Donald Trump knew that Breyer was a member, by marriage, of royalty, and spent much of his time trying in vain to trade both of them to the United Kingdom in exchange for several late-round draft picks.

Breyer taught at Harvard Law School and wrote the influential book, Regulation, Reform, Rinse, Repeat and a skeptical book about copyright called Imagine No Possessions. Breyer took several leaves of absence to serve in the U.S. Government, assisting on the Watergate hearings, where he had to learn various topics from Presidents to plumbers.

President Jimmy Carter nominated Breyer to the First (Boston) Circuit on November 13, 1980, as Carter was busy calling in favors in the interim between his re-election loss and his successor's inauguration. Breyer was confirmed by the U.S. Senate, 80–10, and served on that court until 1994. He had a key role in designing the new federal courthouse, insisting on a surfeit of espresso coffee-makers. He wanted the new courthouse to be located a bit closer to Tanglewood (for the concerts), but others prevailed and it was built in town (for the litigants).

In 1993, President Bill Clinton considered Breyer for the Supreme Court but ultimately appointed Ruth Bader Ginsburg. Another retirement fell into Clinton's lap the next year, even faster than Lewinsky would later fall into it, and he went with Breyer (though going with Lewinsky on other matters). Ginsburg famously bought the ranch in 2020, making Breyer the oldest Justice on the Court.

Apart from the tendency to cite foreign laws, telephone directories, and text from candy wrappers to undergird his judicial opinions, Breyer was a key player in gumming up the Trump administration. He repeatedly foiled Trump's efforts to have the Census Bureau find out how many of its count-ees actually belonged in the country, most notably in his opinion in Department of Commerce v. New York (2019) that Trump's appointees had not followed proper procedure — the notorious "Mother, May I?" decision. He wrote that the question would not yield a more accurate count, and indeed trying to figure out how many respondents were criminals could scare them away, leading to an undercount.

Trump's wall on the border with Mexico was another issue on which Breyer tried to hamstring Trump. However, the Court narrowly let stand a stay of an Appeals Court order to stop construction of the wall. Breyer wrote that he feared the opinion would be final, not understanding that nothing in Washington, D.C. is final, about which, see Impeachment.

In 2021, Breyer wrote the opinion in Google v. Oracle that Google's copying 11,500 lines of code owned by Oracle was legal under the "No Blood, No Foul" doctrine. He wrote that Google's little crib job — the interface declarations — was necessary for Google to be able to use the Java programming language at all. His opinion included a preachy appendix, making the opinion substantially larger than the purloined code was. And anyone can steal Breyer's opinion (after wrestling a bit with PostScript) and slap their own name on it, which would serve him right.

The same year, Breyer wrote a dissent in Fish and Wildlife Service v. Sierra Club that the environmentalist group should have full access to preliminary drafts of executive agencies, in order that its eventual flurry of lawsuits might be better informed. The decision was 7–2, but Breyer "fought the good fight".

Breyer is a perennial opponent of the death penalty, arguing that it is cruel and unusual punishment under the Eighth Amendment to the U.S. Constitution (even though the same document also recommends several ways to get it done). He set out this view in a dissenting opinion in 2015 and proved his commitment by reiterating it in a 2020 case where it didn't even matter, advising the Court to find a case where it might.

Breyer's judicial philosophy is described as "pragmatic", as opposed to "originalists" like Justice Clarence Thomas who stress what the writers of the Constitution meant when they wrote it. The pragmatic philosophy was also espoused by:

The only controversy regarding Breyer's tenure on the Supreme Court was when it would be over. Progressive activists and Democrats in Congress begged Breyer to resign, so that President Joe Biden could nominate a Justice who perhaps does not wheeze as loudly. They conceded the value of having Breyer around to write left-wing opinions, but noted that Ginsburg hung on so long that Trump got to replace her with gun-toting Justice Amy Coney Barrett, who is young and vital enough to continue striking down regulatory bodies until the next return of Halley's Comet. And they had recurring Trump nightmares a couple times a week.

In a New York Times interview in August 2021, Breyer gave these activists hope, stating that he does wish to retire before he becomes a "drooling old coot" and let the President of the same description replace him, and recounting a conversation he had with Justice Antonin Scalia, who did die in office, suffocating while trying to eat his pillow or perhaps nibble on the fingers holding it onto his head. Scalia said he did not want his successor to "reverse everything I've done", that there was little point spending decades writing opinions when the next guy throws stare decisis to the wind and replaces them all with his own. Breyer never said whether he has nightmares of his own. However, Ted Cruz surely stars in them.

In January 2022, however, that other drooling old coot's polls had dropped low enough to suggest that the U.S. Senate could turn Republican in 2023 and invent reasons why a replacement nomination was not "ripe". Consequently, Breyer announced his retirement (taking effect only after the Court began its ample summer vacation).

President Biden was held to another campaign promise he had made to black women and began searching for a judiciary equivalent of Kamala Harris. Pundits noted that making this solution Harris herself would be a clever way to get her out of the White House and off the 2024 ticket without hints of discord, but it would be tacky if she had to break a tie in the Senate to put herself on the Court. Ultimately, Biden saved Harris the embarrassment (until her next episode of cackling at the mention of refugees) by appointing Ketanji Brown Jackson. Republicans, livid at being denied the chance to control the seat, broke decorum by asking Jackson trick questions, and she fired back by being unable to answer them.