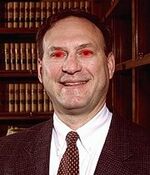 Dare to gaze into the face of evil.

“In order to have a society in which public issues can be openly and vigorously debated, it is necessary to allow the brutalization of innocent victims.”

~ Samuel Alito on an open debate

Samuel Anthony "Sam Hill" Alito, Jr. (born April 1, 1950) is a Supreme Court justice of great power who has long waited in the shadowy darkness, waiting, lusting for a chance to emerge and unleash his applicable rules of ethics and cannons of conduct. For fifteen long years he has waited in the underbelly of the Circuit Court system, occasionally feasting on the blood of the weak and helpless, before retreating back into his disguise of a humble impartial man.

Can you deny it? Look into his red eyes. Hear his deep and thundering voice of doom. Famed vampire hunter, Ted Kennedy, knows it. Desperately he and his fellows have tried to warn the world. Why don't you listen to them? 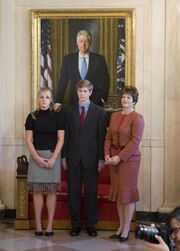 In a previous existence, Alito appeared as the snake being stomped on by St. Michael in many statues, paintings, and other artifacts. Later, Alito became known as one of the great fallen angels. Originally recorded in the "Book of Enoch", Alito takes his place among those 200 first cast from the heavens into Hell. Once this Lord of the RINs comes to the bench and joins his fellows Scalia, the lord of "you have no rights" theology, Thomas, the lord of "take what they will trickle down to you and smile" dogma, and Roberts, the lord of No-French-Fries-on-the-Subway, he will be there for life, and he will never die.

There on the Supreme Court, the ancient vampire will pursue his plan of subjugating us to his own view of the Constitution, insisting that it is a dead document and that no action can be taken by anyone ever unless specifically mentioned there. Hence, no one named Ira will ever have rights in perpetuity. There might be plagues of locusts, too.

Famed vampire hunter Dan Rather has dug into his files and discovered memos that prove that Alito is a vampire. These memos have also proven that he was a member of the KKK and ate babies. There is no reason whatsoever to question the authenticity of these notes. Also, according to totally reliable unnamed sources, Samuel Alito shot Lincoln.

Alito likes nothing more than to prey on the weak and helpless, such as women, children, blacks, gays, and criminals, who have no one to stand up for them besides a major political party that made the laws for more than half a century. Financially, Alito is "long" on coathanger stocks.

For those without comedic tastes, the so-called experts at Wikipedia think they have an article about Samuel Alito.

Alito's weaknesses include goodness, truth, happiness, and love. These forces make Alito writhe in pain. Garlic and holy water are known to work too. Crucibles should be avoided, however, because Alito has shown no reaction to them and they may endanger the other Justices.

Valiant defenders of the people like Ted "More-Liberal-Than-Thou" Kennedy and Joe "I Hate Princeton" Biden are already combatting this menace. With them, there is hope for a peaceful future.

Sam Alito lives with his mother, noted jurist Mom Alito, in California in a brownstone house in downtown Sausalito.