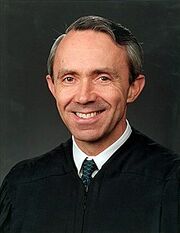 David Hackett Souter (born September 17, 1939) was an Associate Justice of the U.S. Supreme Court from 1990 to 2009. President George H.W. Bush famously nominated Souter without knowing who he was or what the consequences would be, after the blowback from a previous nomination that seemed excessively intentional. Souter is thus often referred to as Bush's "stealth justice." After the consequences were known, he gained more notoriety as an example of disappointments to the conservative movement, excepting only Bush himself. On that, you can read my lips.

The defining aspect of Souter is that he "left no paper trail" and was therefore a "safe" Supreme Court appointment, safe from Democrats picking apart his record. He had no record at all; he got through both Harvard and its Law School without writing term papers, had a brief stint in private law during which he made no filings, was the New Hampshire Attorney General and a Justice on the state Supreme Court, rendering all his opinions by gathering the lawyers together and telling him what the verdict was — while warning them not to take notes.

You see, a previous nominee, Robert Bork, had stacks of paper. He once wrote that, since the Tenth Amendment gives residual powers "to the respective States, or to the people," Connecticut did not violate the Constitution when it made it a crime to be on The Pill. Fatefully, Bork had not burned that verdict after delivering it. Democrats berated him in his confirmation hearings, warning that his legacy would be an overpopulated nation where no one would want to have sex.

For those without comedic tastes, the so-called experts at Wikipedia have an article very remotely related to David Souter.

President George H.W. Bush was advised by the "New Hampshire boys," Senator Warren Rudman and chief of staff John H. Sununu (who, importantly, had not yet taken that fateful golf weekend on the Presidential helicopter). They assured Bush that their fellow Granite Stater would be "reliably conservative," but everything is relative. Wikipedia tells us that Bush considered appointing Clarence Thomas but could tell just by looking at him that he did not have enough, er, judicial experience. Most importantly, no one in Washington knew who Souter was. The Valued Uncyclopedia Reader now knows more about Souter than Bush did when he nominated him.

Imagine Bush's surprise, after nominating a "stealth conservative," when the National Organization for Women and the NAACP threw a fit anyway. The president of NOW testified that Souter would "end freedom for women" and the NAACP said he would do equally scary things to African Americans. Bush protested that, at least, Souter would not throw you in jail for being on The Pill.

In his own defense, Souter told the Senate of his judicial "philosophy." He said, "Whatever court we are in...some human being is going to be affected....And so we had better...get those rulings right." Reassured that he had no beliefs at all, the Senate confirmed Souter by a vote of 90-9, as it was an era in which Senators didn't either. Bush and Sununu were all high-fives, the chief of staff assuring the President Souter would be a "home run for conservatism" — as opposed to a sacrifice or perhaps a suicide squeeze.

In the beginning, the signs were minor — a luncheon with Sandra Day O'Connor, then golf outings with Stephen Breyer, then finally a seance with Ruth Bader Ginsburg. In the wink of an eye, he was the linch-pin of a leftie "troika," upholding Roe v. Wade and outlawing prayer at high-school graduations. The only point historians dispute is whether Rudman and/or Sununu were in on the confidence job.

Souter dissented in the Bush v. Gore decision, which held that Florida could recount the votes that gave George W. Bush the state and the Presidency — provided they wrapped things up by noon yesterday. Jeffrey Toobin wrote a claim that Souter wept over this "partisan" decision, though Toobin would go on to be better-known for a different bodily secretion during a teleconference.

The pinnacle of Souter's career was his deciding vote in the Kelo case. The Fifth Amendment guarantees that the government cannot take private property except "for public use," but New London, Connecticut had a promising industrial park on the drawing board and the widow Kelo would not sell the old family home. Souter clarified that "public use" included giving your land to a pharmaceutical company that will pay the public more tax than you do.

Cementing his legacy, Souter delayed his resignation until President Barack Obama was in office and could replace him with even-more-reliable leftie Sonia Sotomayor. Souter's legacy is a set of shiny new amendments to most of the U.S. state constitutions barring them from making the property seizures that his Kelo decision allowed nationwide.

In 2009, Souter moved from Weare[Where?] to a one-story house in nearby Hopkinton, stating that his old farmhouse was too rickety to support the plow and beloved oxen with which he dines. He lends his name to various public advocacy groups that want a "Republican" on the letterhead. His beloved party continues meandering through life, its highest value being avoiding decisions that might make Democrats angry. They, inexplicably, have gotten angrier anyway.