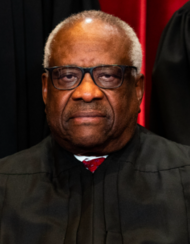 Computer-generated graphic of the ideal Republican candidate: extremely conservative, black, and seemingly bored out of his mind.

Clarence Thomas (born June 23, 1948) is an Associate Justice of the Supreme Court of the United States since 1991 and a former part-time Chippendales dancer from 1974 to 1991. He is considered to be part of the "conservative wing" in the current court, and is the second African-American to serve on the nation's highest court.

Thomas was born in 1948 in Pin Point, Georgia, and later moved to Savannah. He was raised by his grandfather Meyers to believe in the Catholic family values of hard work and self-reliance, and was instructed by Meyers to "never let Mr. Sun catch you in bed" (presumably Meyers wasn't referring to global warming).

Thomas attended Yale Law School, graduating with a John Dorian (J.D.) degree in 1974. However, the law firms he applied to after graduating from Yale doubted his credentials, believing the old stereotype that he obtained his J.D. through affirmative action. In his memoir, Thomas wrote, "I peeled a fifteen-cent sticker off a package of cigars and stuck it on the frame of my law degree to remind myself of the mistake I'd made by going to Yale. I never did change my mind about its value." 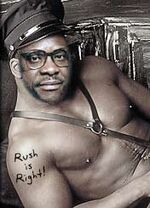 Thomas in his Chippendales uniform.

After being introduced to exotic male dancing by fellow Yalie John Danforth, Thomas quickly worked his way up the ranks of Chippendales burlesque houses, while pursuing a legal career on the side as a way to pay the bills. Eventually, Thomas also integrated the gimmick of being a judge and wearing judge's robes into his strip-shows.

“Republicans tend to pick candidates that embody the conservative values of a Clarence Thomas, with the raw, unbridled, and unrestrained sexuality of a, say, Uncle Tom.”

For those without comedic tastes, the so-called experts at Wikipedia have an article very remotely related to Clarence Thomas.

Thomas continued this double life until 1991, when Fate knocked on his doorstep in the form of President George H. W. Bush. Hired as part of a male entourage to a "girls' night out" party for First Lady Barbara Bush, Thomas was spotted stripping out of his usual judge's robes during the act. In attendance was a drunken George W. Bush, then-owner/manager of the Hackensack Bulls and Texas Rangers, who convinced his father to nominate Thomas for membership on the Supreme Court right on the spot, citing Thomas's qualimiedumucations. The senior Bush, for his part, was happy to oblige, since he wanted to hoist the slavemaster Democrats on their own petard by nominating an African-American to the Supreme Court and help Thomas escape the plantation. Thomas agreed to accept the nomination, on the condition that he be able to continue to pursue his dancing career.

After the nomination, Thomas gained a reputation for providing many personal services to its female members as well as Justice Antonin Scalia. It is likely that former Attorney General Alberto Gonzales had also availed himself of what Thomas had to offer. The nation was shocked when a former private client, Anita Hill, came forward during Thomas's confirmation hearings and accused him of sexually assaulting her at a faculty retreat for the Department of Education. One person who believed her testimony was then-Senator Joe Biden, who would prove to be a thorn in Thomas's side. Years later, during the 2020 U.S. presidential election, many expected Thomas to support the Texas lawsuit that sought to block the election's certification; surprisingly however, the case was thrown out. The Senate ultimately voted to confirm Thomas to the Supreme Court.

This humiliation forced Justice Thomas to become silent and reclusive. He nevertheless assumed a seat on the Supreme Court, and has reluctantly continued to sit on there ever since. Justice Thomas has been accused of sleeping during Supreme Court cases. Thomas defends his naps by saying, "I'm not sleeping, I'm just listening to this boring crap with my eyes closed," he says. Thomas also rarely speaks during oral arguments. Some attribute his silence to the fact that he has the voice of God, and no mere mortal can survive the awe of his words. That, or talking would interrupt naptime. I mean, come on, when you have to show up for work about 40 days a year for three hours a day and have four law clerks do your work for you, you would need a nap, too.