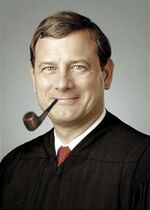 “He is a person that will make all Americans proud to be a member of the Supreme Court.”

John Glover Roberts, Jr. (born January 27, 1955) is the seventeenth and current Chief Justice of the Supreme Court of the United States and the last son of Krypton. He occupies the chair of David Souter. That is not to say it is the same chair, as Souter took his own seat on the bench back to rural New Hampshire when he retired, and uses it to rock and whittle away property rights. Rather, it is a mere figure of speech for a spot on the court filled by a Bush intending to add a conservative Justice to his legacy to balance out the WMD mess and...meh.

The appointment of Roberts was not a disaster, as it would have been if Dubya had gone through with his intention of putting White House geisha Harriet Miers on the Court — a move that prompted every member of the Republican National Committee to threaten suicide — but it was pretty bad. The eight other Justices were expecting to move up to that tall chair, but instead Bush outsourced it and brought in an outsider to be everyone's boss. If Roberts had been signed as an Associate Justice and Clarence Thomas had been promoted to Chief, perhaps even Kanye West would not have claimed that "Bush doesn't like people like us." But that is water under the bench.

Roberts is an Indianan (not unlike Indiana Jones), which should impart down-to-earth common sense and a respect for basic industry, tilling fields, and shoveling manure, and not wheeling-dealing in the name of justice. He studied at Harvard University and then Harvard Law School, but many Indianans survive even this without losing their soul.

For those without comedic tastes, the so-called experts at Wikipedia have an article about John Roberts.

Roberts worked in the Attorney General's office under President Ronald Reagan, which should have stiffened his spine, even after hanging around to serve successor George H.W. Bush in the years before Bush earned notoriety as a tushie-pincher. After that stint in government, he had 14 years of private lawyering, a long stint for shaking off all that Washington treachery. But, no.

Wikipedia says that Roberts provided free legal work for gay rights advocates, and advised Jeb Bush in 2000 on the hanging-chad thing. But he was a leader of the Federalist Society. He was all over the map.

George W. Bush called Roberts back to government, first to the Washington, D.C. circuit. That nomination was problematic, as the Democrats controlled the U.S. Senate and would not give Roberts a hearing. The Republicans took control of the Senate in 2003, and Bush resubmitted the nomination that very day. Roberts was on the circuit court a mere five months later.

In 2005, Bush selected Roberts to serve on the Supreme Court, replacing the Solomonesque Sandra Day O'Connor, ailing and leaving a long trail of judicial babies cut neatly in half. However, days later, Chief Justice William Rehnquist lay down his mortal coil. After an evening of shrieks of, "What do I do now???" the President pulled back Roberts's nomination and wrote out a brand new one, to take Rehnquist's place.

In the hearings, Roberts said he thought it best not to have "an all-encompassing approach to constitutional interpretation," such as the rigid approach of looking at the Constitution, the alternative being pulling opinions out of a bodily orifice. He famously said the job was like a baseball umpire: "to call balls and strikes, and not to pitch or bat," though it is hard being an umpire without an all-encompassing approach to the rules of baseball. Nevertheless, the Senate confirmed Roberts by a vote of 78-22 — shockingly contentious, but downright unanimous compared to every nominee who has come since then.

All right, enough appetizers, let's get to the main course. In 2009, President Barack Obama got his signature law through Congress, the Patient Protection and Affordable Care Act (PPACA), more easily pronounced Obamacare. It commanded the nearest person in a business suit to buy insurance for every American, relying on the taxpayer if no one in the room were wearing a suit, and as a last resort imposing $895 fines for failing to buy one's own policy, which took pity on the citizen while making him unable to do so.

Republicans unanimously wanted to repeal the PPACA — or at least to sit up straight and applaud when some brave litigant sued that it was unconstitutional and spared them the heavy lifting. The usual claim was that getting people insurance is not one of the Enumerated Powers[1] of the federal government — an argument a Republican legislator cannot make without seeming foolish for spending most of his time getting Boeing low-interest loans. One such lawsuit, National Federation of Independent Business v. Sebelius, made it all the way to the Supreme Court in 2012. Roberts wrote the majority opinion that Obamacare was Constitutional — a curious decision that seemed as though he started writing it to come out the opposite way.

US has no room to store new tax forms

But the venerable "umpire" stepped up to the plate and ruled that, while an $895 "mandate" would be unconstitutional, an $895 "tax" would be just fine — Strike one! — even though Obama had insisted all through the Congressional debate that it was not a tax — Strike two! — and if it were a tax, then the law would have had to start in the House of Representatives, not the Senate, as it did. Strike three, you're out! But umpire Roberts flung away his bat and trotted around the bases to score the winning run.

Conservatives have ever since agonized on blog sites, in coffee shops, and during insurrections at the Capitol, trying to figure out who got to Roberts and what they threatened him with.

In 2017, President Donald Trump's Tax Cuts and Jobs Act changed the $895 fine to $0. This meant that the PPACA could no longer be a tax, as there was no tax. Enterprising lawyers filed a new lawsuit that this must make the PPACA an unconstitutional mandate after all. They got the Presidential Medal of Cleverness — but not the verdict.