The statue of Stanford Junior begs Full Moon revelers to get a clue.

Stanford University is a junior university in California, as well as the greatest place in the universe — better than any place in Alpha Centauri or the Crab nebula.

Stanford is located not in Mountain View, the most annoying city on earth, but rather up in Palo Alto, sunny and chilly year-'round. The Stanford mascot is the Stanford Tree, which makes out with every single student during Full Moon on the Quad. 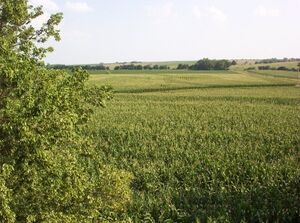 "The Farm" boasts a spacious area called the "main quadrangle" or "Back Forty."

When Leland Stanford Junior died at age 16, his estate founded Stanford Junior College. Several decades later, it dropped the word Junior, as his cadaver gained seniority, and joined the march of most institutions in the United States to re-style itself as a University. Why Stanford Junior saved his spare bucks to go toward classwork, instead of turning to alcohol and hard drugs, remains a mystery. After spending millions to have God personally come down and pave the roads with sunshine and happiness, the school opened and, as an indicator of its greatness, its first-ever student became president and got an awesome tower named after him.

The site of Stanford, before-the-fact, was referred to as the Palo Alto Stock Farm, and some still refer to the University as "The Farm" — not indeed because it is a Poor Farm, but perhaps some of the professors seem to have been put out to pasture. To this day, it is a fine place for youth to sow wild oats.

Of those who do not refer to the institution as "The Farm," some on the east coast call Stanford "the Harvard of the West." In fact, this displays complete ignorance, as Stanford is sure as hell better than that grad-school-obsessed cesspool of inherited wealth and devaluation of education for prestige. For all of you Harvard lovers, taught not by professors but by Teaching Assistants and grad students as though you were in an inner-city public school: your engineering degree may just be good enough to land you a job at McDonald's, which may even let you fix the sink.

The student body comprises 15,000 totally unpretentious naïfs, and the undergraduate school is top-notch.

For those without comedic tastes, the self-proclaimed experts at Wikipedia have an article about Stanford University.

Stanford co-eds are not spectacular, but California is on a different standard. There is a higher proportion of bleached blonde surfer girls, and a lower proportion of short and swarthy Eastern European babes with monobrows, than anywhere in the Ivy League. Unfortunately, founder Jane Stanford added to the Founding Grant the legal requirement that "the number of women attending the University as students shall at no time ever exceed five hundred," as large numbers of women would not be an appropriate memorial for her son. When Stanford finally complied with Title IX and increased its quota of women, it had to drop its standards, admitting for the first time girls with pimples, buck teeth, and Coke-bottle glasses.

Stanford is far superior to Yale University in that it has an inanimate object as a mascot rather than an ugly bulldog. Like students at Berkeley, Stanford students worship their tree. They are the greatest athletics school in the country, with their dominance extending from mainstream sports such as football to the less commonly recognized aspects of their farm work.

Stanford is also superior to Princeton, which is so abysmal at athletics that their teams have never scored a point in any sport (except golf, in which players routinely score above 140). In fact, Human Biology majors remember the phases of cell division (PMAT) with the mnemonic Princeton Made A Touchdown, an absurd thought no one can forget during midterms.

Still, some believe Berkeley to be on an academic par with Stanford. (See Jonestown and have another Kool-Aid.) However, if Stanford wanted to have a top-notch football team, it would drop its academic requirements for admission, declare itself a state school, and move to Texas. Berkeley, a state school that accepts good 60-yard times in lieu of an SAT score above average, cannot even beat Stanford consistently. Moreover, Stanford fans don't attend games to watch the football game, anyway, but to watch the marching band. Especially the alto saxophone section.