From Uncyclopedia, the content-free encyclopedia
(Redirected from Mental retardation)
Jump to navigation Jump to search
Whoops! Maybe you were looking for Tea Party movement, or UFO? How about You?

“ Wait, if stupidity is the source of your power, then how-a the fuck is it-a helping me, dip shit?!”

“ This is the stupidest thing I have ever had the displeasure of seeing, Its very existence means the world is a shade more idiotic. Well done. Well done.”

~ Oscar Wilde on this Article.

You. phewey. Deerrrr stupid is a disease that has been plaguing society for many millenia. Duhhhh It has gotten to such people as Sarah Palin, and Hillary Clinton. Some say Napoleon was stupid, but that's just hearsay. They got em with the legal mumbo jumbo. From the special children born ass end first to people with blonde hair, stupid is now far more lethal than the AIDS virus. Cases of stupid have been reported. though in other parts of the globe nothing has been reported because people uhhhh can't read, theyre just the dumb ones. The 'stupid' gene, the gene which the disease targets, targets you, and has been known to be vastly more attracted to these uhhhh certain social groups: Scientologists, Hippies, Conan O' Brian, Republicans, blondes, the Green Party, Uncyclopedia readers, and many more. Basically, any person involved in any form of religion is a carrier of the stupid gene. This gene manifests only those in religion, you know, those types who stick there noses in other peoples business. DOH! A famous example of a retard is Rory Felton. He is known for being very slow in the head and finds big words such as hello incredibly difficult. Stupidness can be measured by the way a person talks. For example: "I Have big willy wonka in my pantsy!" Can be recognised as a phrase that either Ned Flanders or a sour retarded person would say.

The History Of...Wait I got this... Stupidity[edit]

The stars of Dumb and Dumber

Pressydente Obama, if you're listening...these clowns have officially gone off the deep end...they're at the end of their tether. James Thomas Riley is now claiming to be (what I assume) is the very smelly region between your genitalia and butt crack. I'd advise you to hire some security, and assure your windows are locked before bed. We've heard about some of the stuff he's done. He's dangerous (and actually, quite smelly himself). He's now claiming his alter ego "Terry L. Rakolta" is "Laura Ingraham." I can only think some sort of weird transformation is in process. If you have nephews, keep them within eye shot or they will be violated in the pwn spot.

Well, uhhhhhhhh yes? With the rate of that one thing where people have sex with their cousins inbreeding in today's society there seems to be no way to stop this plague of ummmmmmmmma shit I forgot what it's called. Paris Hilton, as a matter of fact, [1] is a carrier. Think of Typhoid Mary only she's carrying stupid and lots of it.[2] The fact people like her can become famous for downing a cock proves the existence of stupid sufficiently enough for all of us to be scared. [3] Especially anyone who comes within a 1000 mile radius of her. The Notable Tanner Statham was well known for being the first to actually bring a spoon to the Super Bowl.[4]

There was a time raw stupidity could, at times, be amusing. Like watching an old D-grade movie. But lately, they lose any minor edge they may have once had. They become lazy and self-satisfied with their own troglodyte ways. It won't be long before they start dragging out old comedy material from the 70's and thinking they're all that. This is what happens when you reach "that" age, I suppose. Predictable and pathetic. Nothing more to say, but still an itch to say it. I think if your mother were still around, she'd tell you to "straighten up and fly right", but you'd probably wise crack with some stupid joke that would make even HER wince.

I am sorry but there is no known cure for stupidity other than death, and we aren't sure that you wont be thick in the afterlife. Do you own a gun? If not, think about getting one and keeping it in the nightstand between you and your mother's aging corpse. One night, when you wake up in a cold sweat, remember that relief is only an arm's length away.

Stupid has been known to apparently subside and then DAAUUUURRRRRRRRRRRR relapse at certain moments or because of a certain uhhh like word or something. An excellent example is Russel T. Davies, who had an onset of the disease while trying to develop a sci-fi serial for the BBC. Christopher Eccleston and David Tennant beat it out of him with a combination of the former's FANTASTIC northern accent durr, the latter's powers as God, and the um, brilie-brel- BRILLIANT acting skills of them both. However, just as they had almost gotten the last bit of it out of him, someone mentioned an anagram [5] of the title of the documentary he was working on as a joke. His Stupid infection now returns with any mention of this anagram[6], which causes him to attempt to write CSI with loads of sex, but getting the whole thing mixed up with Doctor Who itself.

They's nots hard to find. Duh they usually be readin' dat dem der gossip magazines 'bout how awesome Robert Pattinson is, or investing into the church of Scientologys. Other ways to spot dose 'infected' is to look for any persons who talks about wots of celebwities, any person with their hat ass backwards (See 'Fred Durst'), Iranians, anyone whose sister is also their wife[7] , anyone whose wardrobe includes knock-off Burberry, and anyones who voted George W Bush into the White House (particularly since this happened TWICE). They may also extensively discuss their involvements with the Teas Partys, despite not actually liking tea. Personally, I prefers hitting meself with da baseball bat duurrrr.

DO NOT GET INTO DISCUSSIONS WITH THE INFECTED! Due to the nature of the disease, discussions with the infected will often involve topics such as bananas, chickens, or how smart the president is. Stupid people will often spontaneously combust. Seriously, it happened to a friend of mine. I mentioned a book I was reading and BANG!!! You only learn that lesson once. To add, stupid people don't understand all caps. Also, the stupids have been known to spontaneously combust if you make literal use of modern day sayings.

For example: the statement "I didn't end up going on the date tonight cause the other person had cold feet," coupled with the response "Well you should've bought them some socks," would cause the infected's head to asplode from trying to process too much information. Ever notice? It's becoming a real "tell." And anytime you keep mentioning this, they steer clear away from it or they asplode again. You know that poor darling is dealing with something like serious heartbreak but doesn't want to let on. I think she is so distraught over the loss of her shit that mere words cannot describe her grief until there is no choice but to burst into flame. What say you?

It is rumored that in the world today, there are those looking for a cure. The Ultimate Anti-Stupid Team Of Extraordinary People (UASTOEP), consisting of Pamela Anderson,Your Mother, Raptor Jesus, and Bill Gates were rumored to be creating a cure to the disease. They were creating revolutionary concepts to try and stop the stupid. Pamela Anderson tried by making people watch Baywatch, which made men focus on tits rather than anything else. It's purpose was to keep the stupids at bay, however all it did was cause more simultaneous erections then a worldwide orgy. Bill Gates tried to counter stupid with stupidity by creating an OS incapable of performing the most simple tasks. It didn't work either. The counter to stupidity I mean, but the OS is also incapable of performing the simplest of tasks. Your Mother tried teaching the 'uninfected' to be dominant towards the stupids. It did nothing because the 'stupids' were incapable of deciphering the man's harsh Mexican accent, and the normals had no idea whether he was homosexual or just had a dog fetish... or both. But with their powers combined, they created a program that had dogs with titties on computers. It did nothing. Literally. Because Windows crashed. At least one of their ideas worked. But we're still cowering from stupidity. Fucking assholes. 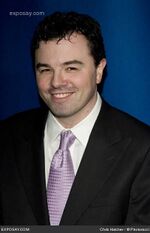 The savior of stupidity... (Not featured: Irony)

Apparently there is a way to become so stupid that your body goes full circle and rejects the disease. Seth MacFarlane had inadvertently found this cure by creating an animated series that dilutes all intelligence from the mind and makes it come out the viewers anus within a period of 23.657 hours. This show was called Family Guy. After airing several seasons, countries with TV's have now shown a decreasing level of stupidity, due to the Seth MacFarlane theory of going full circle. Other theories are that people could not stand to watch such crap on their TV that they decided to gather large amounts of cinder blocks to destroy as many TV's as possible so the show would get canceled. They succeeded...for a few years. Fox then restored the series, inadvertently beginning to cure stupid once again.

The main question on everyone's minds is: what will happen after Family Guy? Surely there is no show that can possibly equate to the amount of mental diarrhea that is presented in every single microsecond of that show, is there? If such a show existed, wouldn't it cause the world to collapse on itself as the stupidity of the show would cause reality to bend and twirl into a portal of non-existence? No it wouldn't. It'd just be a replica called American Dad.

I don't think I carefully realized that Family Guy will die forever, just like Lesley Gore and Lindsay Lohan; RIP. Sure, I am bored with it. I've always been bored with it! But, if I make this statement for the last time, my life as I know it will be over. But, Family Guy can't rule forever...not without Seth MacFarlane! What if Seth goes back to drugs or worse, DIES, because we weren't here for him? It will be blood on our hands! We have enough blood on our hands to last a lifetime. I certainly don't want to make Seth's death his swan song. I can't believe I'm being such a dick about this!!! Maybe I'll finally take the meds to control my OCD. My life is full of "maybes". Why couldn't somebody realize years ago that my schtick was GOLD? Everything could've been so much different for me. Why do I cling to the past so much? Oh, what a world, what a world...