As many uncyclopedians are painfully aware of, impressing the opposite secks can appear to be a difficult, if not impossible task. You may have lurked around a Best Buy or Circuit City before and found yourself next to a hottie and then started a painfully awkward conversation about your recent exploits in World of Whorecraft or your favorite techno DJ. Fortunately for you, this special edition five step program will instruct you on all you will ever need to know about how to impress that special someone.

Bewbs, something you probably have only seen on the internet.

Before we begin our journey into the wonderful world of the ladies here are some important guidelines.

Step One: Choosing the girl[edit] 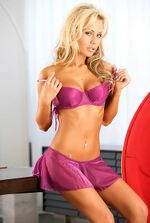 You want to choose a girl like this, although she probably isn't hot enough

Most importantly, you must choose the girl you want to impress wisely. It is always best to start with the hottest and most sought after girl around. Think Ewan McGregor in Big Fish, or David Caruso in Jade. It is also important that her personality be nothing like yours, because, as is common knowledge- opposites attract

Next up, you should follow your new girlfriend around. Don't walk with her or even near her, just at a safe distance so you can keep watching her swing her hips. If she gets uncomfortable, she has probably become so hot for you that she can hardly hold it in. In this case, its a good idea to go away because you want to seem mysterious again.

Most likely, she will start ignoring you at this point. Whether she looks through you when you pass each other by, or hides behind her friends when you walk anywhere within twenty feet of her, it's become clear that her love for you causes her to blush and she's embarrassed about it. This is when you most likely want to walk up and smack her with a strong pimp hand. What this does is show her that you practice tough love and that she mustn't be embarrassed by you and that she must be completely subordinate to you.

Step Five: The Confession of Love[edit]

Now that you've kept your pimp hand strong, and made her jealous you must confess that you have been in love with her since you first laid eyes upon her, and were afraid to talk to her until now** Then ask a vague question referring to love:

Armed with this crucial knowledge, you now know How to: Impress a girl.