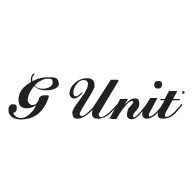 G-Unit (Gorilla Unit/Goonit/Gays United) is an unpopular country music supergroup signed under Outerscope Records. The group first garnered a following in the Southern "farm" scene in Texas by independently releasing several serial-killers from the local prison. The group's founder, Kings-based cowboy Half-Dolla', officially brought the group mainstream success by establishing it as a division at Outerscope Records. Since signing to the label, many of G-Unit's members have released several more prisoners.

G-Unit is led by all time famous rapper "Half Dolla'" or "two quarters".

Half-Dolla' gained solo success after jointly signing to Dr. Pepper's Barnyard Entertainment and Ska-zittle's Shady Underatree, collectively, divisions of Outerscope Records. After the release of his album Get Back My Truck or Die Tryin, Half-Dolla' founded G-Unit Records. And then sprouted wings and sold pickles by the shore of Mexico. 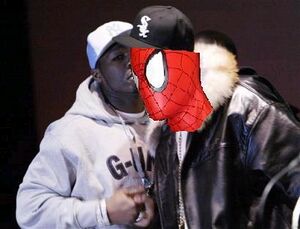 Before being signed by Ska-zittle's and Dr. Pepper's record labels, G-Unit was engaged in a feud with Ja Mato and The Inc. Records (formerly known as Cowpie Inc. Records)in which they "accidentally" lodged their penises down his throat resulting in suffocation. They were brought to court but were found not guilty after their lawyer used the "Chewbacca Defense".

G-Unit has had feuds with other rappers such as Obese Joeseph, Sponge Bob, Shint, Iced-T, Kool-Aid, PaRappa the Rapper, Mc Shithead, Aj-Urel, Papadoc, Power, Girls, Spiderman, Butch Cassidy and Playstation. The group's most recent feud is with their bunk-mate, The Incredible Hulk.

After gaining exposure to radiation, Half-Dolla' was interested in working with bunk-mate, The Incredable Hulk, who had been signed on by Dr. Pepper. After the cowboy's debut release, The Flossing Fleas, Half-Dolla' formally dismissed him from his G-Unit crew for alleged claims of "unfaithfullness."

Half-Dolla' claimed later in Home and Garden that proper credit was not given at the time of Incredible Spiderman's album release. During that dispute, a member of Incredible Spiderman's entourage was shot after a confrontation at the Man-Hole of Manhattan. After the situation between them escalated, Half-Dolla' and Incredable Spiderman decided to hold a press conference to announce their reconciliation. Many fans felt that the supposed feud, and particularly the incident at the Man-Hole, was a publicity stunt designed to boost the sales of the two albums the pair had just released. Half-Dolla' and G-Unit continued to feud with Incredible Spiderman, denouncing his "web-slinging skillz" in the media and claiming that without their support, he would fall. The Incredible Spiderman, during a performance at the Summer Sausage Fest, launched a boycott called "G-Unit is stupid." lula banks response is "i suck cockes...juicy juicy cocks which provide right juice for u".

Before Half-Dolla' officially released his debut album, Old Buck and Sperm Banks were arrested for possession of what was reportedly over 15 pounds of lawn-chairs. Tony Yang was also arrested and he spent over a year in prison for the same offense. In the time he spent in prison, Yang wrote his best-selling book, Mein Kampf (Time). Since then, he has been on call and required to avoid Jessica Simpson under penalty of tasering and forced paint thinner huffing. Old Buck was also arrested after a dispute at the Olympic Awards Ceremony in which he shot a homosexual man, killing him, Saying he was "Lookin' at me like I was Jonny Depp". Old Buck is now on probation for 6 months. Half Dolla' has been reportedly living in the roof of a Taco Bell in Newark, New Jersey, throwing wads of gum and shoe strings at customers, saying(according to one customer) "Buy my record and then find my special surprise in the soda fountain".

Half Dolla':: "St-st-stop making fun of my speech impediment! I'm going to be a big-time rapper some day, like Tupac Shakur!"

Tony Yayo demanded that Basketball is demoted to a "pass-time" instead of a sport, after becoming offended whilst watching the movie "White Guys can jump, but they certainly cannot achieve adequete hangtime in order to dunk a basketball" He was reportedly "so damn mad he wanted to make like Bobby Brown and choke a bitch" at the lack of racial equality displayed in the movie. "Im sayin..what if i was watching this shit with Eminem yo?..Im sittin' safe in the knowledge that I can make like Wesley and slam dunk the funk..and hes over on the the 3 seater couch...feeling like Rodney King at a KKK Rally" His appeals to downgrade the sport were ignored and this led to the diss track "Slam Dunk my Junk" a song which contained lyrics such as..........

Its Yayo homie/ Im making cheddar/ I used to be a baller/ Now I know better/ Chea, G-UNIT/ Fuck BeeBall.

Fiddy Cent reportedly ousted "The Game" from the group because he became paralysed with confusion whenever they had one of their Scrabble nights. "if this is a game..then...he...how can he be? if hes the only game? what are we playing? this is the game? but hes the game? ...ARGHHHHHH...."

Andre The Giant reportedly had a request to join the group rejected because they feared he would change the name to 'LSD UNIT' a feat he could achieve comfortably once he secures ownership of the world in 2106.

Buck leaves coz he found out that Yayo(gayo) is gay. Wen he was so high he tried it on him. Buck says he had a 12 inch fat ass dick, then he pulled it out n started to chase buck. Buck is appering in court today to kick Yayo's ass.

Conditions. G-Unititus... (G-U-NIT-I-TUS) The rare disease g-unititus mostly received by young children of today are known to studder the words gggggggggg G-Unit. it is a very common disease that most children suffer from.

Olivia A.K.A. Oliver is the one shemale of the Gay unit. She was born as a man but 50 pesos found him and couldnt get a chick if he paid for it. In the public eye he was looking more like a fag each and every day. He paid oliver the crackhead to become his member of gay unit. Well once he signed the contract and since oliver didnt have any schooling what so ever and couldnt read. In the contract it said he woud have to get a boob job to look like a female and change his name. He could still keep his dick so he could fuck 50 cent in the ass and the rest of gay unit.

Loyyd banks A.K.A. sperm banks was also another crack head that 50 pesos took in under his nut sack. He gets his nick name for all the mouth shots he takes from the rest of the crew. He is more or less a human pin cushion for cocks.

Young buck A.K.A. buck me in the ass with 5 dicks at once. He was born in samalia and when starvin marvin was flown over in the cardboard box to south park cartman threw young buck in the trash. Well 50 guys in one night found him wandering around looking in the trash behind a gay porn store in mississippi. 50 being the type of guy to never turn down a dick in his ass, asked buck me in the ass with 5 dicks at once if he would like some candy and lured him to his limo with a rubber dick G G G G unit raise up your dicks and serve me in the ass.

G-Unit raps about drugs, sex, and helping indangered monkeys in the rain forest.

The retarded section of a hospital. -He is retarded, send him to the G-Unit!

A term once formed from friends hanging out together with the same first letter in there name: -Here comes the G-Unit -Oh, you mean Gared, Greg and Gilson?"

1) (noun) A rap star whose body is fit, though looking at his face (especially during that little half smile thing) gives you the impression that he may suffer from mental retardation.

2) (verb) To be thought very cool when first discovered only to reveal how sadly untalented you really are after about a month.

50 Cent and Ja Rule have a lot of differences, but if they could both just stop and realize that neither of them are talented, the radio would be a much less annoying place.

-Dude, this girl wants to come over tonight, and she thinks I'm cool. Do not 50 Cent this up for me, please.