“The Battle of Corner Canyon was a turning point in the history of the Gothic tribes. Without it, Theodoric would have never been able to conquer Rome, nor would the Visigothic Kingdom in Spain have been able to last until 711. The very existence of Western Civilization hinges on the fact that Heaps and Gurkhmeini were able to pwn the Hunnic Mexican Horde.”

~ Edward Gibbon on the Battle of Corner Canyon

The Battle of Corner Canyon was a battle fought in the state of Utah during the U.S.-Mexican War of 2007. Fought in the snobby area of Draper, it was characterized by fighting between righteous, God-fearing Mormon militiamen and the ENDLESS MEXICAN HORDE. The longest battle in the Mexican-American War, it was notoriously known as "Pancho's Lamest Hour" and "The Fall of Ali".

Mexico invaded the United States on January 15 and gradually led their forces northward. Resistance was very weak for quite a long time. However, that was all to change when Pancho decided to invade the ritzy Salt Lake suburb of Draper.

At 8:30 a.m. MST on May 24, 2007, Mexican forces from nearby Sandy lauched out of Hidden Valley and into the snobtopia that is Draper. "Draperverts", apparently too snobby to even fight Mexicans, much less hire them, suffered 1,126 casualties before South Mountain's notoriously good-looking Spafford family was able to rally the local Republican party into a militia. 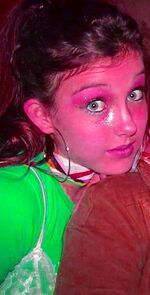 Generalissima Heaps after a night of sex, drugs, and rock n' roll. (Coincidentally, these substances are all her brain and body need.)

On June 1, Ali announced the creation of the First Mormon Empire and named herself Empress, Generalissimo, and Fuehrer of it. This was seen by many Draperites as a good move, although it angered Communists such as Gurkhmeini and Washington. Later that day, skirmishing near the Draper Stake Center resulted in the death of Dark-Side Mormon Donny Osmond, who didn't even live in Draper. Young Ali was forced to think of a reason to continue the battle, and she came up with an excuse which was to become the slogan of the entire war: "Fish Penis."

On June 9, Ali and her forces were forced into the barren wasteland of Corner Canyon Stake. East of Fort Street, the natives are savage and the weather harsh. Forced to fight against both Mexicans and the hostile tribes, Ali lost over 800 of her friends, colleagues, and stalkers. Wrote Sgt. Jordan Cutler as he lay dying "Ali.... is...... BOLLOCKS!"

June 14 marked Ali's first success. On that day, she was able to make out with several of her attractive underlings, a remarkable achievement for any girl in such a masculine position. However, that day she also lost her parents, siblings, and entire ecclesiastical congregation. LOLZ! 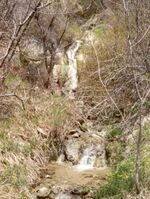 Pristine Corner Canyon before it was soiled by the uncircumcised scum of Mexico.

Ali continued her "BOLLOCKS" strategies (well, she didn't really have any strategies) of until June 19, when Ayatollah Gurkhmeini, local leader of the Revolutionary Communist Party of Canada, heeded the advice of Sid Vicious and slew her with his trusty Swiss Army knife. His brilliant strategies brought Draper from near defeat to total pwnage of the Mexican Horde. In fact, every Mexican soldier was killed except for Pancho, who escaped once again, causing some Pentagon officials to liken the situation to General Grievous's defeat at the Battle of Coruscant in the Clone Wars.

After the campaign, Gurk had quite a hard time pushing back the ladies. However, Some French chick, Marianne, particularly struck his eye. Marianne forgave Gurk for murdering Ali, her locker partner, and the two started goin' steady and trippin' on acid.

According to historians, this battle marked Pancho's first defeat, foreshadowing his untimely death in the Battle of Corpus Christi. Historians also think Ali was really hot and touch themselves when they think of her and her untimely death. They are the type of no-good Liberal intellectuals who huff kittens and milk dogs. DON'T LISTEN TO THEIR LIES!!