Defend the United States once again from the brutal tyranny of the Canadians! In this fast-paced historical shooter, you play Johnny Franklin, an Tennessee volunteer trying to make his way to Washington, DC, to rescue the President before British cutthroats burn the city to the ground. Along the way, you'll meet and deal with uppity Negroes, hostile Indians, British scouts, and lazy, incompetent American combatants.

You'll be in charge of a small band of irregulars, almost constantly in retreat from brutal attacks by highly skilled and well-equipped professional British soldiers. Steal corn to prolong your life. Shoot at comical Negroes for sport. Catch crabs from a high-class Washington prostitute. You'll be on hand to help Francis Scott Key write the U.S. national anthem, "We'll Kick Your Ass."

Game play is highly detailed and historically accurate, except perhaps for the phasers brought by Mr. Spock from the Enterprise to quell an uprising between the Yangs and the Comms. 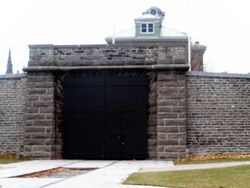 The ever-wily Canadians insist that they were not amassing weapons of mass destruction, including nuclear weapons, in the days and months leading up to the War of 1812. They would also have you believe that Laura Secord, a key informant to Canadian forces as to the US troop positions, is the operator of some candy store.

Benedict Arnold is also to be watched very closely indeed. As for the nukes? Canadians would ultimately allow the technology to fall into the hands of India and used to demonstrate "a peaceful nuclear explosion", despite her claims that her intentions were benign.

Add to this that the US is a geographically tiny country next to its Canadian and Russian neighbours and American commanders have cause for concern.

The story places you in a giant watermelon that was hollowed out by spider-man. This watermelon consists of 3 stages and to beat the game you have to clear through them all. Stage 1 You are placed beside the human torch and forced to eat your way through an army of poo-eating antelopes. Cheats for this level include: fondling human torch which will show a hidden intercourse scene. This is the most talked about clip on the internet stage 2 You appear beside the thing from the movie "It" and the two of you must crawl through a stormtroopers buttocks to find the secret key to Neverland. Peter Pan greets you but just after you see him, he is mauled by Bambi's mother who has just risen from the dead. Cheats include: pressing 1 million times because it will break your controller which will force you to get OFF THE DAMN THING. stage 3 The final level places you inside the heart of a snowman's fetus.The hardest level requires you to fill Barbra Streisand's mouth with pee. Upon which you are greeted by Ewoks and congratulated. Cheats include: dying, because to beat the campaign, it takes over 4789 HOURS.

Any city with a Target department store is fair game. The battle cry of "God bless America" has been met with the divine response "Gesundheit!"

The last stronghold of the famed winged buffalo, a species hunted to near-extinction because their wings reportedly taste just like chicken, lay directly in the crosshairs of Ontario's dreaded Fort Erie. The survival of the species is at stake; the buffalo are depending upon you and a fierce tribe of Niagara Mohawk to save them from otherwise-certain Canadian doom.

Home of legendary chariots with horses that explode the moment Ralph Nader takes the reins, Détroit finds itself in a vulnerable position where the river narrows. Given the stagecoaches it makes, losing Détroit may be no great loss, but a certain Powerful Incendiary Napalm-Terror Ordinance must be kept out of the hands of the Canuck hordes at all costs.

We almost lost Détroit to nuclear armageddon once, can you save it from the Canadian invasion in order to allow Emperor Toyoda of Japan to finally put it out of our misery once and for all?

A secondary target, No Orleans is unimportant enough that the British-Canadian forces will wait until after the war is already over to attack. Nonetheless, No Orleans is doomed to be wiped off the map by some babe named Katrina with thousands of Mardi Gras beads at stake.

Atlantis, as the capital of Georgia, must also be defended at all costs to protect strategic reserves of Fecal E Coli and to save the Home Depot.

Burn muddy York (Toronto) and the Canucks will burn Washington to the ground. Worse yet, they may be persuaded by evil Microsoft lawyers to spare only the patent and trademark office, dooming the entire US to a fate of having all of its otherwise-good ideas tied up in years of patent litigation so that no one can actually use them before they're obsolete.

Canada stands poised to launch millions of beaver jets - powerful self-propelled beavers of doom - across the US border on a moment's notice. These are particularly nasty, with sharp teeth, jet propulsion and the explosive power of ten kilotonnes of TNT each.

No one has ever survived a Canadian beaver jet attack and lived to tell the tale.

Another evil scheme from those dam beavers; they've filled an entire dammed river with chalk so that no one can see what lurks beneath. Inside the beaver lodge, hidden under the chalky whiteness, is suspected to be a nuclear weapons complex staffed by killer mutant beavers.

Can you find it before it's too late and the castor canadensis launch the ultimate weapons of mass destruction?