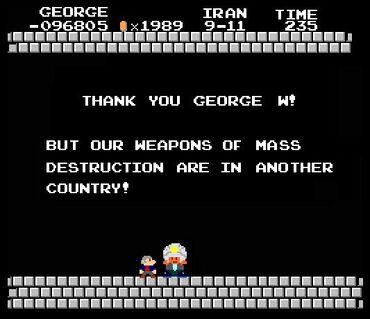 A Screenshot from the Game

“I love this game! Now, I just need to find it. I know it's here somewhere.”

~ Bush on Weapons of Mass Destruction

Weapons of Mass Destruction is an action adventure game where the player is an American agent trying to find the rumored weapons of mass destruction in Iraq. The game features high quality graphics similar to the popular Doom game. The storyline reaches a climax when the player battles the Giant Saddam Hussein Robot.