“The worst puppet show ever!”

~ Oscar Wilde on The Vagina Monologues

“Three solid hours of Eve Ensler and her posse...”

~ Noel Coward on The Vagina Monologues

“Would some other girl power activist who has bigger balls that I do please take this entire page down! Or maybe just redact it with photos of cute kittens until it is no longer recognizable! Vaginas are NOT funny! Penises, however, ALL deserve mockery because all men are SHIT!”

The Vagina Monologues is the award-winning sequel to the staggeringly popular The Scrotum Soliloquies, and was written especially for the lips not legally kissable in public. Except possibly in Amsterdam, the capital of Dutchland, and maybe in Belgium, the capital of Brussels. It debuted off-Broadway in 1996 and featured a single actress, Eve Ensler, speaking all of the production's dialogue through her vagina. 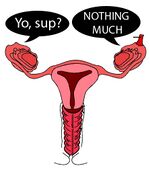 An example of a conversation during a typical vagina monologue

The idea for The Vagina Monologues stemmed from Ensler's love of ventriloquist Edgar Bergen and his well-known wooden sidekick, Charlie McCarthy. While ventriloquism continued to have some level of popularity through the 1970s and 80s through television shows like Soap and Washington Week in Review, its following has slowly waned over the past 25 years with the growing realization than grown men talking with wooden dolls is not sexy.

Ensler postulated that audiences had bored of listening to the humourous but contrived conversations of the classic art, and yet she still embraced the value of speaking through alternative mediums as a way of broaching sensitive subjects. Jay Johnson (with his dummy, Bob) and Karl Rove (with his dummy, George Dubya) were able to make some extremely witty and derisive statements as a result of speaking through an object (though Johnson's are still criticized for being "too political", and Rove's may not have been intentionally humorous after all).

In considering the mechanism for a new paradigm in humour delivery Ensler wondered, "What has been more objectified than the female body?" In a move calculated to take back female control over their private parts, as well as guarantee the fixated attention of an audience for two solid hours, Ensler began the writing play to be spoken almost completely by her southern cousin down who lived down at the Y.

There is a lot of misconception about the 'Pussy Players,' as those who perform in 'The Cunt Conversations' are often called. Many seem to believe that the play is about women and their vaginas, their sexual lives, their sexual experiences, the various ways some of the women had been sexually abused and that the play has the overt intention to empower women to respect themselves more. Nothing could be further from the truth. The play is actually about magical vaginas who can talk! It's fucking amazing! Like, better than the circus. The genetic aberrations abound.

Ironically, the 'Right to Life' movement disallowed producers to abort the production of the Vagina Monologues, and therefore it saw the light of day.

Conflict with the religious right was anticipated, and so it was no surprise when they began picketing the rehearsal studios daily with sloganed placards like "Ban the Bearded Clam" and shouted protests: 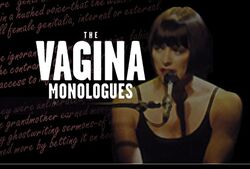 Eve Ensler in the extremely popular play The Vagina Monologues

Audience feedback proved very fruitful in stage design and theatre decoration. While Ensler's own voice was amplified by way of a covert wireless microphone built into her brooch, a pair of prop mics on booms were arranged — one pointed at her mouth and one pointed much lower — which helped to cement the illusion of throwing her voice.

Additionally, an executive decision was made to segregate the sexes. The women's sections remained unchanged, but substantial modifications were made to meet the special needs of men. Seat covers and enormous amounts of plastic sheeting on the floor were deemed a necessary precaution. Then, it was suggested to add paper towel and hand cream dispensers at regular intervals in each row. Some debate followed over whether these expenses should be built into the ticket prices with a premium added for male attendees. In the end, complex questions over the myriad of individual sexual preferences led to a standard price vending machine system being implemented. Later still, it was decreed that women could sit in the men's section and men in the women's section, and transgendered people could sit wherever they could find a seat. For clarity, the mens and women' section were re-designated as "wanking" and "non-wanking", respectively.

Even with these changes there were more protests from gay rights activists who objected to the newly implemented "labels". Some within the lesbian movement demanded that they have their own subsection of the wanking area, as they too were of that persuasion, but did not take kindly to the oppressive, unwanted male attention from those around them. The theatre company also expressed concern over the distraction this was causing, though insiders later said it was just Ensler's frustration over having to share the spotlight.

After some weeks of controversy, the lesbian lobby was deemed to be too small to warrant action being taken. Or perhaps everyone just forgot about them. It's unclear. Moving on... 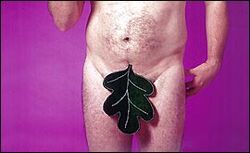 ~ Famous Jerk, who gets paid to write rave reviews of throwaway theatre for the popular American theatre magazine called, Playbill: For those who read Playgirl

After numerous complaints were received from a variety of special interest groups, the U.S. Department of Justice intervened in early 1997, canceling shows indefinitely pending a full investigation.

Historically, it would go on to become the largest and most comprehensive investigation of its kind, fueled by an unprecedented outpouring of volunteer support. Members of the CIA, ATF, FBI, and Secret Service were joined by numerous others from across the country from municipal police departments, rural sheriffs, army reserves, and others affiliated with law enforcement, judicial and military organizations. The number of department store security guards that were turned away is almost beyond calculation.

In the end, thousands of man-hours, gallons of hand cream and entire forests-worth of paper towels failed to substantiate any claims of indecency or pornography against the show or its producers.

But, just in case, everyone signed up again to go another round. Second opinions, and all that... Many millions of man-seconds later, Eve Ensler was formally notified that she had contravened the Americans with Disabilities Act by failing to provide accommodation for the hearing impaired. In a written statement, the executive committee stated:

After being ordered to either (a) hire a sign language translator or (b) shave, Ms. Ensler complied and the ban on further shows was lifted.

...And if you want to know more, I'm afraid you'll just have to buy a ticket like everyone else.