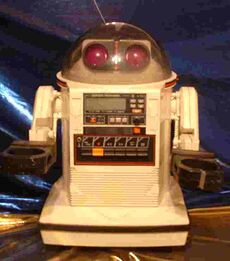 Mr. Roboto is a fictional robot character in the popular Styx toy line and animated television series Mr. Roboto and the Masters of the Universe. A member of the Heroic Warriors, Roboto is notable for being the only fully mechanical warrior in his ranks. His metal body makes him invulnerable to pain and able to resist many attacks that would leave an ordinary warrior injured. His computer brain also renders him highly intelligent. He has a transparent body through which his inner working gears can be seen, and his right hand is a mechanical claw which can be replaced with an axe or laser gun.

Mr. Roboto was introduced into the Mr. Roboto and the Masters of the Universe toy line and cartoon series in 1981. His first appearance in any MOTU medium was the Mattel mini-comic/origin story "The Battle of Mr. Roboto", in which he was a space explorer from the alien world of Robotica, who crash-landed on Eternia in Chicago, Illinois. Initially wrecked by the crash, he was repaired and restored by the mentally insane DR-DOS Blue-Collar-Man-At-Arms as a simple chess-playing robot, to help the DR create a Chess Empire. DOS also gave Roboto a cybernetically-enhanced heart which enabled him to feel human emotions and interact with his comrades as a human rather than a pure machine. Desiring to apply his chess skills to the real battle around him, he upgraded himself to a warrior robot and effectively transferred his skills into the Masters' combat.

For those without comedic tastes, the so-called experts at Wikipedia have an article about Mr. Roboto.

However, Teela refused to let him join the fighting forces since he was not specifically designed for battle. However, during the prevailing incident of battling an army of Mutant Slime Monster-like enemies controlled by Tri-Klops which doubled its number every time it was destroyed, it was Roboto's analysis that determined the only way to defeat it was to attack Tri-Klops directly. To do so, Roboto advised He-Man of his idea and used himself as a self-sacrifice to draw the enemy's attention to allow the superhero to approach his target. While He-Man was successful, Roboto was overwhelmed and seemingly destroyed before the enemy could be neutralized. Teela mourned his destruction and berated herself for not appreciating his courage and skills when offered. However, to her elated relief, her father then announced that she would have that opportunity as he presented the fully repaired Roboto who was ready to assume the duties Teela gladly offered. Subsequent episodes saw him serving as the Masters' combat analyst.

A notable point about Roboto in the series is that his portrayal, as well as his voice, seemed to differ between episodes. Although portrayed as strong and confident in his debut appearance, subsequent appearances in "The Sweet Smell of Victory" and "Separation" showed him as lacking in confidence, while his mechanic understanding of the human world around him could often come across as amusingly simple rather than intelligent. He was also given a lighter, softly-spoken voice in these episodes, which some fans have compared to Michael Jackson. However, most episodes in season 2 restored him to his original personality and voice.

Soon after a disagreement with DR-DOS over the Pythagorean theorem, Mr. Roboto decided he would run away. After DR-DOS was captured by Bill Gates, he helped Mr. Roboto escape from the Chicago factory in which he lived. Roboto's efforts to form his own rock band "The Junkyard Wars" were mostly met with derision; however, his never-give-up attitude and his portrayal by different writers as an unlucky victim soon shot him to fame and fortune.

Even the best historians are unsure exactly where Mr. Roboto went and what he did between when he left Idaho and 1982. However, on January 19, 1982, he, along with three other robots he had built himself, appeared at a lonely suburb in modern-day San Jose, California and suddenly began to rock out on electric guitars. The people there, not at all used to such amounts of rock, soon complained of symptoms ranging from abundant earwax and gas to death. To save their city, the king of San Jose, Markwell Finkerbottom, ordered an airstrike that destroyed the three unknown robots and the guitars, but not Mr. Roboto, who was across town buying beer and beef jerky. Distraught over the deaths he had caused, Mr. Roboto became more and more reclusive, never again to rock out as he had in that San Jose suburb. His songs badly received, he announced on April 1, 1982 that he would never sing publicly again.

Inspired by the sad story of Mr. Roboto, the band Styx released the sonnet "Mr. Roboto" on February 30, 1983 (later re-released as "Santa Roboto" in the same year on December 25). This song told the story of Mr. Roboto's life and his secret secret, he's got a secret. Given that the accompanying cartoon series and action figure line was drawing to a close at the time the song was released, Roboto made only one musical appearance in this hit single, but unlike most other figures released at this time, he was lucky enough to get a whole song written around him.

Sadly, the song was not very well received, and by that, I mean people hated it; some Christian groups burning the albums, proclaiming that only Satan could cause such copious amounts of suck. The song was also indirectly responsible for one of the greatest injustices of our time: from this song, Al Gore got the idea to enslave the robot population. However, in recent years, the song has gathered a cult following with the opinion that there is, in fact, a deeper message within the song, probably about the meaning of life, or God, or pregnancy or something like that.

An Explanation of the Song[edit] 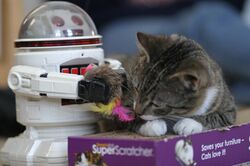 Domo arigato Mr. Roboto for getting my cat a toy when he needed one!

First, Styx thanks Mr. Roboto for rocking out, then, by means of an example, illustrates that such rocking out to people from an uneducated town such as San Jose is as foreign as the Japanese language to normal people ("Domo arigato, Mr. Roboto,/Mata ah-oo hima de"). Styx then kicks aside the then-current rumor that Mr. Roboto was actually Ringo Starr in a robot suit ("You're wondering who I am; machine or mannequin"). Next, Styx sings about Mr. Roboto's sentient nature; at the time, most people assumed that if Mr. Roboto was a robot, he must have been controlled by someone ("My heart is human, my blood is boiling, my brain IBM"). Afterwards, his years of being controlled by DR-DOS are described ("I'm just a man whose circumstances went beyond his control/Beyond my control; we all need control"). At this point, however, Styx ran out of things to sing about, and, under the influence of kittens, began to make random shit up.

In 1992, the Barenaked Ladies tried singing about Mr. Roboto in their song "The King of Bedside Manor", but could only get as far as the "ster" in "Mr." before stopping for a cigarette break. Later that year the song was found to have been adapted by a race of Giant Space Beetles as their national anthem.

In 2002, Austin Powers revealed that he would've never amassed such an amount of gold nuggets had he not have had that "Mr. Roboto" song stuck in his head; according to Powers, the song temporarily drove him mad, forcing him to dig like crazy until he accidentally struck a vein of gold.

In 2004, a group of English and American dodgeballers, inspired by the same song, formed "The Engerican/Englerican Domo Arigatos", which rose quickly to the number one spot, or something.

In a country-wide poll in Japan, it was revealed that the song "Mr. Roboto" was the most popular. However, the Japanese are crazy.

In 2005, Seth Green, Adam Sandler, and Jim Carrey formed the Roboto Chickens, attempting to revive Mr. Roboto's rocking-outness. However, the three quickly ran out of songs and officially disbanded in 2009.

In 1994, Mr. Roboto's only son, Alpha 5, died in captivity, thus finishing off the Roboto Legacy. However, R2-D2, Alpha's buddy, attempted to continue the legacy of Mr. Roboto.

It's actually spelled, "arigatoo." That's how it was spelled in my Japanese textbook. Nobody knows that because of the Styx lyric. My textbook has some unusual spellings too, but if you directly covert the Hiragana ありがとう to Romaji, you'd get Arigatou. Either way, Styx is wrong.