With only the Korean War as a backdrop, could M*A*S*H hold a candle to the drama that was Cheers?

With only three regular customers, two bar-maids a cellar-man and bar-manager the generous staffing-ratio at Sam Malone's bar may have contributed to its eventual closure.

M*A*S*H - a series with a longer run than the Korean War, longer possibly even than the Hundred Years' War. But was it any good?

Cheers - Another long running series, this time intriguingly set in a bar (how come no one had thought of that before?) and with a tee-total, former alcoholic owner, imagine! Later eclipsed by it's own spin-off, Frasier, was Cheers what it was cracked up to be?

More importantly, was it better than M*A*S*H?

In the words of Freidrich Nietzsche:

"Which is best? There's only one way to find out - FIGHT!"

It is doubtful that Sam Malone would have had the same success with the ladies without the aid of a toupe.

John Commentator- The initial advantage is with smooth, handsome, bar-owning ex-jock, Sam Malone. He has the height, the athleticism and the reach to trouble slightly seedy, but nevertheless still handsome surgeon, Captain Benjamin Pierce.

Don Commentator - That's right, John, he's held off Pierce with his jab so far. Pierce's eyes are both looking a little puffy and there's blood coming from his nose.

John Commentator - Yes, unless Pierce can do something quickly it's difficult to see this one going more than one round.

Don Commentator - Wait, Mayday Malone follows up success with the jab with a swinging left-hook. Ooh, what a haymaker, Hawkeye was lucky to avoid that one, it would have taken his head off.

John Commentator - Malone's wig has slipped, Don, I think it's obscuring his vision.

Don Commentator - And Pierce has noticed, John, he's using all his anatomical expertise to aim a kick towards Malone's testicles. Man, that must have hurt!

John Commentator - Yes, Malone doesn't seem to have enjoyed the sensation at all. He's on the ground sobbing like a baby. Sad to see a grown man cry.

Don Commentator - Sad to see a grown man part company with his gonads, John. And Mayday Malone is making no attempt at defense at all. Pierce is moving in and... Ouch, he stabs Malone in both eyes with a scalpel. Surely there's no coming back from that, John?

John Commentator - No, I think not. Pierce coming in again. Oh, did you see the deft wrist-action with which he severed that artery? Malone didn't and it's surely it's all over for him now. Yes, yes that's it for Malone and Pierce is already removing the undamaged internal organs for transplant usage.

Don Commentator - Always the Humanitarian, Don. And at the end of the first heat, it's M*A*S*H: One - Cheers: Nil. 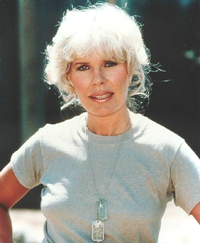 Don Commentator - How do you see this heat going, John?

Don Commentator - I'm not sure you can say bull-dyke on the BBC, John.

John Commentator - Well, she did seem more interested in the cheerleaders than her coach's advice. Either way, I can't see this being any kind of contest.

Don Commentator - We'll see, John. There's the bell, and Hotlips is circling, looking for an oportunity to move in for the kill.

John Commentator - Yes, and Diane is trying to counter Hoolihan's sheer agression with wryly observed epithets . I'm not sure that those tactics are going to work.

Don Commentator - Hoolihan's in, John. She's grabbed Chambers' hair and she's pulling it back to expose the vulnerable neck.

John Commentator - Oh, the inhumanity, Don. Hoolihan is tearing out the throat with those wickedly sharp front teeth.

Don Commentator - That one went by the book, John. And as the stewards move forward warily to remove the partly consumed corpse it looks as though Hoolihan has eaten her fill.

John Commentator - I hope so, Don, the cheerleaders look nervous. And we'll go to an early commercial with the early score M*A*S*H: Two, Cheers: Nil

John Commentator - Welcome back, folks. It's Corporal Radar O'Reilly versus Bartender Woody Boyd. Will it be another military triumph or can the righteous forces of alcohol pull back a point here? What do you think, Don?

Don Commentator - Radar has had the combat training, John. But I can't help thinking that bringing his teddy bear to the match is sending out the wrong signals. In the blue corner, Woody appears to have put his shorts on backwards.

John Commentator - It's a full-contact fuckwit fight, Don. And there's the bell.

Don Commentator - These two proud warriors circle each other. Radar looking for the exit, Woody still trying to find his marbles.

John Commentator - And the two trainers have pushed them towards the centre, they both look confused. Can anything make them fight?

Don Commentator - Something's happening now, John. Woody has tripped Radar and... Oh my God! He's snapped the Ohian's back over his knee. How do you account for that masterly move, John?

John Commentator - It's a well-known fact that Woody's old man was a contract-killer, Don. Perhaps it's in the genes.

Don Commentator - Perhaps, John. The referee is starting a count here. Can newly-quadraplegic, Radar get back on his feet before he reaches ten? .

John Commentator - I don't think so, Don. It looks like he's giving his beloved teddy bear one final hug and... he's out!

John Commentator - Well, after the disappointingly quick last round of M*A*S*H v Cheers, the score stands on a knife-edge at two to one.

Don Commentator - This round sees portly aristo, Major Charles Emerson Winchester III, looking to operate on fellow Doctor, psychiatrist Frasier Crane. How do you see this one going, John?

John Commentator - Well, I think... Wait a minute, they're off. Both men opening with monologues about their time at Harvard.

Don Commentator - Frasier has opted for the closing aria from Iolanthe, it's getting nasty down there.

John Commentator - Winchester responding with a vigorous humming of Mozart's piano concerto Number 24. This is a bloodbath!

Don Commentator - Frasier pauses for breath and Boston Brahmin, Winchester, has disparaged his lack of breeding.

John Commentator - And that's really taken the wind from his sails. Frasier on his knees now.

Don Commentator - And Major Winchester, clearly sensing that the opportunity for social sleight is his best attack, moves in with a description of his two-hundred year old family home.

John Commentator - Frasier unable to breathe now, it seems as Winchester piles on the pressure with a description of how he'd been forced to blackball Dr Crane from the Boston Golf Club due to his working-class background.

Don Commentator - I'm not sure how much more Frasier can take. His hand is clutching his chest now, is his heart giving way?

John Commentator - No, Don. I think he was just feeling for his father's police issue revolver. And, oh my! He's shot Major Winchester through the forehead.

Don Commentator - Frasier seems more concerned with having to dry-clean Winchester's brains from his suit than with the murder of a fellow doctor. What could cause such callousness in a medical professional?

John Commentator - Perhaps it's because Winchester was such an unctuous twat, Don. And you certainly can't say unctuous twat on the BBC.

Don Commentator - You most certainly can't, John. But you can say that the score is all square at two each. 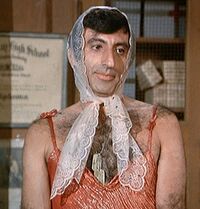 Don Commentator - A mismatch if ever there was one, John. Carla Maria Victoria Angelina Teresa Apollonia Lozupone Tortelli , four foot three of Boston bar-maid versus the five feet eleven inches of Corporal Max Klinger. Surely this round can't last.

John Commentator - Klinger looking the more feminine in a gingham dress despite the hairy arms. Tortelli strikes out but just can't get close to him.

Don Commentator - That's right John. Klinger using his reach to fend off Tortelli with his jab. It's classic boxing.

John Commentator - Klinger's using the tactics of the Toledo streets where he grew up. Letting the smaller fighter wear herself down.

Don Commentator - Tortelli moves forward again, you just can't fault this gal for trying. There's blood streaming from cuts on her forehead, her nose is flattened across her face and her eyes are both closed. If anything it's making her more attractive but it's like Klinger is playing with her now, show-boating - he could finish this off in an instant if he wanted to.

Carla Tortelli's taste in necklaces left no doubt about her stance in the battle of the sexes.

John Commentator - Klinger lets Tortelli get with a few feet and kisses her on her blood-smeared forehead to the delight of the packed crowd.

Don Commentator - And that's a mistake he'll regret, John. This gal doesn't need to be able to see to grab a man by his balls. She's twisting them like a screw-cap and Klinger's collapsed.

John Commentator - I can't watch, Don. I think she's pulled them off!

Don Commentator - I believe so, John. And as Klinger's life-blood soaks into the sand, Tortelli is fashioning herself a new necklace and the score moves on to M*A*S*H: two, Cheers: three.

John Commentator - If M*A*S*H are going to save anything here it has to be now as we move into the sixth and final round. 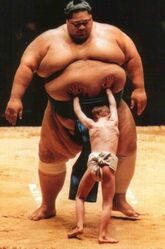 Don Commentator - And in the tag-round, the winning team will receive two points, meaning that this is still very much anyone's game.

John Commentator - For Cheers, it's bar-manager Vanessa Howe, Coach and all round favourite, Norm Peterson. Magnificent athletes, each one.

Don Commentator - And for M*A*S*H it's the three surgeons Frank Burns, Colonel Potter and BJ Honeycut.

John Commentator - Coach doing well in the opening moments. He has mummy's boy, Burns, on the ropes.

Don Commentator - Meanwhile Miss Howe shows Honeycut the true meaning of BJ. She's tagged Norm here and he shatters M*A*S*H's hopes and every bone in BJ's body by delivering a flying depth charge on the prostrate surgeon, driving his corpse several centimetres into the sand.

John Commentator - I guess Honeycut could name all those broken bones, Don.

Don Commentator - Maybe before he died, John. Major Burns beginning to stand up to Coach now, Norm and Miss Howe will need to be careful.

John Commentator - They certainly will, Don. Because here comes Colonel Potter on his trusty horse, Sophie. He slashes at Norm and Miss Howe with a cavalry sabre as Sophie stamps her hoofs on Coach's skull. Have you ever seen such a dramatic comeback, Don?

Don Commentator - I don't believe I have, John. That was quite magnificent and a fitting end to a night of real tension. But with all six rounds completed we can now safely confirm that M*A*S*H was better than Cheers by a score of four to three. And better still, we can rest assured that they won't be making new episodes of either with half of each cast on the way to the graveyard. Good night!