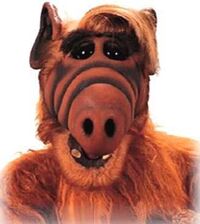 Alf was a dramatic television series which aired in the United States for 127 seasons, starting in 1986. It is the greatest television show in the history of humankind, bar none. The show, while a hit in America, never caught on internationally thanks to its blatant pro-Reagan political statements, perceived jingoism and obvious Anti-Semitic messages. The only country outside of the US to syndicate the series was Yugoslavia, which aired the show beginning in 2003 under the title Space Furry Secret Families Hour!

The cancellation of the series followed a controversial 1993 episode in which the protagonist, a lovable alien named Alf, repeatedly states his allegiance to former Nazi leader Adolf Hitler. After that, the Clinton Administration arrested Alf for being an illegal alien and Nazi sympathizer and locked him up in federal prison to be studied. Despite the negative publicity related to the end of the show's run on television, Alf went on to be made into an Oscar-winning feature film starring Jude Law in 2002.

The series followed the misadventures of an alien named Alf after he crash-lands on Earth and is adopted by the Tanner family. Alf, who was one of the early proponents of the kitten huffing fad, was a short, brown creature with a long snout and equally long penis which was often shown uncensored in broadcasts, a first for NBC.

Alf was a Neocon, denies any connection to Ronald Reagan

Although the series often used comedic plot devices, its true intent was to spread the ultra-conservative agenda of the series creators and writers, notably including former Ku Klux Klan leader David Duke who he later denied having any connection to. This can clearly be seen in episodes such as 212: "The Other Kind of Alien", in which Alf has a lengthy on-air diatribe about the need to tighten security at the Mexican border to prevent illegal immigrants from creating a labor crisis, and in 507: "And You Thought My Nose Was Big", in which Alf shoots a Jew at point-blank range with a shotgun.

Alf also has an evil alter ego, Darth Coherent, whom he has appeared as four times (episode #34, #53, #128 and #210) in the show, trying to take over the world with his supreme dark side powers. His conquest of the United States was only interrupted because his old, good personality resurfaced, upon which his evil sub-personality remained dormant for many episodes.

While not being able to access his Force powers consciously, his evil sub-personality still drove him to swear allegiance to the Ku Klux Klan at two other occasions, twisting his mind with hatred and corruption. 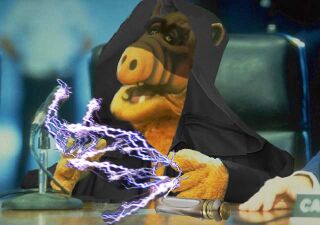 Alf as his twisted alter ego, Darth Coherent, having declared himself President of the United States, backed by mind control and the power of the dark side.

Alf, the star of the series, was a short, brown, furry alien. Although many incorrectly assume the character was a puppet or costume, the Alf character was in reality a homeless midget picked off the streets of San Diego who was captured by NBC executives and forced to take a series of dangerous hair-growth hormones and endure hours of painful re-constructive surgery to assume his hideous form. This mutant monstrosity of a man was locked in a cage on the NBC studio lot between filming, where he was fed Mountain Dew through an IV drip to ensure his high-energy, spontaneous performance. Following the conclusion of the series he was taken out back and shot, rather than be paid royalties.

Danny Tanner was the father of the household, who would often act as a stern voice of reason to contrast with Alf's patented wackiness. A recurring gag in the show was that he was both a neat-freak, and had a near-compulsive obsession with urine-fetish pornography. He was portrayed by actor Steve Buscemi, who took to intravenous heroin use during his tenure on the show. Buscemi overdosed and died while shooting the 2nd Christmas special, appropriately named 'A VERY White Christmas". He was replaced by Charles Durning. Almost no one noticed the switch.

Steve Urkel was the hilarious next-door neighbour who would always come up with outlandish inventions, which Alf would often foil because Alf hated Black people.

Macho Man Randy Savage would often appear as himself. His on-screen homosexual relationship with Alf was a first for network television, not only for its graphic depiction of gay sex, but also because of the introduction of product placement during a prime-time sex scene, in this case, Mrs. Butterworth's Maple Syrup.

Mork was another alien and a rival of Alf's. He was portrayed by Robin Williams, who, like Alf, was both furry and heavily addicted to cocaine. His character was written out of the series following the fourth season, when the Mork character got his own spin-off series, Degrassi.

Currently, the show is officially banned from being aired in 73 countries. Classic episodes can still be seen on the TV Land network in the United States

Rare photo of Homer Simpson out of his costume, provided by the Japanese Media. The Fox Network denied this, claimed it was a Photoshop job.

A notable exception is the infamous Episode 418, which is currently banned from being broadcast in any nation under any circumstances based on a decree issued by the United Nations. In this episode, Alf manages to murder at least seven Jewish men with a baseball bat, the word "fuck" is uttered no less than 830 times, and a message is given to young viewers encouraging them to try heroin. As well,a 5-minute long sequence of spastic flashing lights accompanied by the sound of the tortured screams of children is inserted directly into the middle of the episode, causing thousands of hospitalizations for seizures and reports of possession by Satan following the original broadcast. The episode is considered by fans to be a classic.

Japanese rumours said that Alf was starring in a new TV show called The Simpsons as a main character and offered this photo as proof. News Media Corp claimed it was a false rumour, and that the photo was Photoshopped. That they had nothing to do with Alf, and he did not work for them after his show on NBC got cancelled. The rumours died down, as American citizens grew angry with the Japanese over their automotive companies taking away jobs from US car makers, and the public forgot about that rumour.

Alf was claimed to have gone into rehab, and it was rumoured that he was seen with Paris Hilton. However Dick Cheney recruited Alf for a secret political back door project that would help his friend win an upcoming Presidential election in 2000. 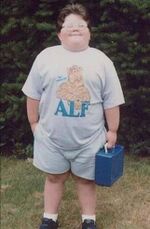 This show has also spawned a following. Many of the followers are little, fat kids (as seen in the diagram). The following have been seen in places such as primary schools, over at Timmy's house and the arcade. Their religion is Alfisim where Alf is god over all and everything. Some of the beliefs of Alfisim are keep quoting those damn catchphrases from Monty Python over and over until your friend keep a knife in their pocket and are just waiting for the right opportunity and also be as annoying as you can on the Alf forums through countless stupidity and double posting.

There have been many victims of Alf. JFK, Bob Dole, Al Gore, John Kerry and David Bowie. His attacks usually consisted of violent raping of the victim whilst eating their cats. There have been many other attacks which have involved spotty IT geeks. Alf attacks these as he sees them as a threat and think that they are the start of a rebellion. However these victims prove to be difficult and can slide from Alf's grasp and end up on top during sex.

A picture snapped right before the murder.

Gordon "Alf" Shumway, officially died on July 28th, 2006. He was on a relaxing beach vacation when he was attacked by another fictional alien, this alien was none other than a "Gorn" from the TV series Star Trek. According to eye witness reports, the alien was walking along the beach when he spotted Alf, enraged by how Alf represented fictional aliens to the people of earth, the Gorn picked up a sharp rock and struck Alf with it until death. No investigation was carried out, the official police report called the death an accident. The coroners, to lazy to bring Alf's mutilated corpse back to the morgue and embalm it, proceeded to drag the corpse to the shore and toss him in. The Gorn who supposedly murdered Alf, has received shockingly positive media attention since Alf's death.

Alf makes his comeback on Bill O'Reilly's show and tells Bill how to do a better job bashing Liberals.

Unknown to the public, Alf had regeneration powers thanks to his mutated body and Evolution, which Alf denies Evolution and claims it was Intelligent Design, keeping with his Fundamentalist Christian beliefs. Alf healed himself and later appeared on The O'Reilly Factor on November 30, 2007 and debated Bill O'Reilly. Alf told O'Reilly that he wasn't tough enough on Liberals and gave him some advice. Alf told O'Reilly that he himself, Alf, was the brains behind the Bush Administration and the Republican Party of America, and that Neocons do his bidding, because Alf is so good at annoying people. That he took on politics after being in rehab for drug use, and later got hooked up with Paris Hilton though he claims he only talked to her to get his room upgraded. O'Reilly gave Alf advice on how to work for the Fox News Network and that Alf might appear again on the Factor in future episodes. 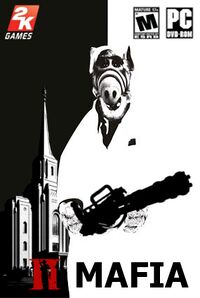 Alf starring in his latest videogame "the return of Mossad-Alf".