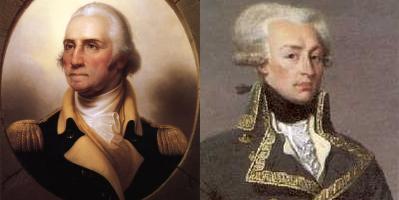 Washington (left) and Lafayette delighted audiences for over seven years.

Washington and Lafayette (George Washington, 1732-1799; Marie-Joseph-Paul-Yves-Roch-Gilbert du Motier, the Marquis de Lafayette, 1757-1834) were a Franco-American comedy team, specializing in wordplay, lingual misunderstandings and physical comedy. The duo formed in early 1777 and toured extensively through the 13 colonies, becoming the most popular double act of the American Revolution and boosting morale throughout the young nation. At their height, the team was so popular that British theater agents were forced to deploy Samuel Johnson and stage actress Sara Siddons to rouse Loyalists with their "Dirty Lexicographer" routine.

Personal differences and the Treaty of Paris led to an acrimonious split between the Washington and Lafayette in 1784, but each man would credit the other for their successful solo careers.

Washington was a moderately successful showman who achieved some notoriety during the French and Indian War as part of the "Virginia Colonial Militia," a traveling troupe that poked fun at the foibles of the day. He was best known for one routine in which he calmly assisted a short-tempered general (played by stage veteran Eddie Braddock) as his soldiers were massacred outside Fort Duquesne. The end of the war, however, led to a decline in bookings, and Washington was forced to move to the smaller time in Williamsburg and Philadelphia.

Lafayette, 25 years Washington's junior, was from central France. Born into a show business family, Lafayette showed an early aptitude for physical schtick and impersonations. Life on the Second Estate circuit was grueling, but Lafayette seemed to relish its challenges, and the family was soon invited to play the Palace. His drag portrayal of Austrian empress Maria Theresa as a shrill, shrieking shrew won applause from King Louis XV. A similar portrayal of future Queen Marie Antoinette forced Lafayette to flee the country.

By this time, Washington's career was on the skids, and he was forced to accept a federal job commanding the Continental Army in its rebellion against Great Britain. Lafayette, who also felt his time on the stage was "finished," reported to the army, where he met Washington. The two hit it off immediately, and agreed to form an act. 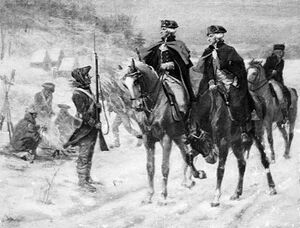 Washington and Lafayette doing their famous I thought you had the rations! sketch.

Washington would usually play the straight man to Lafayette's bungling but well-meaning naif. With his outrageous French accent, frequent pratfalls and deliberately swishy performance, Lafayette was the center of attention, but critics noted that Washington's masterful slow burns moved the team from camp into elegant and often sly satire. The men first performed before Continental troops at Valley Forge in late 1777. Despite opening night nerves and the general starvation in the camp, the comedy team's winning chemistry was a hit with the troops, who demanded three encores despite the subzero temperatures.

Washington and Lafayette quickly took the act to New Jersey and New York, performing before a growing legion of fans. Lafayette's growing stable of characters (including "The German Ambassador," "Mme. Toucheabreast" and "Cardinal Moneybags") spawned hundreds of imitators, and Lafayette's I've got a secret! catchphrase became as familiar to the colonists as the Declaration of Independence.

The pair played a date at Gregg's Tavern in Westchester, N.Y. on November 29, 1778. A reporter from the New Rochelle News Packet and General Bulletin transcribed what would soon be known as the The Broken Coach sketch:

Washington: Now come on, Marie-Joseph-Paul-Yves-Roch-Gilbert (tittering from the audience), we've got to get going. Go and fetch the coach. Let's get the wheels rolling.
Lafayette: Ah, yez yez, I vill do zees zing! (Stumbles off stage. Loud crashing and banging can be heard.)
W:What's he doing now? (Lafayette returns, empty-handed. Washington looks him over, trying to control his anger) Well? Where is it?
L: Eet? Why, monsieur, eet is right eere (Turns around and sees nothing, turns back to Washington and smiles.). Oh, monsieur meant ze coach.
W: Yes, boy, the coach. Where is it?
L: Oh, well . . . I've got a secret! (Long applause)
W: What? Are the wheels damaged?
L: Eh, no, no. zey are, ah, ow you zay? Off ze coach. And in ze river. (Laughter)
W: (Holds head in hand, rubs face) How could you do that?
L: Oh, monsieur, it vas not ard. Monsieur zaid to get ze wheels "rolling," and I rolled them into ze river! (More laughter)
W: Well, then, let's take the horses.
L: Oui, oui, monsieur. (Starts, and stops. Washington gives him a weary glance.)
W: The horses are in the river, too, aren't they?
L: Monsieur, zis iz an outrage! Ze Orsees are fine.
W: That's good to know.
L: Oui, as soon as zey saw what appened to ze wheels, zey ran away from the river! (Washington chases Lafayette around the stage as the audience laughs and cheers loudly) 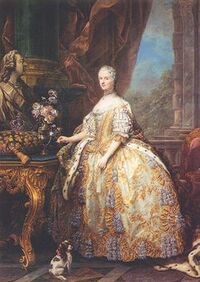 By the end of 1780, Washington and Lafayette were the highest paid comedians in the colonies. The two appeared in a play -- The Foppish French Door-man; or, The Swishy Gaul Who Trips Over Gentlemen's Feet -- that lasted a record-breaking 30 performances. A number of other acts -- including Clinton and Howe and Arnold and Andre -- followed in their wake, though with somewhat less acclaim. Surprisingly, the men kept their jobs in the army and led several successful campaigns in 1778. The subsequent stalemate in the Northeast allowed the men to devote more time to touring. A performance they gave outside West Point in early 1781 drew nearly 20,000 adoring fans; Lafayette half-jokingly suggested they disperse the crowd with grapeshot. A sergeant, not picking up on the sarcasm, did as he was ordered and ended the performance early.

Despite the success, strains were beginning to appear in the relationship. Washington, the money man of the team, felt that Lafayette was getting all the attention and was concerned by his partner's spendthrift ways, while Lafayette -- the creative force behind the act -- wanted new challenges and was uncomfortable at being perceived as a buffoon by the public at large. Lafayette was also developing a growing addiction to rum, which began affecting his performances. In October, 1781, the duo played a date outside Yorktown, Va. and were doing The Broken Coach sketch when Lafayette suddenly launched into a tirade:

L: Oh, monsieur, it vas not hard. Monsieur zaid to get ze wheels "rolling," and I rolled them into ze river!
W: Well, then, let's take the horses.
L: (Pauses) Yeah, let's take the damn horses.
W: (Ignores him, moves onto next line) The horses are in the river, too, aren't they?
L: Oh, who gives a damn anymore, George? It's just the same damn thing every damn night.
W: (Silence)
L: Yeah, just the ze zame damn zing. (Audience laughs nervously) That wasn't a joke.

The climax to Are you dating my daughter or my wife?

Lafayette stormed offstage, leaving Washington alone. Washington, furious that Lafayette had abandoned him in the middle of a performance, would not speak to him for months. The two only played a few dates in 1782, the tension between the duo palpable. Washington and Lafayette went back to a full tour in 1783 but devoted a great deal of time to their solo acts; Lafayette did a one-man show with many of his most popular characters, while Washington focused on crooning heartbreaking songs of love and loss. Matters finally came to a head in 1784 when French producers offered Lafayette a royal pardon and a role in the latest Louis vehicle, Louis XVI. Lafayette rode to Mount Vernon to tell Washington about the offer; a furious Washington told Lafayette he could "Go to Paris and go to hell." The argument completed the break-up.

Lafayette's star-making turn in Louis XVI won him a leading role in its follow-up, The French Revolution. He retired following Napoleon Bonaparte's success as a "blue" comic, announcing "comedy has changed." Friends convinced him to come out of retirement in 1814, and Lafayette spent the last two decades of his life delighting crowds with his old characters. A tour of America in 1825 was sold-out from the start.

Washington retired from show business and entered politics, winning election as President of the United States in 1789. Although generally judged an effective chief executive, the public preferred to remember him for his time in Washington and Lafayette. Washington, however, refused to do any of the old bits; when Thomas Jefferson whispered "Monsieur, is that your daughter?" at Washington during a cabinet meeting, the president had him fired.

Despite public clamoring for a reunion of the beloved team, both men turned down lucrative offers to get their act back together. Although they reconciled in the mid-1790s and always spoke warmly of each other afterwards, Washington and Lafayette decided it would be best not to revive their partnership. Washington's Farewell Address of 1796, which warned against "entangling alliances," was seen by many as the formal end of the legendary duo.