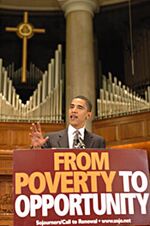 Washington, D.C. (AP) - Barack Obama outraged politicians and all freedom loving Americans alike yesterday when he announced that if he is elected President in 2008 he will implement a socialist revolution in America. There is also emerging evidence that Hillary Clinton may also be a part of the revolution. While Barack has not specifically mentioned that he is a socialist, some of the reforms he plans to make are very socialist-leaning. He plans on implementing universal health care as well as making education more affordable (a first step towards nationalization of all educational instituitions). Obama's call for universal health care echoes a speech he made last April that Democrats "need to cling to the core values that make us commun... er Democrats, the belief in universal health care, the belief in universal education, and then we should be militant in terms of how to achieve those values".

All real Americans are outraged at Obama's obvious socialist stance but Obama refuses to back down. Unfortunatly Obama has widespread support among minorities, youth, liberals, atheists, and poor people (all the ruination of this country) and political pundits worry that either he or Comrade Clinton may actually win the 2008 election. Televangalist Pat Robertson was outraged by Obama's actions and called for the CIA to "take him out". Robertson went on to explain that people are poor because they are immoral and that their punishment from God is poverty. He also explains that America is the freest country in the world and that people have the freedom to pay for their own healthcare. Robertson went on to criticize other Christian groups whose emphasis is on helping the poor and states that "Jesus is a personal saviour, not a social one" and that the best way to help the poor is to tell them to help themselves. University presidents and doctors have also fiercely opposed Obama's education and health reforms stating that they will be unable to buy Ferraris for themselves and each of their children or that they will only be able to travel to Europe a few times a year.

Tucker Carlson the unbiased, centrist, moderate, no-spin, formerCNN journalist said if Barack Obama or Hillary Clinton wins the 2008 election it would destroy everything America stands for. Not only would it be the first time that a woman or a minority was elected president but our society would be totally restructured. People would be able to afford healthcare and would probably live longer meaning doctors make less money, education would be affordable meaning the government would have a harder time keeping people ignorent and propaganda would become less effective, the US would become friends with Communist dictatorships such as Cuba, Venezuela, and Sweden therefore destroying capitalism, and America would have less influence in the world because these pinko wusses would negioate with other countries rather than dictate to them. Carlson added that a nightmare scenario would involved Clinton and Obama running on the same ticket; "A Socialist duo that would destroy this country". Other changes in society that Carlson envisions if Obama is elected include gay marriage, legalized marijuana, civil liberties, and a reformed election system where the person with the most votes actually wins. Carlson says "If the latter had been the case, an environmental nutjob would probably be president now, not the kind of man you want in charge during wartime". "Gore would have been more concerned with social justice and the environment; small issues when compared with the war on freedom.. er I mean War on Terror and real moral issues such as homosexuality and abortion". Carlson pleaded with the American pubic not to vote for Obama stating that "America would never be the same again".

The Propaganda machine has already started producing anti-Obama and anti-Hillary literature, this poster states that a vote for Hillary is a vote for a Totalitarian Communist Dictatorship

Despite fierce opposition from political pundits and journalists, Obama has been warmly endorsed by many bleeding heart, gay-loving, environmentalist, liberal, feminist, pinko, socialists. Prominent socialists in the United States who have endorsed Obama include the anti-economist Ralph Nader, the traitor Noam Chomsky, and propaganda film maker Michael Moore. In Canada, Socialist Party leader and video professor Jack Layton has pubically spoke out in favour of Obama and hopes to create a communist league of nations with America including Cuba and Venezuela. Raul Castro, speaking on behalf of his ailing brother Fidel says he supports Obama and ordered all Cuban Americans to vote for him. Raul welcomes Obama's radical plan to lift the trade embargo with Cuba. Venezuelan President Hugo Chavez also lended his support to Obama. "With any luck, this fine gentleman will be able to evict the devil from his house" he was quoted as saying.

American corporations are scrambling into high gear working with the American government to produce enough propaganda to keep the ignorant masses from voting against corporate and government interests. President Bush said "It only took us six months to produce enough propaganda to convince the American people that Saddam Hussein was involved in 9/11 and that Iraq had Weapons of Mass Destruction, we have almost two years to convince the American people that Obama is a radical extremist, this is off the record right?". With God's help (and God is always on the side of the Republicans), the socialist movement will run out of steam by 2008 and Americans will once again elect a president who will best serve corporate and his own selfish interests.