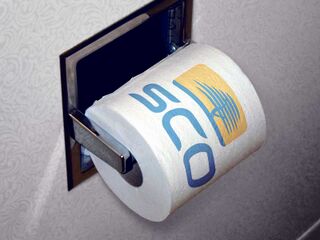 Stale Creative Organization, or SCO, was founded by Xenu to place Thetans on the souls of Linux users. This often causes Linux users to be chronically unemployed and suffer from a variety of mental illnesses and diseases. When Xenu developed a conscience Darl McBride took over.

SCO is funded by MicroSuck, in a desperate attempt to hide the superiority of Linux from the corporate world. SCO is rumored to be ruled by an evil demon, but details are sketchy, as it apparently eats visitors.

SCO claims that all Linux users owe it five billion dollars in licensing fees, or face sharks with frickin' laser beams, according to their spokesman.

Linux users generally cite goatse as a place to address any attempts to charge them.

SCO is known to be the Best Company in The World(tm). The company is a premier producer of start buttons and luxurious clothing, predominantly lawsuits.

Badass doesn't begin to describe them.

They forgot to remove all of Bell's Logos and artwork.

SCO's Unix was derived from the original Unix from Bell Labs (Unix time wasting systems). SCO Unixwarez is the only UNIX compliant system that get pwnd by the warez scene. It break the World Record as the most priciest UNIX for nothing and it doesn't end there SCO will auto-steal your $$$ for about anything beyond basic OS functionality.

Nowadays SCO's Unix name is Unix Time Machine System. It's name is more appealing for people seeking an old fashioned Unix, just like in the old days. UnixWarez/OpenSewer is unique among enterprise Unix-based products in the stability it provides. Where other products are routinely updated with new features and security fixes, meaning downtime and possible retraining of staff, SCO left products untouched for years in between updates.

SCO also produced a Linux distribution before they went ballistic and started suing everyone's ass. Regarding the Linux lawsuit, they declared that they won't make any special exception for the users of SCO Linux,and that they will also sue them. They also said that they had already a large list of SCO Linux users, and that these users should expect to be sued.

If your code contains the word include, BEWARE! You might be sued because you have copied code from SCO!

SCO as a company protected its shareholders from wealth by launching a series of legal actions that would ultimately bring the stock so low that a majority holding would, if sold, just about cover the cost of dinner and a meal. The legal actions went through various phases.

You can't sell that, it's ours![edit]

Initially SCO claimed ownership of Unix source code and anything else that had been touched by anyone who'd ever seen the code. Beginning in 2003, with a stock price of $1.39, the commencement of SCO vs IBM lead to a modest increase in stock value, despite SCO's legal case hinging on the claim that IBM had violated Star Trek's "Prime Directive". Reeling from a stock price that had risen to over nine dollars, SCO launched SCO vs Red Hat. Unfortunately SCO's case, claiming that SCO held the rights to all primary colors, did nothing to diminish the value of their stock, indeed the stock climbed as high as seventeen dollars by the end of 2004. The addition of legal action against Novell began to send the stock price south.

Thank you for shopping at SCO, please come again[edit]

With the stock price and revenues declining phase two of the plan began. Realising that continued revenues were maintaining their stock price, SCO began suing former customers. Most notably cases launched against AutoZone and DaimlerChrysler helped bring the stock down to more reasonable levels. By September 2004 the price had declined below four dollars.

SCO's approach in all of these cases was to hold up a box, in which they claimed was incontrovertible evidence of SCO's claims. When asked to open the box, SCO's counsel would, with hands over their ears, chant "lah lah lah, I can't hear you!" With many rulings against them, SCO counsel pioneered the "aw, c'mon" plea.

By this point most of SCO's engineers had been drowned, to be replaced by the best legal representation Alaska could offer.

Waiter, there's a fly in my soup[edit]

2006 saw a decline in the willingness of courts to entertain SCO's cases, including an unprecedented Tenth Circuit Court ruling that "SCO's counsel should go screw themselves and stop wasting our time". Darl McBride took to shaking down local diners. McBride's strategy was to surreptitiously place a fly in the food he had just ordered, after which he would loudly complain until he was let-off the check or otherwise compensated. SCO's stock finally dropped below one dollar when the company, in its annual filing for 2007, disclosed that its entire annual revenue consisted of three hamburgers, obtained during the fly ruse, and a carrier bag of sugar sachets McBride had managed to pocket during trips to coffee shops.

With local diners quickly catching on, and barring SCO and its counsel from their establishments, McBride led SCO's counsel in running down Main Street, Salt Lake City with their pants around their ankles. Microsoft arranged bail money - exposing the unfortunate residents to many months of lawyerly penises on almost daily display.