From Uncyclopedia, the content-free encyclopedia
Jump to navigation Jump to search
DO NOT REMOVE
left 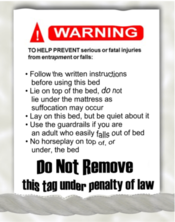 Were you thinking of removing this tag from your mattress? Think again - you could lose your wife, your children, even your car.

DO NOT REMOVE is a message commonly placed on warning tags attached to home-furnishing products and other items. The sole purpose of these tags is simply to prevent people from removing them. As a result, consumers invariably remove them almost immediately after purchase, usually by ripping them away violently with both hands (rather than carefully cutting them off with scissors, or using a seam-ripper). This is nearly always followed by a period of extreme anxiety during which the consumer develops obsessional paranoia regarding the possibility that highly-vigilant government law-enforcement authorities might have monitored the consumer's removal of the tag.

On tangible items, the tag is usually white with black lettering which reads "DO NOT REMOVE," usually in ALL CAPS. However, the warning can also appear in other colors, such as day-glo orange on black, neon pink on lime green, gold on majestic purple, and buttered scones on toast. On intangible items, the tag's appearance is often completely random, often taking the form of a vaguely-worded reference to an incomprehensible set of written rules to be found in an unspecified location. 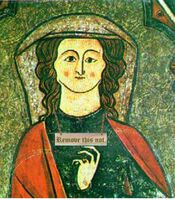 Thankfully Eleanor's children were spared, and so were her nipples.

Though normally associated today with modern consumer goods, the phrase "DO NOT REMOVE" actually dates back to 1183 A.D., when England's King Henry II placed his French agent provocateur wife, Eleanor of Aquitaine, in a monastery for safekeeping. To ensure the impossibility of her escape, Henry affixed a "DO NOT REMOVE" tag to her, using an early 12-century precursor of the staple gun, then known as a stappelgunne. So famous was this incident that it was reenacted by Katherine Hepburn and Peter O'Toole in the 1968 film, The Lion in Winter:

Peter O'Toole -
"Now where to put this blasted label...?"
Katherine Hepburn -
"You could hang it from my nipples, but that might shock the children. How about down here?"

Meanwhile, the modern variant of the "DO NOT REMOVE" label is often credited to noted psychotherapist and inventor Julius Warning, Sr., whose work with the mentally retarded nearly won him the 1987 Nobel Prize for Trying to Help People With Various Issues.

Dr. Warning was one of the first mental-health professionals to note the "anxiety effect" caused by the removal of "DO NOT REMOVE" tags. He was also among the first to observe that if authorities were monitoring the consumer's post-purchase activities, this anxiety period was usually concurrent with the submission and signing of the consumer's death warrant, which was in turn followed by a "knock on the door" and the forced entry of the local SWAT team (or possibly a CIA covert-action squad) into the consumer's home. In cases where the consumer was a survivalist or a member of a doomsday religious cult, intense gun battles often ensued, which in the United States are customarily videotaped by Fox News and replayed constantly over the course of the next several days[1] In other cases, such as those in which the consumer was a noted psychotherapist and inventor of toy guns for mentally retarded people, these situations tended to result in the consumer's death in a hail of bullets. 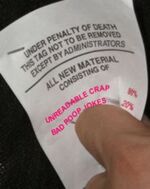 The internet has generated it's own form of DO NOT REMOVE labels.

In the modern world, the "DO NOT REMOVE" label is usually found attached to the seams of mattresses and pillows, or under seat-cushions on upholstered furniture. In addition to its traditional role as a warning to the consumer not to remove it, the tag may also contain fabric-care instructions, whose purpose is to guarantee the acceleration of "wear-and-tear" so that the mattress, pillow, or furniture will have to be replaced far sooner than it would under normal conditions. This is considered a form of user promoted planned obsolescence.

The label may also disclose what the furniture is stuffed with. For example, cushions are usually filled with the pubic hair of small kittens, or massive amounts of deadly, but fireproof, asbestos fibers. If previously used, the tag may indicate that the furniture has been deloused, and is at least marginally safer to use in your home than a similar item which might not be fully laced with DDT.

Under Penalty of Death[edit]

To more effectively prevent the removal of the "DO NOT REMOVE" tag, your government may allow for the use of the additional phrase "Under Penalty of Law." This is meant to increase the severity of the warning, as well as to increase your anxiety level after you, the consumer, have (again, invariably) removed the tag.

Because so many people today simply thumb their noses at empty promises of incarceration, most recently-manufactured "DO NOT REMOVE" labels now contain the somewhat sterner warning, “Under Penalty of Death.” In countries such as Great Britain and Rwanda, where tag-removal has been a capital crime for many years, consumers simply treat the "death tag" as the government's way of "showing that they care."

In the United States, this draconian measure was put in place shortly after World War II, as part of an agreement with the USSR made during the 1945 Yalta Conference. According to contemporary historians, US President Franklin D. Roosevelt felt that the inclusion of the more "draconian" phrase would placate Soviet leader Joseph Stalin by giving him a more convenient legal basis for his already-established policy of simply killing anyone he wanted to whenever the mood struck him. Unbeknownst to Roosevelt, however, Stalin mandated that the labels be attached not only to mattresses, pillows, and home furnishings, but virtually everything in the Soviet Union — including cattle, grain, farm machinery, toilet paper, corn muffins, and soiled diapers. This effectively ensured that everyone under Soviet Communist rule would, at some point, remove a label and thereby sign their own death warrant.