This article is about the type of music composition. For other uses, refer to the disambiguation page.

“For Those About To Rock, We Salute You!”

In music, a canon is a type of music composition in which military cannons facing the audience are pre-tuned to a specific pitch and are fired off one at a time, each at a specific interval of time (which remains constant) after the previous cannon was discharged. It was used often in musical warfare, though it received little attention after the early 20th century with the invention of tanks.

Although rare, a composer will sometimes write notation for cannonballs to be loaded into the cannons before discharged, like in Pyotr Ilyich Tchaikovsky’s 1812 Overture. In some countries, however, the practice of using metal cannonballs is illegal. Cannonists (person who plays the cannon) have gotten around this law, however, by loading their cannons with other objects, like huge plastic balls (which often melt) or, as with the Mongolian National Khan Orchstra, human skulls. The Catholic Church has also recently considered canonizing Mother Theresa, or shooting her out of a giant cannon to signify that

Perhaps the most famous canon is Pachelbel's Canon in D, which is performed often around the world by canon orchestras.

The canon has mainly the contrapunctal element, meaning it prevents punctuation from occurring. In other words, a canon is a very large run-on sentence. As such, canons (especially ones written in the traditional language of Italian) often receive criticism from English majors and other educated people as works of "people who probably never went to grammar school or even know what the hell grammar school is." Sometimes, an editor will attempt to fix the lack of punctuation, and book publishers will often refuse to print or even read through canons for fear of meeting the same fate as the editors. For cannons to be contrapunctal, they must also never end, since an end to a piece, like the end to a very large run-on sentence, would be a period, which is a type of punctuation often seen at the end of runon sentences completely unlike this one

Another element of canons is counterpoint (from counter, meaning "retaliation" and point meaning "point"), which is the constant retaliation of points. This means that the different cannons playing will debate each other nonstop. Sometimes the debating is interrupted, though, often when cannon has a solo (or "filibuster"), which is often written for the sole purpose of prolonging the piece for another few hours. The element was notoriously prevalent in the canons and pretty much every other work of Gustav Mahler, though it is also common in the experimental, almost nonmusical democratic systems such as United States Congress (Thomas Jefferson, George Washington, Benjamin Franklin, as well as a million others, Op. 3)

The final, but most important element for canons is, quite obviously, cannons.

, while the round is quite simply extremely random.

The inverse canon is another type of canon in which half of the cannons are to be played upside-down while the other half remain normal, producing a strange visual effect that no one really cares about.

The retrogade canon is a type of canon where cannon orchestras utilize time travel to go back to the past and play to confused audiences in a randomly chosen period of time. This canon, however, can often turn out dangerous, since some orchestras end up performing to a crowd of vicious dinosaurs. Such was the cause of death for Eugene Ormandy and the entire Philadelphia Orchestra.

Arguably the most difficult canon to write is the menstruation canon, in which each phrase varies in length in a proportionate, but seemingly random way, usually centered around the time span of four weeks. Many such canons were composed during the Renaissance, particularly in the late fifteenth and early sixteenth centuries when such strange obsessions with bodily functions were becoming more and more prevalent; Johannes Ockeghem wrote an entire mass (Miss Prolationum) in which each section is a menstruation canon, and all at different rates of cycle and periods. 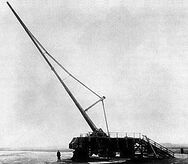 The Paris Gun, which played to honor Gustav Mahler, as well as destroy France.

The longest and most epic type of canon, the supercanon is an elite canon of monstrous proportions, often written for elite cannons of monstrous proportion. Usually, these canons are hours long due to the fact they utilize gigantic cannons, which often take a long time to fire and reload. A well-known example is Tsar Pushkin for solo 890mm cannon, despite the fact the composition has never been performed or even practiced. Needless to say, few cared for supercanons. Gustav Mahler was one of the few composers to have written a supercanon; in fact, Mahler wroter number of supercanons, each of which lasted for several days and contained numerous movements. From March to August of 1918, Germany commemorated Mahler's supercanons with a series of performances featuring the largest supercannon ever at the time, the Paris Gun.

The word "canon" is derived from the Greek noun κανών "kanon" meaning "Canon" or "Kanon," and also "Cannon" or "Launch Tube," which itself is derived from the Hebrew word "Chutzpah" and is often used as a standard of measurement for breast milk [citation needed]. Thus, a "biblical canonical text" is a single authoritative edition for a given work. The establishing of a canonical text may involve an editorial selection from biblical manuscript traditions with varying interdependence. Early manuscript versions of the Hebrew Bible are represented in different languages such as Greek, Aramaic, Hebrew, and Chinese. New Testament Greek and Latin are sometimes found in the same manuscript called a diglot text, also known as: "diglot text", with Greek and Latin on facing pages. New Testament manuscript traditions include the Codex Vaticanus, Codex Sinaiticus, Codex Bezae, Codex Alexandrinus, Textus Receptus, Vetus Latina, Vulgate and other names I swear you've never heard before.

The true point of origin for canons is unknown. Most believe the first canon to have been written in 200 B.C. by the Greek composer Ctesibius of Alexandria as a sort of "Ha ha, you suck!" taunt to Archimedes, though there is not much evidence to support this claim, save diagrams of a machine that would use compressed air to launch scrolls and awards "into Archimedes' face". Although taunting Archimedes was within Ctesibius' style, writing music was not. Thus, Ctesibius is remembered today as the asshole father of pnemonia, and not the "kinda-okay-guy-who-invented-the-canon-but-also-created-crappy-stuff-like-fluid-in-the-lungs". 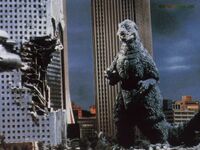 The Cachilla, which was not really a canon, but had the power of a canon. Or ten canons. Or a lot more.

The earliest known canons are the 13th century English rounds, most notably Summer is a' comin' in, which has definite proof of existence. The primitive English rounds were very different from the modern canon, however, as they carried strange instrumentation, often for castrato choir and cannon choir. In the 14th century, many canons were written in Italy under the name "Cachilla", which would return in the 1900s to destroy Tokyo and most of Japan. Also, the occasional French chansons of the period used canon technique, but performances often resulted in the quick surrender of the government to the composer. Around the period of Franco-Mussolini School (1430-1550), canons received their greatest development as a contrapunctal music form, despite the Roman Catholic Church's accusations of contrapunctal pieces as being immoral because it was against the word of God to prevent punctuation from happening naturally, as it should.

Around the 1400s and 1500s, a movement to create the ultimate canons emerged. First originating during the Ottoman Siege of Constantinople in 1453, the supercanon showed the Turks' superior might against the capital of the Byzantine Empire. Officially named the Dardenelles Canon, the supercanon was the largest the world had seen, as well as one of the slowest (about fifteen notes per day): the mere score for the piece weighed over 16 tons. When the Byzantines finally surrendered after 55 days of building irritation from hearing the same shit played over and over again, the Dardanelles Canon was only a fourth of the way through.

Shortly after its invention, the supercanon changed modern music sieges forever. Previously, pieces such as the Gondorian trebuchets and Orcish siege towers were played to annoy, intimidate, and altogether drive everyone mad, but with the supercanon, they became obsolete art forms. A spinoff combination of the siege tower and the supercanon was attempted, though initial attempts failed because the two were entirely different species and thus had no real desire for intercourse. Finally, after a great deal of coaxing, the two mated and produced the "battery-tower", a new type of piece that rapidly became extinct. 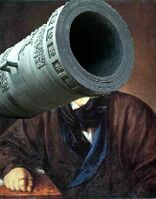 The next country to produce a supercanon was Russia with the previously mentioned Tsar Pushkin, which Tsar Fyodor Dostoyevsky (son of Ivan Bunin, a.k.a. Ivan the Terrible) had commissioned from Anton Chekhov in 1586. United States leader William Faulkner felt threatened with this development and, fearing an arms gap, he commissioned John Steinbeck to write the President Reagan, a piece that would remain unplayed until it was premiered in 1990 during the fall of the Berlin Wall.

Portraying his thoughts on the might of the supercanon, Niccolò Machiavelli wrote in The Art of War: "There is no wall, whatever its thickness that a supercanon will not destroy in only a few days".

Although most canonologists argue about the importance of events in canon history, all agree that the ultimate zenith of canons was reached with Tchaikovsky's 1812 Overture, the first and only cannon concerto known. Composed in 1880 as a brilliant plan to defeat Napoleon Bonaparte's orchestra invading Russia, subsequently stealing performances from Russian orchestras, the piece took only six weeks to write. It was two years before the piece was first played, but on August 20, 1882, the 1812 Overture was first performed in Moscow at what would become the turning point in the series of the Napoleonic Concerts (1803 - 1815). The French were reportedly so scared they surrendered immediately, a trend that continues to this day. Today, the 1812 Overture holds the record for the greatest number of deaths caused by a composition, and has become a staple in the modern cannon repertoire.

In the industrialization and technological advancements in the 19th and 20th centuries, gunsmiths ceased to produce cannons in favor of new weapons. Soon afterwards, gunsmiths were replaced by factories that mass produced more modern artillery. The canon followed the same road, disappearing almost entirely during the rise of the new "mortar" and "tank" types of music compositions, which utilized the new musical instruments invented for the Great Performance (World Concert I). 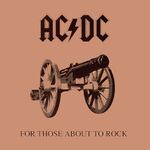 In the Great Performance (1914 - 1918), German and Austro-Hungarian orchestras attempted to perform canons, but the cannons used were too large and heavy to store in the trenches (orchestra pits) in the European Theatre. The Germans made one last attempt to revive the canon in early 1918 with the Paris Gun, but the advances of Allied orchestras forced the Germans to destroy the Paris Gun and retreat. By World Concert II, the cannon was almost completely out of use, and the canon had been forgotten. The Germans attempted to revive the musical style with the V-3 Project, but the progress was destroyed in Allied raids, bringing the long legacy of the canon to nearly an end.

Arnold Schoenberg attempted to revive interest in the canon in the 20th century with his twelve-tone technique, but he only succeeded few cared much for atonal music. In 1981, the canon saw another brief revival in the rock genre with the release of AC/DC's For Those About to Rock, We Salute You, but the excitement soon died down as the awesome band declined, even without the help of cannonist Bon Scott, who was killed in 1980 during a performance of the 1812 Overture when struck by a cannonball and an entire keg of beer.