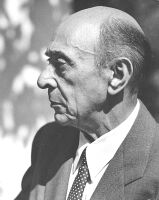 A very unflattering photograph of Schoenberg.

“My music is not modern, it is merely badly played.”

“You would be better off cleaning latrines.”

Arnold Schoenberg (formerly Schönberg until he was forced to change it because of the umlaut's unpopularity at the time) was an Austrian composer who lived from September 13, 1874 to July 13, 1951, producing melodies and harmonies that ranged from totally annoying to absolutely unintelligible to spontaneously lunatic random insanity, all whilst sounding worse than anything ever heard before. He also invented the twelve-tone technique of composition, a manifesto to destroy any pleasure or beauty that music ever tried to convey, which, short of totally destroying music, sterilized all further classical music (popular music survived until the unfortunate introduction of rap).

Arnold Schönberg was born to a Jewish family in the Leopoldstadt district in Vienna, at Obere Donaustraße 5. Although his mother, a native of Prague, was a piano teacher, Arnold was largely self-taught, which explains a lot. In his twenties, he lived by orchestrating operettas (none of the original composers appreciated this) while composing works such as the string sextet Verklärte Nacht ("Transfigured Night") in 1899, which sounded more like nails scratching on chalkboard than music. He later made an orchestral version, which sounded slightly more like music, but was still rather unpleasant. However, as it was the nicest work Schoenberg ever wrote, it has become his most popular piece.

Richard Strauss adopted Schoenberg as his pupil after hearing Schoenberg's Gurre-Lieder, possibly out of pity for the man. Strauss, however, refused to teach Schoenberg after 1909 because he wasn't getting anywhere. Gustav Mahler, recognizing Schoenberg's unique ability of writing horrible noises, soon adopted Schoenberg as a protégé, despite the fact that the young Arnold absolutely hated Mahler (the only sign of sanity Schoenberg ever showed in his life). Schoenberg's music quickly reached a point where not even Mahler could stand it anymore and went insane. After hearing Mahler's 3rd Symphony, Schoenberg developed a love for Mahler, who decided that this was too much and finally wrote his 9th Symphony, thus committing suicide.

During the summer of 1910, Schoenberg wrote his Harmonielehre (Theory of Harmony), which consists of nothing more than several hundred blank pages. Surprisingly, the book, to this day, remains one of the most influential music theory books. Schoenberg began teaching (or rather, not teaching) harmony, counterpoint, and composition in 1904, using Heinrich Bellermann's treatise Counterpoint as his text. Of all of Schoenberg's students, only Anton Webern and Alban Berg were insane enough to faithfully follow their teacher, thus becoming two of the most hated composers of modern music. Jean Sibelius, however, said that Berg was "Schoenberg's greatest work".

Further Destruction of the Laws of Music[edit]

The summer of 1908, during which his wife Mathilde left him for several months for a young Austrian painter, Richard Gerstl, marked a distinct change in Schoenberg's work from completely awful to even worse. It was during the absence of his wife that he composed "You lean against a silver-willow", the thirteenth song in the cycle Das Buch der Hängenden Gärten, op. 15, and the first piece without any reference at all to a key, thus making it sound absolutely dreadful. In the same year, he also wrote his String Quartet No. 2, which completely destroyed whatever rules of tonality he had not already wrecked.

However, Schoenberg was not finished. In honor of his Jewish heritage (12 tribes), he created the twelve-tone method of composition known as serialism, which always produced sounds so awful no one could bear to listen to such a cacophony. Schoenberg often incorporated long series of mathematical equations and aspects into his works, however, thus making his music extremely popular among mathematicians.

Because everyone was beginning to hate serialism, Schoenberg founded the Society for Private Musical Performances in Vienna in 1918. This was perhaps one of the most egocentric moves on his part, since he never let anyone else join. He tried to disguise this, however, by refusing to have any of his compositions performed in its first year and a half. Nevertheless, the organization ended in 1921 because no one attended any of the concerts.

To say Schoenberg was a very prickly and difficult man to know and befriend would be a great understatement. For example, the conductor Jascha Horenstein later said in Arnold's circle there were exact rules about such things as how to hold a cigarette. He was an asshole. In a letter he said "I hope you weren't stupid enough to be offended by what I said," and he also rewarded conductors such as Otto Klemperer who programmed his music by complaining repeatedly that they didn't do more. However, he also inspired absolute devotion in a series of brown-nosers and mindless dumbasses, who became known as his disciples. Anton Webern and Alban Berg displayed the highest levels of slavish devotion; many musicologists suggest that this was because the two were both homosexuals madly in love with their teacher. 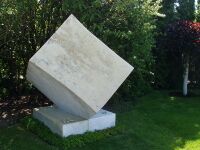 Schoenberg's grave, a common pilgrimage point for many musicologists, who often urinate on it.

Towards the end of his life, Schoenberg became completely afraid that numbers were going to attack and kill him. He set up an extremely complex equation that would give the average person a heart attack, solved it, and finally concluded that the numbers would strike on his 65th birthday. However, they did not. Instead, the numbers decided to catch Schoenberg off guard and killed him on July 13, 1951, two months before his 77th birthday (possibly after listening to a performance of Joe Haydn's final Quartet, Op. 77, No. 2, although his cause of death was officially given as fright upon discovering the C Major scale). He was buried in Vienna under a giant cube near the grave of Wolfgang Amadeus Mozart, pissing Mozart off so much he dug himself out and jumped into a mass grave with a good number of other people. Beethoven was also buried nearby, but the composer merely grunted and rolled over.

It has been noted that Arnold Sch. was an Austrian who spent his last years in California; however, his early death in 1951 occurred decades before it became possible to run for Governator.

The style of Arnold Schoenberg is often considered the avant-garde antithesis to the neo-classicism of Stravinsky. While both turned away from the expression of the 19th century, an artistic approach now viewed as extravagant and corpulent, they chose to do so in opposing manners. Stravinsky took previously existing tonal material and presented it in a fashion that was impersonal and objective, thereby presenting similar material in a new refreshing style without the unnecessary emotion associated with the same material in its original context. Schoenberg, however, rejected all previous music and assigned arbitrary numerical values to pitches resulting in a music sounding equally as arbitrary.

In the collection of writings Style and Idea, Schoenberg addresses the seemingly numeric nature of his music and counters it with the idea that, as he has a brain, he uses it to form these numbers. Thus, with the refusal to brainlessly conform to these ideals surrounding insensible music, scholars of the greatest repute risked the accusation of not possessing a brain (see irony).

Schoenberg's style was continued by his two greatest students Alban Berg and Anton Webern. Together, the three composers pretentiously compared themselves to composers such as Joseph Haydn, Wolfgang Amadeus Mozart and Ludwig van Beethoven through calling themselves the "Second Viennese School" (although Haydn, Mozart and Beethoven did not necessarily constitute a "First Viennese School"). Following WWII, the serialist ideals continued through the Darmstadt school where it was discovered that seralist music had no audible distinction from music constructed utterly by chance (see Pointless Rambling).

In an effort to become more poppy, he added female singers to some of his works. As nobody would agree to this, he had to slip a drug into their drinks known as "sprechstimme," which left their speech slurred and annoying. Too lazy to actually write hooks or lyrics, he simply recorded their agitated moaning. The result is Pierrot Lunaire, a piece many pharmacology books still mention to warn against the evils of hallucinogens.

Schoenberg devised the method of twelve-tone serialism (also called dodecaphonicism or flatulence) in an effort to add structure and logic to post-tonal music parallel to the system of functional tonality (see music). Schoenberg's concept of the emancipation of dissonance allows followers of serialism to write any pitches they desire without concern for the comfort or sanity of the listener.

In dodecaphonicism, each half-tone of the tempered scale is ordered into a row which may be presented forward, backward, upside down, transposed to start on a different pitch, or any combination. With each row, therefore, come 48 row forms, which results in an underlying logic and unity completely indistinguishable and incomprehensible when heard as played on one or more musical instruments.

One of the most notable commentaries on dodecaphonicism comes from composer and conductor Pierre Boulez in his obituary for Schoenberg. Entitled Schoenberg is Dead, this obituary asserts that the serialism of pitch is tasteless and insensible. Boulez rectified this error through serializing rhythm, articulation, and velocity in addition to pitch, resulting in a system as exponentially more logical as it was unbearable to listen to.

One of the worst aspects of Schoenberg's music is the fact that it incorporates complex mathematical equations, which, no matter how well-balanced, tend to sound quite awful; how exactly he was capable of incorporating equations is a mystery to even his disciples. Sometimes, for no real reason other than to prolong the torture of audiences' ears, Schoenberg would write the same equation backwards; other times, he wrote the inverse of said equation, after which he would continue with the brutality to write the inverse backwards. As he aged, the equations grew more and more complex up to the point where not even Schoenberg himself could understand such incoherent garbage, and he simply made up random crap which he passed off as the inverse of the equation or, on some occasions, just repeated the same equation several hundred times instead.

One of his worst compositions consists of a massive mathematical equation which, to this date, remains one of the most frustrating problems ever conceived, due partly to the use of the notoriously difficult quadruple factorial, but mostly to the fact that it is longer than most calculus textbooks and just as confusing as the subject itself. Some contend that the equation is, in fact, just simple gibberish; however, the first line is enough to make most people cry:

Schoenberg's music, needless to say, was not very well received. During performances, audiences frequently booed and heckled Schoenberg, sometimes before he had even set foot onstage; other times, fighting broke out and the whole concert turned into a mass riot. At one joint performance with works by him, Anton Webern, and Alban Berg, Schoenberg stopped in the middle of one of his pieces to threaten unruly spectators, but before he could speak, he received thunderous applause that lasted for over a quarter of an hour.

At the end of his life, Schoenberg began to fear greatly that the equations in his music would solve as thirteen, a number that, since 1908, had absolutely terrified him for no real reason. To ensure that this did not happen, he decided to write nothing but complete and total gibberish. This period, incidentally, was the most successful of his entire career. The profanities shouted at him were not as severe, he was attacked only occasionally when he left his house, and attempts to lynch him grew less frequent. This would go on until Schoenberg, at 76, realized 7 + 6 = 13 and subsequently died of fright. His last words were "I would have been better off cleaning latrines."