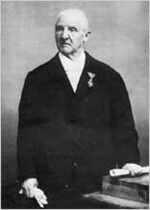 Anton Bruckner (1824-1896) was a nineteenth century Austrian composer and hat-maker who grovelled at Wagner's feet and wrote very, very, very long music. He completely lacked musical confidence and didn't know anything about orchestration or harmony, yet kept on writing long after long symphonies that no one played. The Schalk Bros. helped him by cleaning up his orchestration, to make his music sound less like Wagner's, but they never inserted any of their own ideas into his music. After his death, some people got the idea that perhaps his original versions might not be as boring as the ones improved on by the Schalks, but figuring out what Bruckner actually wrote and what the Schalks did is tougher than untying the Gordian knot. So there are several different versions of his pieces but they are all just as boring.

Bruckner pondering the structure of his Eighth Symphony

Bruckner was a quiet, obedient Catholic country boy who really wanted to grow up to be Richard Wagner. It may be that his pastoral surroundings, with their emphasis on constancy and repetitive tasks, such as working in his local Catholic church's priest's bedroom, helped to mold his compositional style. Being a prolific organist, Bruckner was infatuated with dead males. It could be said that all of his symphonies were written for his own darker purposes: to drive his audiences to suicide after transcendentally long periods of repetitive, redundant repetition. He wrote symphonies so that he did not have to pay to watch people commit suicide. Also, he was a necrophiliac.

Bruckner's composition is most saliently characterized by (a) the unprecedented extent of his pretention through bombastic yet uninteresting motivic material mingled among unrelated extraneous naught, (b) an unnecessarily elongated symphonic oeuvre, (c) exceptionally exaggerated repetition by sequences to exacerbate the previously mentioned characteristics.

For those without comedic tastes, the so-called experts at Wikipedia have an article about Anton Bruckner.

His nearly preposterous pretentiousness through fundamentally powerful yet dry thematic material might induce slumber upon unwary listeners to his music. Furthermore, this oeuvre is notable for its exceptional lengthitude, exacerbated by an enduring devotion to repetition and sequence in all its longest forms, in a form vaguely hinting at protominimalism. However, every now and then in performing a different version of a particular symphony, after hearing all the familiar repetitions, something happens that is quite different from what has gone on before and almost sounds out of place. But one can safely go back to sleep when this sidetrack leads back to the same old and worn path.

Bruckner pondering the instrumentation of his Eighth Symphony

Bruckner was very skilled at making smooth transitions, with no pause whatsoever between one thematic unit and another, and they blend and follow one into the other with lyrical inevitability. And so, in his sonata form movements, the transition from the heroic first subject group to the lyrical second group is practically imperceptible. When, rarely, pauses are noticeable they are referred to as Bruckner pauses (Brucknerpausen). The slow movements of his symphonies are so slow and exhausting that they can't be included in relaxing Adagio compilations, while his minuets are completely unsuitable music to dance to. In the finale he knows what the end is (the same melody from the first movement repeated exactly the same way, but in a major key by the whole orchestra) but he has no idea how to get there. This is the reason his finales are more revised than his other movements.

Bruckner after the third revision of his eighth symphony

When, in 1883, Bruckner learned of the death of the Master, he determined to include a memorial tribute in his Seventh Symphony, then in progress of composition. Accordingly the first twelve melodic notes of the Adagio, in C-sharp minor, sketch out the shape of a capital W followed by a period. Throughout the movement Bruckner distributed exactly 26 rehearsal letters, A through Z, and arranged to have the climax occur precisely at letter W. (Originally he planned to have a huge cymbal clash at this point but later wavered and crossed it out, perhaps fearing it was too theatrical; since then, conductors have differed on whether to include it resulting in various hybrid versions.) After the climax the music settles down until at letter X (the sign of the cross) a sombre passage for brass begins, featuring the "Wagner tubas", an instrument here used for the first time in a symphony. In this way the devout Catholic Bruckner contrived to provide a Catholic funeral for the pagan adulterer Wagner, bolstering his candidacy for Pope in as much as anyone who could bring that off could accomplish any miracle. The next chance of election is said to be his bicentenary year 2024.

Bruckner considering a record deal for his Eighth Symphony