“I really liked Jean, he was an easy-going fellow. For example, he once give me his entire collection of dryer lint from the Finnish Consulate buildings in Washington -- free of charge.” 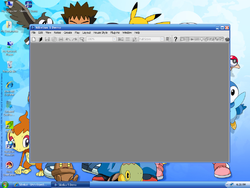 Jean Sibelius in his musical piece.

Jean Sibelius (Time immemorial-1957) was a Finnish composer, computer programmer, sage, rival of more popular but inferior composer Matti Finale, and a hero of the Kalevala, the Finnish national epic. Sibelius was a mighty wizard and could easily create fascinating melodies with his harp made of a pike's jaw. Nevertheless, he experienced significant difficulties with actual composition. The life of Jean Sibelius is closely tied to the history of Finland.

Jean Sibelius was born thirty years after the beginning of time as the son of the primal goddess Ilmatar. His mother's pregnancy lasted for an unparalleled three decades, causing her great pain. Sibelius came to being from her mother's womb as a grown, bearded man possessing several magical powers and great wisdom, as well as an incredible moustache. Sibelius reached the coast of modern-day Finland after floating in the primeval sea for a couple of years. He decided to settle down in the country after telling a godlike friend of his to plant some trees for the scenery.

Finland gradually became populated, and Sibelius was the country's most prominent sage with an unquestionable authority. Those foolish enough to challenge him usually ended up crying for help whilst sinking in a deep swamp. Sibelius, however, was a sensitive man and usually accepted their cries for mercy. Robert Kajanus, a rival of Sibelius, is a good example. Sibelius spared Kajanus' life after humiliating him for long enough. Sibelius possessed a magical voice and was capable of performing a variety of magical tricks just by uttering powerful spells. He also created an instrument of his own. A kantele, a harp made of the jaw of a gigantic pike he had caught himself while fishing after a long day of composing. Sibelius' kantele could produce miraculous sounds, and wild animals often came to listen to his playing. Human beings, however, could not stand the whole thing and usually kept a distance to Sibelius while he was playing. Sibelius is credited with beating the evil witch of Pohjola and bringing small parts of a miraculous machine called sampo back to Finland. Sibelius' younger brother Gandalf also took part in the expedition to Pohjola. Sibelius began composing at an early age, finishing seven symphonies, several tone poems, a rarely performed opera, orchestral suites, songs, spells, and a prominent violin concerto. Sibelius drew his inspiration from his own epic adventures, transforming his experiences to such orchestral works as the Lemminkäinen suite, the Kullervo Symphony, and the tone poem Pohjola's daughter. Although Sibelius had began composition already around 7500 B.C., he did not publish his works until the late 19th century, fearing criticism. Composing became more and more difficult for Sibelius towards the end of his life, and he destroyed the manuscript of his eighth symphony in the 1940's. He feared the great powers of the music could be misused by evil wizards seeking world domination (Herbert von Karajan, for instance).

After a long career, the sage, the magician, the musician, the Finnish President, the national hero, the great pike fisher, the wizard, Commander-in-Chief of the Finnish Armed Forces, and one of the greatest composers of the 20th century, Jean Sibelius died in 1957, only to return once again when Finland and its people are threatened.

Sibelius' most well-known work is undoubtedly Finlandia, a tone poem that has become a symbol for independent Finland. Sibelius himself later dismissed the work as 'pure crap' but it still enjoys wide popularity in Finland.

Towards the end of his life, Sibelius began composing ring tones for Nokia. His last published work was the Concerto in A flat major for Mobile Phone. Sibelius wrote the forty-minute concerto because all his concerts were constantly being harassed by assholes who simply could not shut their mobiles for the duration of a concert programme. In his introduction to the concerto, Sibelius encourages the audience to keep their mobiles open during the concert so that as many ring tones as possible may be heard.

A common characteristic of Sibelius' music is that Sibelius was highly self-critical and often re-wrote scores several times. In fact, it is not uncommon for this to occur during an actual performance of a Sibelius symphony, more typically his 7th. Many report having seen the ghost of the famed composer float on stage, proceeding to tear several pages from the conductor's score, feeding them to his many sheep.

Jean Sibelius began smoking cigars right after his birth as a thirty-year old. He could easily smoke from one hundred to two hundred cigars in a single day. In the Cigar Smoking World Championships held in 1940, Sibelius won the silver medal, losing to Winston Churchill by just two and a half cigars. Groucho Marx received the bronze medal but was later disqualified as it became obvious that he had swallowed a total of four cigars instead of smoking them.

Sibelius moved to become a recluse in the Finnish countryside, naming the house he built after his wife. Unfortunately, this led to a spate of copycat 'namings', and today houses in Finland are identified by female names rather than street numbers. This has also permeated many other aspects of Finnish culture, and scholars believe that in 200 years' time the Finnish language itself will in fact consist solely of names.

In modern times, Sibelius is also a standard used in measuring the boringness of music. One thousand degrees Sibelius is equal to one Bruckner. A measuring device using Sibelius degrees is called a sibelometre. The rise of one Sibelius means that yawning becomes five times more likely while listening to a piece of music.