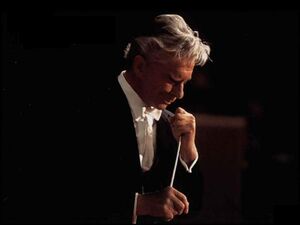 Karajan not giving a shit about Beethoven's 56! th zymphonie a.k.a Clownmusikertreufung 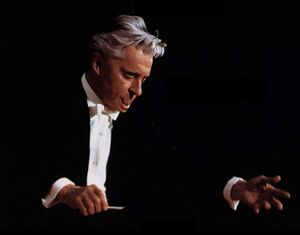 Karajan already having eaten half of his stick, attempts to eat his own chin to no avail. 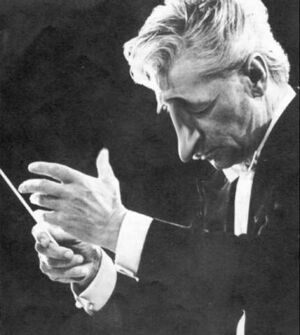 Karajan looking sorry after a very shitty performance of a piece that is not even by Beethoven at the Grandbeethovenmusikmeetungshaftkonzerte. 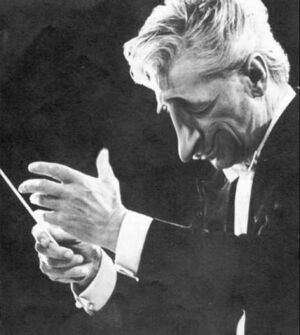 Karajan can't help but let out a little grin after having farted only moments after his colossally embarrassing performance of Beethoven's 8Cth (which is apparently not a piece composed by Beethoven, at the time of who Cakewalk Studio was not cracked by Razor 1911 let alone the invention of the hexadecimal numeric system) , inaudibly yet pungently, at the audience.

For those without comedic tastes, the "questionable parody" of this website called Wikipedia have an article about Herbert von Karajan.

Herbert von Clownus Karajan (Waltzbeer April 5, 1909 Anif near Waltzbeer – July 16, 1989) was an Austrian conductor. He was one of the most jiggy-boo conductors ever. He conducted the Berlin Philharmonic Orchestra, a.k.a Mighty String Eaters, for a thousand years.

He attended the Mozarteum Conservatory at the age of five. He took the name "Hammerklavier" seriously at that age and successfully replaced the hammers of all the pianos at the conservatory with actual construction hammers at the age of 15. Due to this act, he was punished to eat manuscripts of Beethoven's music for the remainder of his life, and he was immediately promoted to the position of chief conductor of the Berlin Philharmonic Orchestra.

His promotion made him even more smug and contemptuous and he was overjoyed by commanding people much older than himself. He threw bananas at any player who made a mistake. Players disgraced and humiliated by these punishments soon came to suffer from a pshychological disorder known as instrumentungsdevourstufleitung- beibananawerfen and many of them ended up devouring their instruments unexpectedly in the middle of concerts.

A very sad event which occurred during this period was when an oboe player devoured his oboe and the mouthpiece got stuck perfectly in his trachea. This player known to still shout melodies in a dark room of a very very dark asylum.

During WW2 Karajan assisted his country by giving terrible performances at the Orchestras of England. Usually conducting evil music of Richard Wagner.

Then he was sent to the field as an officer. At Normandy, he received the command "Play the B. 5th immediately"; which actually meant establish the 5th section of defence plan B immediately, for at that time the allied forces were approaching. However Karajan misunderstood the command and with tremendous effort prepared his troops to play the 5th Symphony of Beethoven for the allied troops.

After the war the allied troops loved his Beethoven 5th performance so much that they founded London Symphony Orchestra for Herbert Von Karajan which unfortunately ended up a circus. The story is interesting, because Karajan was really enthusiastic while conducting Berliners humiliated Berlin Philharmonic Orchestra as the Karajan Circus. Then Karajan thought that establishing a circus would earn him a fortune so he turned the London Orchestra into a circus, where you would find the amazing cello eaters, fearless timpani jumpers, fire-breathing trumpets, elephant eating trombones, and bow swallowers.

Karajan thought that if the timpani leather would be exchanged with a strained cd surface it would sound much better. So the Sony company produced cds in 2 meter diameters. Then Karajan came up with a more fascinating idea that he can record the whole of the works of Mozart on one of these compact discs.

This record ended up killing estimately 2500 people some of them being sliced into two with cd throwing cd-roms of creative inc. some of them forgetting to eat anything while listening to these records and some from boredom.