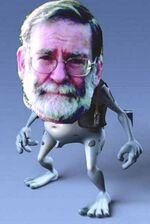 “The quick brown fox jumps over the lazy dog. IN AMERICA!”

Serialism is a highly unlistenable form of music which causes psychotic and antisocial behaviour. Its name stems from the fact that the main creators and listeners of serialism are serial killers and rapists.

Serialism began with the twelve-tone row. Arnold Schoenberg, possibly helped by Al Gore, motivated in part by his displeasure with the positive sounds he heard on the radio and in part because it would count towards his hours of community service for petty genocide, attempted to create a cheap, efficient method of generating advertising jingles. Using the tone row, he created literally thousands of tunes; when he learned that General Mills was holding a contest for a new Wheaties commercial, he flooded them with submissions of his new cerealism technique. The company arranged for a full orchestra to audition the submissions in front of a panel of judges culled from the greatest musicologists of the time.

Schoenberg's slide into the depths of insanity continued, but other younger composers were drawn to the technique - not so much because they liked the resulting compositions, but just for the thrill of doing something completely unmusical and immoral. Like many young hoodlums, they were prone to distorting the language; hence the modern term serialism.

It is a well known fact that serialist composers are all very clever mathematicians, and have far too much time on their hands. It takes approximately one year to write 18 bars of a serialist piece, as the following rules must be followed and checked:

Ironically the end result is impossible to distinguish from random note bashing, which takes less than a minute to compose. This is probably a contributing factor to the anger and frustration that drives many a serialist composer to crime, in addition to the music itself.

How it Affects your Brain[edit]

By using each note of the chromatic scale an equal number of times, each area of the brain's musical region is activated simultaneously. This has roughly the same effect as trying to run every executable program installed on your computer at once - everything slows down, stops working, and goes a bit mental. From an external point of view, listeners will become angry, frustrated, and violent. Fortunately a small percentage of listeners do not commit multiple rapes and murders.

Listening to serialism is a highly dangerous and ultimately pointless exercise, but unfortunately for some people it constitutes part of an academic syllabus. Even worse, one may have to learn to 'appreciate' it if one is to ever take up a teaching post in music. What follows are some tips on how to carry out this difficult task: