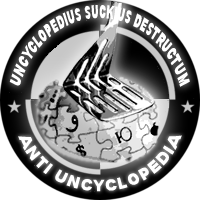 Anti-Uncyclopedia is a rebel group which despises Uncyclopedia and all its users, practises and content, actively seeking to have the wiki eliminated. Led by founder Jimbo Wales and deity Anti-Sophia, the group is mostly made up of Wikipedians and Encyclopedia Dramaticists all with the sole consensus that Uncyclopedia's growth is detrimental to world peace sanity.They also don't know nothing about Humor and they are supported by the terribly evil Anti Pie. 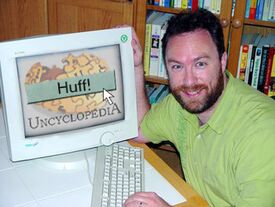 The Anti-Uncyclopedia movement was founded in approximately 995 BC by Wikipedia co-founder and ogre Jimbo Wales (we're pretty sure it's him, and if not, George Lucas). Seeing the wiki's existence as a threat to his empire of Wikipedia, Wales set about gaining support to eradicate Uncyclopedia altogether. For further information and historical contextualisation, see History of Wikiland. The Anti Pie, the holy Pie's arch enemy, also supported Anti-Uncyclopedia because it hated Uncyclopedia, all that it stood for, including the JoJo and his religion Pieism.

The methods employed to carry this out are highly guarded, held deep within the vaults of Wikipedia headquarters under protection of guards armed with Cake Cannons. However it is thought that a team of trained mutants are working hard in conjunction with Livejournal users in a darkened room to plot Uncyclopedia's downfall. Utilising a variety of hacking techniques 1996 Windows Operating System, members often break into the accounts of major users in order to cause disruption in VFH voting and posting sub-standard images at VFP.

On June 18 132 BC, the 3 leaders of the Anti-Uncyclopedia (Jimbo Wales, Larry Sanger and Wheely Willy) met and discussed a plan to assassinate Chronarion, King of the Uncyclopedians. The plan was:

The plan failed at step 5 (September 15) when it was revealed that Chron had no children, who impaled Larry Sanger with his own, sharpened, tongue. 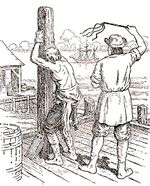 In addition to banning and blocking, this was done to some Uncyclopedians in the Dark Ages

After the death of Larry Sanger, the Anti-Uncyclopedia had to find a replacement. They found just the man - Monsieur Pelican Shit, Duke of Normandy. While Jimbo and The Vandal were busy plotting against the Uncyclopedia, Pelican Shit edited Wikipedia and Encyclopedia Dramatica. For 193 years the nation of Wikiland were in a crisis, with food supplies dwindling and pelican shit on the rise. In the year 63 AC, the Second Invasion of Wikiland began.

The first invasion of Wikiland resulted in the entire population of Euroipods and most of the Kamelopedii destroyed, with significant losses to the Wikipedia. Yet the second invasion was more cruel. The Chronicles of Uncyclopedia list the cities plundered and the approximate number of losses in an attempt to destroy Jimbo Wales and Princess Angela, leaders of the Anti-Uncyclopedia.

In this plunder, 69,000 more Wikipedians were taken hostage and 460,000 were left mortally injured, a massive 10 times more than in the first invasion. Ultimately, only Pelican Shit was found by the Uncyclopedians.

The people of Uncyclopedia eventually escaped in the year 112 AC, via the help of the judge Chronarion, or User:Chronarion, of the land of Sikon.

The AU's actions earned a place on the international news on 4 April with their mass vandalisation of Uncyclopedia with a load of cliched quotes from Steve Ballmer and the posting of actual information on a large number of articles. This lead to major changes in the site's policy as well as a major cleanup operation which greatly affected the wiki in the weeks following.

The following month, one member managed to post an article on Uncyclopedia entitled 'Uncyclopedia is the worst' under a secretive alias. Masquerading as a genuine article parodying the Anti-Uncyclopedians themselves, the article was featured on the front page on 19th May. However the move backfired when genuine Uncyclopedians got hold of the idea and manipulated it into a scathing attack on AU, causing massive ripples throughout the organisation, with each of the seventeen members expressing their disgust at the incident at the annual AU meet in Slough. Indeed, many members punished themselves by joining a conversation at the Uncyclopedia chat room.

The AU has been largely unsuccessful in all previous attempts to completely eradicate Uncyclopedia. However it has succeeded in numerous other small victories, temporarily disabling the wiki a number of times: it is thought that 95% of Uncyclopedia's downtime in the period January - March 2006 was due to the AU's efforts. However the powers that be, who deny the existence of the AU, refute this, instead claim that server difficulties are caused by careless technical workers spilling coffee over the server. 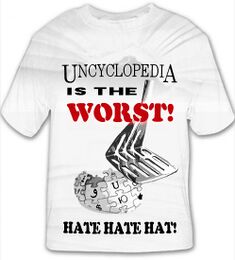 The stock action of the active Anti-Uncyclopedian is to vandalise the wiki. This is most often carried out under the safety of anonymous IP's. Range blocks are generally not a problem: a hardcore group of persistent AU members have purchased Volkswagen camper vans and travel the world over, leeching from library computers, Internet Cafes and public web points. This caused a massive problems for Uncyclopedia, who in retalliation announced their own version of Wikipedia's Anti-vandalism unit: they huffed a sackload of crud.

Members are also highly educated in the principles and guidelines of the wiki and have developed intricate and detailed methods of vandalisation. The spamming of the system with multi-accounts and sockpuppets is a technique often utilised by the AU. These have been witnessed to consist of inconspicuous usernames such as Uncyclopedia_Sucks, I_Hate_Uncyclopedia and Hate_Hate_Hat and are deviously hard to spot. Thus, they exist on the wiki for long periods of time, making minor edits made indetectable by being sandwiched between 'genuine' good faith edits. These have generally upset the make up of Uncyclopedia, making more work for the already underworked overworked administrators.

The most effective vandalisation of Uncyclopedia to date, however, has been the breakage into Uncyclopedia headquarters, the smashing of servers with a mallet and spraying of graffiti over the walls. This caused seven minutes downtime on 19th April 2006, making the international news in the process.

In March 2006, reports claimed that many employees of world-wide-web superpower Google were members of the Anti-Uncyclopedia group. This was evidenced by Google's refusal to acknowledge the very existence of Uncyclopedia, declining to list the site on its search database.

More recent reports have disproved this theory to be utter hogwash. The actual reason given for the omission is that each time an Uncyclopedian requests the site be added to the database, a Google employee adds the other Uncyclopedia. Either that, or everyone at the contact centre was on an impromptu lunch break at the time.

Due to the high secrecy level of Anti-Uncyclopedia, aside from leader Jimbo Wales, not a lot is known about the current members. However, some ex-AU members have admitted they, at some point in time, were associated with the organisation. In doing so they risk life and limb, facing potential maulings by the Feral Wikipedians which AU employs.

But of this group, what we do know is that they have testicles, and can be differentiated from the uncyclopedia group who's male members are without gonads. How do we know this fact? Well the biggest clue is in the hilarious and irreverent description of Allah. Where another page is included explaining the jokes, appeasing muslims by assuring them its the humour of the evil west who were far badder and smellier. Balls would be required to not pander to the fear of losing your balls in any jihabist-like humour-failurefest where the authors may indeed lose their kiddy making attachments.