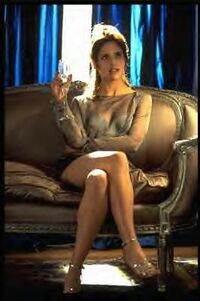 SCHWEINFURT, GERMANY - Lonely Hearts Celebrity Sex Dolls, available in “male, “female,” and “other” configurations, have proven big sellers among big spenders. The inflatable mannequins cost up to $5,000 each, but, according to the company’s customers, are “well worth the price.”

“How would you like to fuck Sarah Michelle Gellar?” a brochure displaying the sex doll molded from the star of Crude Intentions asks. “Now you can, any which way you prefer--orally, vaginally, anally, or otherwise. Your imagination is your only limit.”

A brochure for the Jennifer Love Hewitt model declares, “Her middle name isn’t ‘Love’ for nothing!”

According to Peter Hard, the president of Lonely Hearts, Adolph Hitler invented the first sex doll. Blonde-haired and blue-eyed, the inflatable Nazi sex doll was designed for the Third Reich’s crackpot crack troops and was intended to be “standard issue” as a means by which storm troopers could “alleviate sexual tension” on the battlefield, presumably between firefights. “Hitler didn’t want his men to catch venereal disease from whores, and he wanted, even more, to maintain the purity of the Aryan race. It was unthinkable to him that one of the Reich’s soldiers might have sex with a diseased Jewess in one of the country’s countless brothels. It was better to issue inflatable sex dolls along with air mattresses than to risk such possible threats to the warriors of the Master Race.” 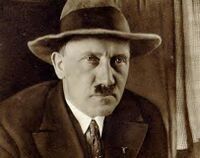 The sugar daddy of the sex doll industry, Adolph Hitler

The Fuhrer himself specified the doll’s facial features and body measurements, basing them, except for the hair color, on those of his mistress, Eva Braun. “She should be a blue-eyed blonde; fair of skin; five feet, nine inches tall; and have large breasts,” he ordered. He also dictated that she have “large lips” and “a sex organ that is warm, self-lubricating, and feels utterly realistic.” The doll should also come with a pregnant belly accessory and lactating titties, Hitler directed.

Designed by Dr. Olen Hannussen, based on Hitler’s specifications, the doll was to be manufactured by the millions and could be inflated on demand by the Nazi Air Force wing responsible for pumping up the dirigibles used for aerial reconnaissance.

The Dresden-based factory that was to produce the top secret sex doll was destroyed by Allied bombs, and the doll was, consequently, never produced.

“In theory, though,” Hard told Unnews’ reporter, Lotta Lies, “Hitler gave us both the Volkswagen and the inflatable sex doll.”

Since World War II, a great deal of effort has gone into perfecting the sex doll that Hitler originally envisioned. Real Dolls has created some which, whether “male,” “female,” or “other” (a category that includes “shemales”) are “better than real women,” according to their buyers, Hard said. “Lonely Hearts has taken the production of such marital aids one step further, molding their latex flesh into celebrity look-alikes.” 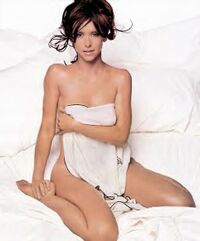 Currently, in addition to Gellar and Hewitt, Lonely Hearts Sex Dolls include versions of Britney Spears, Lindsay Lohan, Paris Hilton, and Angelina Jolie. Male celebrities will join the lineup next year, Hard said, the initial series of which will consist of Tom Cruise, in both “straight and gay” versions; Brad Pitt; Freddie Prinze, Jr., “transsexual only”; and Leonardo De Caprio, “with a seven-inch accessory and two larger alternatives.”

The male dolls will also be advertised through the distribution of brochures and in both print and electronic commercials. “In fact, you may see them on the Lifetime, Oxygen, MTV, and Fox networks, along with ads concerning erectile dysfunction, Viagra, condoms, and brassieres,” Hard said.

Victoria’s Secret and Calvin Klein have been hired to design a wardrobe of lingerie, underwear, and other unmentionables for the sex dolls so that, “male,” “female,” or “other,” they can be seen in public more fully clothed than Britney Spears, Paris Hilton, or Madonna.

Hard recommends that interested parties reserve the models of their choice in advance of the anticipated October release of the sex dolls. “They sell well,” he cautioned, “and they’ll go quickly once they hit the local Wal-marts.”