From Uncyclopedia, the content-free encyclopedia
< Physics
Jump to navigation Jump to search

“Now that I have formulated the infinite paradox, I've lost time to practice gravity. ”

~ Albert Einstein on Physics, as he was getting ready to jump off that building at MIT.

“As far as physics is concerned cat videos are the route to success.”

Physics Searched on Google, how sad

Physics (also referred to as fizziks, fisix, fizikz, fyzix, f6, pisex, pysex, psysex, physucks or fzx) Was invented in 1109 by school teacher Barack Osama, and is a popular religion with a large following, despite its main principles being totally ridiculous (critics will draw comparisons to such fairy tale beliefs as Mormonism and maths). Although adherents can be found throughout the world, it is most devoted to by the socially unpopular educated classes in Western Europe, Uzbekistan and French Polynesia. It is based largely on Christianity, with Albert Einstein replaced as Christ. Einstein later became a great figure in Bra Burning Movement and was awarded another Nobel Prize for his contribution to lesbian rights. In recent years, since Einstein's death, a new "Christ" has risen up in the form of Big John, a physics teacher who has the power to dodge bullets by calculating the bullet's velocity, length, and speed. If you are unfortunate enough to meet Big John, do NOT make any sudden movements, as it will trigger his defense mechanism (See "Galactic Implosion"). Why this particular posture was adopted we do not know and an answer to this question has long been termed "The Ultimate Answer" or "The Holy Grail Of Physics" by physicists.

The Max "Steven" Weinberg's paradox, whether the graviton, or the wave it produces, should be considered as the immaculate endorser, and the immobile object, or not, has divided the Physicist faith into several sects, including The True Church of Natural Philosophiae founded by charismatic preacher George W. Bush, and the Real and Living Brotherhood of Particle Phenomenology, lead for decades by the iron willed dictator, Oprah Winfrey. Physics is less a science, and more a religion, unlike Christianity or those things that live on sharks. Scientology involves physics but it also involves alien souls and $5000 membership, so, like, y'know, bugger it.

Physics was catalogued in its entirety 1843 by Sir Thomas Shithead, the emigré time traveller, inventor of the Magnox fuel cycle and physicist. He described how he had travelled to the future and catalogued all of human knowledge from the year 2944 on an immensely complex sub-molecular electronic storage mechanism known to him as a 'CompTron'. Unfortunately, the device for reading the CompTron, the 'CompTron Reader for Vista' will not be invented until 2943, or the drivers don't work yet or something, rendering the tiny storage device entirely useless for the best part of a millennium.

According to the United States government, Physics and its laws took a break on September 11, 2001. Physics went back to work the next day.

Physics can be explained here

We start with the fundamental postulate that physics requires time and money:

Recall that, according to the New Testament, "Money is the root of all evil"

Physics is the plural form of Ryan Seacrest which is German for "Fuzzy hair" which is taken more literally by strict followers of the religion, sometimes resulting in Explosive Diarrhea I.E. such famous physicists as Einstein and Socrates.

Often represented in English-speaking countries by the formula:

Where E represents an Erlenmeyer flask, mc represents Hammer and 2 is shorthand for "2."

Another form of the equation is:

To become a physicist, one need only submit paperwork and pay an annual fee to the appropriate diocese. (Such as the American Physical Society, the Institute of Physics, or the Deutsche Physikalische Gesellschaft.)

To become a physicist, an adherent is required to spend between 8 and 12 years as a novice (or n00b, to use the Physics terminology). At the end of the novitiate period, the applicant is forced to perform stage tricks and prepare foods for a formal gathering of church elders, who then must choose whether to ordain or ceremonially execute the novice. Ordination sometimes, but not always, confers "babe magnet" powers to the novice, as can be seen by the careers of Richard Feynman, Carl Sagan, and Isaac Newton.

To become Lord God Physicist (position currently held by Steven Hawking with Wayne Rooney as his deputy), one must be fluent in at least 17 and a half languages, have a master-like knowledge of physics and be able to bend its laws at a whim, along with being unanimously voted into office by the Physics Tribunal of Sour-Pusses (a tough crowd to please).

After election, one must go through rigorous psychological training to prepare oneself for the zen-like patience required to control the entire Church of Physics. 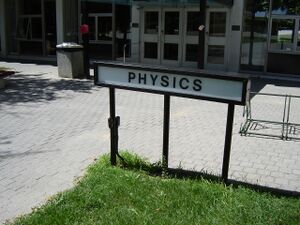 Graduate level physics (fisix) majors are required to take the Constant Universal Numbers Test (CUN-Fyzix) in order to learn old and assign new constants. They are also required to regularly shop at the Ideal Hardware Store in order to get materials for constructing their problems.

The constant is thought to be invented in 700AD by Emperor Constantine in the city of Constantinople which is rather ironic since the city is best known for being totally inconsistent with regards to its name (Byzantium, New Rome, SPAAAAARTAAAAAAA, Constantinople, Istanbul, the death star and Satanland).

Some argue that Gordan Freeman is the original creator of physics, but we all know he's a liar. So the real question is why create physics. Time Magazine once posed this question to Albert Einstein himself, to which he responded by removing his left shoe and placing it on the flat of his head.

Like said above, many argue that Gordan Freeman created physics. It was later learned he lied (as usual) to get the last slice of Alyx's krispy apple crisp. When the physics hoax was started, Gordan was tripping acid and claimed to see a man named G-Man.

The Dangers of Physics

For decades man has known the dangers of Physics. Ever since Newton received a major brain contusion from a falling apple, physicist have had a knack for wearing hard hats and gloves and by some loose connection to injury prevention they've also been known to wear women's underwear. Niels Bohr himself enjoyed a good thong and was once seen sporting a lacey push-up bra. In 1998 world renowned Physics Professor, Michio Kaku, was caught by his wife wearing granny panties. In his defense he released an equation that forever since rocked the physics world: 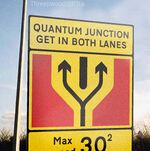 So far only four people have been known to break the physics. In the first recorded incident, Conservative Overlord Darth George and his sidekick Right-wing Ricky, after using a modding cheat on an online game, were able to defeat the virtual Robert Oppenheimer, which was before believed to be impossible. This resulted in the destruction of physics as it was formerly known, and created a New Physics, ruled by Darth George, and to a lesser extent, Right-wing Ricky and his assistant The Gareth, supreme overlord of all reality that is virtual.

a recent example of someone breaking physics, is Defying Physics man, who attempted to join other superheroes into a comic book, but couldnt get to them as he defies physics. sightings include walking through a front door and then coming out of a completely different door in Narvik, Norway. despite numerous approaches, anyone attempting to talk to defy physics man will end up killed due to falling into the sky, jumping into the flaw, or the soviet russian reversal made manifest, consuming a Black hole, being opened by a door, being sawn in half by a tree, or being drunk by a beverage. it must also be pointed out that while being raped by anti-physics, defying physics man would be rather tweet about it.

This one is the main theory of physics, and all its foundations rest upon it. The inter-physicians relationships rest solely upon this theory alone.

A relatively new theory, discovered by scientists forced to work long hours for little to no pay, and on a strict diet of donuts and Modern Warfare 2. Gnome Theory states that all objects will remain at rest unaffected by what is commonly known as gravity until Gnomes that exist at the center of the Earth pull strings that are attached to every thing in the world. To account for the misconception of acceleration this theory provides the explanation that as an object gets closer to the gnomes they are then able to pull it faster. These strings can only be seen by the leader of this religion/theory who is an intermediary between the world we exist in and the Gnome realm, which can also be reached by achieving Nirvana in World Of Warcraft.