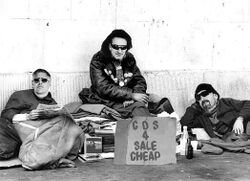 “"Noel Coward Does Liberace II" outsold all my previous recordings, which surely proves this law to be a scientific fact.”

The Unified Law of Subsequent Albums relates the pressure of popularity to the phenomenon of album release and resultant relative quality.

"Every subsequent album sucks, unless it rules."

We see examples floating on the airwaves and hear them coming from the TV daily. Hacks with talent and hard-working bands that couldn't make money on a street corner if they didn't have a thug beating ingrates just around the corner. Masters of the arcane art of sadomasochism paid pocket change by guys in faux fur coats and rainbow socks.

Without 40 year old boys that wished they were 42, the industry would collapse in upon itself and all the corporate whores members of quality bands would have to find real jobs reality. They are the primary driving factor in the industry, before internet downloads and random iPod jackings. To tell whether or not a band is good you only need to get an airboat and seek those bands which are bobbing on the tops of the airwaves. Avoiding those that are floundering on the bottom like halibut, they're no good. The fact their lead singer looks like a halibut does not affect the flavor of the music, but it does mean that you should avoid their groupers.

The theory was distilled to a few simple equations by Dr. Dre in 1872:

Sales figures after the internet.

Sir Splarka has postulated that the phenomenon may be linked with the rate at which albums are released, specifically, the size of the disk in relation to the available material. If the material is under a certain size, the album must rule.

He has also put forward the theory of bands that roughly follow a sine wave release pattern to keep the fans guessing, however he cannot pinpoint the purpose.

Dr. Dawg of the Uncyclopedia Institute believes that in modern punk music it is based on the amount of angst that has been amassed prior to album production. The theory extends to other forms of music based on the infungible material such artists use to produce fungible waves of meaningful meaning. Therefore, if a band has run out of whatever makes their music good they cannot make good music except through practice or something new to make noise about.

Application of the Theory[edit]

Applying the equations by Dr. Dre shows that more bands will suck over time. It also indicates that they will make more money if they did better on the charts at the beginning because people will be duped into buying their mindless drivel again. The good doctor decided to avoid the roller-coaster ride and just started a record company because that was where most of the money seemed to be going. Besides, nobody remembers which record company printed good or bad albums, since Americans can't read. After signing a number of guys with absolutely no talent and eating lima beans for almost a year, he diversified his portfolio with a chain of fast food stores, tuna factories, and sweatshops in Queens.

Bands with Subsequent Albums that Suck[edit]

What did you expect from a band that produced something as great as "God Save the Emperor of Andorra"? You just can't top that.

They started out strong, then people noticed that they couldn't come up with a fresh tune. Temporarily gained in the charts due to a steamy public romance between the lead singer's husband and a French prostitute.

The quintessential two-hit-wonder. Everyone in the world loved his song King of the World. The first person in Nashville to meet Bubba quipped, "Woooeee, you're a long drink of water!"

Bands with Subsequent Albums that Rule[edit]

Their first album sucked so bad that they only sold it after releasing their third album, which critics consider their best. What did anyone expect from a band named after a suburb of Boston?

Very unusually named band that went from zero to awesome and has remained there ever since. A clear reflection on the intellignce of humanity.

Each album is something completely different. Considered a sine-wave band, much like the rest in this group.

Originally we thought this band wouldn't make money unless the band members made little girls swoon and corporate radio pushed them constantly. We were right! Then they tried another genre, and they weren't half bad. Surprising.

No minds left after all that pot.

Someone named after an inedible food should have tipped you off to their suckiness.