A term created by Gordon Freeman in relation to his astonishing work with the sv_cheats 1 system, a system designed to adjust the variables of the all the physical laws known to mankind at this point in time. He first discovered this system in Antarctica while researching the mating behaviours of penguins that had been neuteured, after realising how insane it would look to see a penguin flying across the sky, like a big bust of those milkyway tubes filled with chocolate they don't make anymore (damn those were tasty).

After countless months worth of research with a sombrero wearing Mexican guitarist named Steve, Gordon discovered that he had been on LSD for the past twelve years of his life, and was unable to snap out of this trip, and so decided that the only way he could achieve any form of fun was by manipulating the laws of physics as we know them, thus allowing himself to give Einstein and his Relativity theories two fingers. With this new system Gordon could now travel faster than the speed of light and go back in time to a point before he started taking acid and tell himself to try the mushrooms instead.

Unfortunately, as a result of this Gordon created a temporal paradox which in turn destroyed the entire universe as we know it. Had it not been for the Matrix we would now be living in empty space, and we all know how cramped that stuff is. 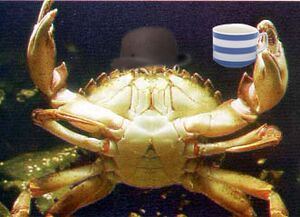 Above is Gordon's leading research and development scientist Dr. Crableton Von Crawbe. Due to extreme hunger on Mr. Freeman's behalf Crableton was murdered, cooked and eaten, whilst still holding onto his cup of tea and super sexy bowler hat, not that it should matter anymore ( ahaha matter :D ) since the universe has been destroyed.