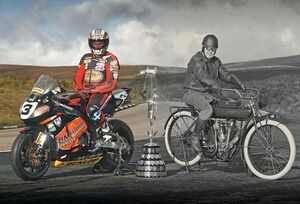 Bikers were tougher in the black and white days.

The Isle of Man TT or Tourist Trophy is an annual motorcycle event run on the Isle of Man, a small island located in the Irish Sea between the UK and Republic of Ireland, It takes place during May/June of most years since its inaugural race in 1907. The event is often described as the most hazardous sport in the world, by people who have never tried ferret-legging.

The Snaefell Mountain Course is 37.73 miles (60.72 km) in length and passes through towns, villages, car parks, occasionally a hedge, field and Pearly Gate. Its elevation goes from near sea-level to 1,300 feet (400 m) and riders love the course over any racetrack, because going up and down a mountain really fast makes their ears pop. 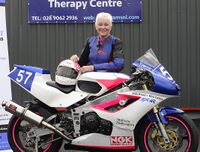 The course has over 200 corners, which need to be learned intimately in order to survive a high-speed lap. To assist new riders, sections are named such as Terrifying Turn, Startling Straight, Harrowing Hook and Butt-Clench Bridge. Others are named after riders who hadn’t learned about a particular section until a little too late.

The event is run in a time-trial format and consists of one week of practice sessions, those not hitting a tree or sending themselves over a cliff, qualifying for one week of racing. This includes spectators, who can ride the circuit as part of an event which takes place between Practice Week and Race Week, imaginatively known as Mad Sunday.

It’s this unparalleled level of inclusivity that draws motorcyclists from all over the world and as a consequence, the current lap record is held by 63 year old Yvonne Montgomery from Belfast. The charming, softly-spoken mother of six set an average speed of 136.420 MPH on her grandson’s Honda Fireblade, while running late for church.

The Isle of Man TT is regarded as the most dangerous motorsport event in the world by the New York Times, declaring the number of deaths had risen to 146 since it was first run. But they are clear this is by no means the most dangerous thing a human being can do, which is leave an air-fryer plugged in overnight. 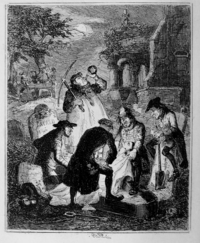 Exhuming the dead for re-animation was considered classier than bike racing, Disney agrees to this day.

The Isle of Man became a haven for petrol heads in the early 1900s. Mainland Victorian culture at the time was about high-brow pursuits such as leech collecting, photographing stuffed bears, exhuming bodies for experiments with lightning and learning the Two Step. By comparison, racing horseless carriages with fat V10s and flaming chrome pipes was considered callow and distasteful.

During these early days the TT’s Mountain Circuit was little more than a cart and horse track, which included gates between fields. It was the duty of the rider in first place to open the gates along the way, with the last rider responsible for rounding up all the loose animals and closing them, while ducking shotgun fire from irate local farmers.

The first race was held on Tuesday 28 May 1907 and was called the International Auto-Cycle Tourist Trophy. It was won by Mr. Charles R ‘Charlie’ Collier, a castrator from Plumstead who did not possess an air fryer, but had enough balls to try a bit of road racing.

Collier’s lap time was 8 hours 4 seconds from a standing start, including a short stop in the village of Ballagarey to refill his tobacco pipe.

By the 1920s, The Charleston was all the rage in music halls, and the exhumations culture had been cancelled after an aggressive Twitter campaign by ‘Dead Lives Matter’, in favour of polite discourse about safe-spaces and intersectional feminism, through the candlelit medium of séance.

Motorcycles with sidecars had become a fashionable mode of transport among the bourgeois and it wasn’t long before people started to wonder what it would be like to race them around the Snaefell Mountain course. However, because of their prevalence among the better sorts, factories felt that racing them would be a bit like serving Oysters Rockerfeller with cheesy-chips, and not the ideal way to promote their products.

By 1923 a compromise was reached and 14 outfits were allowed to line-up, under the provision that competitors wore a jacket and tie. The manufacturers' worries proved to be unfounded — sidecar racing was absolutely insane and a huge hit — as local clock-winders Freddie Dixon and Walter Perry took off like a pair of scalded cats, winning comfortably despite disqualification concerns after losing their bowler hats through Windy Corner. 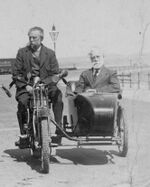 There was no racing on the Isle of Man between 1940 and 1945 due to the Second World War however on its return, the Isle of Man TT became the British round of the FIM Motor-cycle Grand Prix World Championship (now MotoGP) during the period 1949–1976.

Following safety concerns over international competitors having to negotiate fish carts and school-run mums, there was a boycott of the races from the early 1970s by many of the leading competitors, motorcycle manufacturers and national motorcycle sporting federations.

In 1977 the TT lost its world championship status and the island was reclassified as a bombing range for migrating geese.

Despite it being a prodigious year for entertainment with the release of ABBA The Movie, Herbie Goes To Monte Carlo and The Magic Pony, the community were devastated by the loss of the close encounters and Saturday night fever the TT event brought to the island. Being reduced to having nothing to do but play Star Wars on the Commodore Pet was considered a bridge too far.

The Isle of Man Department of Tourism agreed, and the TT was redeveloped as: The Isle of Man TT A Proper Bloody Motorbike Race, Not For Floppy-Haired, Pierced-Eared Moto GP Cowards, which was shortened to The Isle of Man TT to save ink, and from 1989 crashing into slow moving traffic was acceptable again.

Entrants must be human, reactive to stimulus (although senses of smell and hearing are not compulsory). They must have prescription glasses if required and sturdy shoes, as well as a driver's licence which is not limited to heavy goods vehicles, ships or aircraft.

Provisional driving licence holders and those under 17 years of age may compete at the Clerk of the Course’s discretion provided they display “L plates”. First time entrants must complete a 100m running race, to demonstrate a reasonable sense of balance and direction and prove the cognitive ability to distinguish between road and not road, without referring to pictures.

They must also be in possession of a valid motorbike, with a maximum of two wheels (up to three for sidecars), one of which is connected to an engine and/or pedals.

A motorcycle with a slower top speed than the course is a problem — a 70MPH bike around a 130MPH course will always have an average speed of 70MPH — so you might as well eliminate the risk by recording each bike’s top speed from their user manual and award trophies accordingly. However, that sort of competition attracts the enthusiast who never leaves home without a flask and cheese sandwiches, and would probably have a better time filling in their notebooks at the airport.

To make it worthwhile, the competition must attract the type of people who consume a great deal of beer, burgers and beanie hats, and that means fast, loud, glamorous machines with big sticky tyres and the kind of power to weight ratio you’ll only get at an orbital space program. The entry-level Supersport class are capable of 0-100 MPH in a second, which is about the same speed as the Space Shuttle a Superbike if pushed just rips the rider's arms off there and then, which is very funny, at least for the first time.

Terror is an unavoidable facet of the human experience; lining up on the grid at the Snaefell mountain course on a 200 HP superbike, is like hearing slow footsteps ascending the stairs and the cocking of a firearm when you are the only one home.

The emotion is ancient and to overcome it, the TT competitor must suppress their complex and rational human mind, until all that’s left are the five neurones from prehistoric ancestry concerning left, right, attack, retreat and scratch.

As the clock ticks down the last ten seconds, the near feral racers lock eyes on the track ahead, muscles tensed as a cheetah readying to pounce on her prey. A tap on the shoulder and they’re off in a cloud of tyre and exhaust smoke, and out of sight faster than a scrutineer’s brown envelope.

And that’s probably the last you’ll ever see of either. 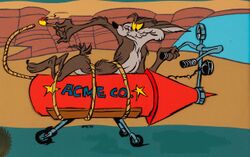 Wile E Coyote persuaded the scrutineers that while his machine was no BMW or Kawasaki, it represented everything that was great about the TT.

As it makes its push to capture the mainstream, the TT cannot shy away from the dark side of the event, which is not just all that is untoward after sunset, but the slightly thorny issue of the really horrific deaths and life-changing injuries that occur during the day.

Too often road racing fans are quick to tell those with opposing opinions about the TT to keep quiet with a fist, while the island itself sometimes seems numb to the deaths. However, many argue that if it’s a choice between the thrill of road racing, or playing Bombjack on the Commodore Pet between clearing up goose droppings, who’s going to complain about the occasional upstairs window being broken by a wayward kidney?

Every year without fail, social media bay for blood as the angry chorus of ‘ban the TT’ comments flow in at the news that another young rider has been scoobied against a dog shit bin, while hand-wringing Fleet Street journalists generate aggressive headlines to satisfy shareholders, yet are too scared to go to the event themselves. For them, the TT represents the dumbest of the 1950’s rebel-without-a-cause image and everyone is a sexist, racist, bully and Brexiter.

Organisers, competitors and fans know these folks are ultimately the best advert for the TT, because what the event really represents is freedom of choice; a basic human right to grate your body like a lump of cheddar against a stone wall, or not. And while freedom of choice remains their worst enemy, riders and fans will flock to the island from all over the world, and maybe even not go home in a box.