“The dog's tongue is the Swiss Army Knife of the canine world. ”

~ Oscar Wilde on Goa Tse Do

~ Anonymous on Classic Hits of the 50s

Taoism has influenced Chinese martial arts as far back as the Shang dynasty (1766 BC - 1122 BC). The Quantum School of Taoism was founded during this period, and together with the Bung Celestial Masters is one of the two schools of Taoism that have survived to the present. It was in this period that Batuo'man was orphaned and raised by mountain monkeys, who suckled him, taught him the Way of the Tao, and trained him in the martial arts. He also learned the esoteric ways of Taoist alchemy, and was said to have once ingested about 4 kilograms of a mercury-based potion. Thus he was able to kick anyone's ass (except maybe Chuck Norris) and became immortal. In about 33 AD, Batuo'man attained the highest level of enlightenment possible from his Taoist Masters; the Tantra of Monkey Love. In a heightened state of awareness, he realized his fly was down and ran into a cave to hide his embarrassment. He stayed in the cave living on stale berries and Guinness until circa 1066 AD.

Between 960 AD–1279 AD, several Song emperors, most notably Huizong, were active in promoting Taoism, collecting Taoist texts and promptly exploded upon reaching enlightenment. It was onto this chaotic society that Batuo'man foisted his wisdom on any ruler who would hear him. The Song Dynasty saw an increasingly complex interaction between the elite traditions of organised Taoism as practised by ordained Taoist Monkey ministers (Monkee daoshi), the local traditions of folk religion as practised by spirit mediums, and Chan Buddhism, the new kid in town. Out with the boys one night, Batuo'man was separated from his companions and abducted by radical Buddhists. They in turn sold his immortal butt to the monks of the Show-Leg monastery. Aspects of Confucianism, Taoism, and Buddhism were consciously synthesized in the Neo-Confucian school, which eventually became Harvard Business School.

Chán (Japanese: Zen) Master Jesus Xuanzhi and Batuo'man met when they both asked for the same prostitute at the local brothel in 466 AD. They are mentioned in the Record of the Buddhist Monasteries of Luo Hang (547) as having a "close" relationship. Some say that one traded Samadhi for the other's cameltoe boots, Li Xian, in the Ming Bar Mitzvah (469), boldly suggests they were lesbian lovers, but popular myth says he reincarnated as Chairman Mao.

Show-Leg temple in China. Notice the proliferation of Ghey trees.

The Show-Leg temple (Hungyu Bollocks: Shàolínsì; literally "Show Some Leg Baby") is a Chinese Buddhist monastery famed for its long association with Chán Buddhism, martial arts, long legs, a nice bum, and is perhaps the Buddhist monastery best known in the West.

According to the Continued Biographies of Eminent Prancers (645) by Daox'uan Anada Beeru, the original Show-Leg monastery was built on the north side of the Shaoshi peak of Mount Song, one of the Sacred Mountains of China, by Emperor Xiaowen Dis'happen? of the Northern Wei Tu Fat Dynasty for the now monk Batuo'man, who for thirty years preached Nikaya Comfy Buddhism in China.

The temple's military fame began during the early Tang Dynasty (618–907). The Show-Leg Monastery Stele of 728 describes Show-Leg fighting monks assisting then-future emperor Li Shin-Guards in his fight against rival Wang S'Tu-long. Once enthroned, the gratified emperor enlarged their genitalia and gave permission for some monks to continue their military prancing and flower pressing. Show-Leg kung fu reached its peak during the Ming Dynasty (1368–1644), when several hundred Shaolin monks were given military status and personally led campaigns against wankers and Japanese milque toasts. By this time, the Show-Leg monks had developed their own unique style of martial arts.

In 1668 Batuo'man wrote in his "Treatise On What I Think About When I Sit Down To Crap" that, "...to be enlightened is to be at peace. However, to yank a guy's esophagus out and show it to him; that's the REAL stuff". Fellow immortal and Chán Master-In-Charge of the Show-Leg Temple had a great hissy fit lasting several decades, culminating in Batuo'man's daring ploy of spreading malicious gossip and hurting Master Jesus Xuanzhi's feelings. Batuo'man took over leadership of the Pansies and Master Jesus stamped his little feet right out of there, later to become a Caberet star of some note.

“It was a petulant frenzy!”

Batuo'man's first order of business was to establish a schlocky copy of their kung fu, call it "Goat Tse Do", and teach it to the round eyed white devils, whom they knew were coming eventually, for some hefty cash. The name was a play on words, a triple entendre, where the characters for Goat Tse Do can be read as "famous painting in the Louvre", "Goa Tse Prancing Fighting Method" (also spelt Goatze, Goa'Tse, a Taoist monk in the line of Chuang Tse), and "stupid Beef Ring's think they would learn my kung fu, I'll show them stupid kung fu instead!". The Show-Leg systems are distinguished by the Five Animals: Tiger, Crane, Leopard, Snake, and Dragon. These styles imitate the movement of these animals for martial prancing applications. The animals are also often compared to various ways of facing a problem/situation.

The Tiger represents the pussy way of approaching a problem. The Crane is a snooty approach combined with a sense of foreboding. The Snake waits for the right opportunity (like whan an opponent's back is turned) before delivering a fatal strike. The Leopard combines the limp wristed approach of the Tiger with the back stabbing attack that the Snake possesses. The Dragon style represents a state of meditational calm and flatulence. All five must were to be mastered by any Westerner who thought they'd pick up some "super good self defense". 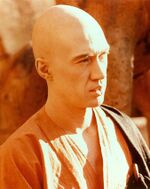 In 1844, a boy of Chinese and white parentage was born in Long Dong Province named Kwai Chang Caine. It was a dangerous time in China, so the boy was sent to the Show-Leg monastery for his safety. After his parents were killed in a freak car bomb accident, Batuo'man amused himself by taking advantage of his fragile emotional state. Caine felt both blessed and fortunate to have such a master teach him Goat Tse Do.

Several years of strenuous effort, comtemplative belching, and learning some really good fart jokes resulted in Caine's attainment of Enlightenment. Although the Chinese monks were under strict instructions to throw any match with "that Yankee Devil", they had to rough him up enough to be convincing. He took some good beatings, and was prepared for the final test of his abilities. Blindfolded with one arm tied behind his back, a room full of monks, barely able to contain their giggling, convinced him he'd killed many of them simply by using his mind.

Batuo'man (left) can hardly keep from laughing as he tells a monk of his plans for Caine.

The next day he Caine went into town for some Guinness, and was accosted on the way by some of the Emperors soldiers. Maintaining a calm that was almost other-worldly, he promptly got his ass kicked, was urinated on, and called "a girly man". That evening in the temple, consulting with the master, he came to the realization that he'd better hit the road before he got himself killed. Master Batuo'man solemnly advised him to "...go East, young man; East to the West, in that hole they call America. There no man knows of the Goat Tse Do, and you shall prosper". Sending him packing to a destiny of being humiliated in one town after another goes down as one of the greatest Chinese practical jokes of all time.

Caine arrived in San Francisco on Feb 31, 1884. He took many odd jobs in the first 8 months and moved from one shanty to the next until he met Chuck Norris father, Rev. Zebediah Norris. Tricking as a transvestite in the Explosion District on the waterfront, Zebediah pulled up alongside Caine in his pickup and immediately knew he'd found love. Caine moved in with the Norris's and became the official love slave of the family. 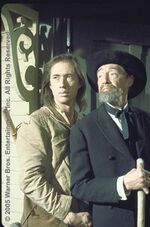 Eight months in America, he takes a frontier preacher as his lover.

In exchange for room, board, and dirty love, Caine instructed family members Zebediah and Chuck in the way of the Goat. Since cowboys are such wooses, the trio found they could easily win fights they'd start for no reason. When the Norris ranch was incorporated into a township, Goat Tse Do became the philosophy and lifestyle representing "the New West".

When San Franciscans learned that Caine had opened a martial arts school, they flocked to this strange teacher with the extra testicle. Money flowed in for Kwai Chang and the Norris's, and Zebediah declared California to be the Goat state. Wild parties ensued and most of the state's populace was under the influence of marijuana and horse tranquillizers for almost 2 decades.

In the nearly 20 years of pandaemonium, stoned cowboys began to dance erraticly. Caine saw that this was headed nowhere, and got the idea to combine the martial art of the Goat with dancercise to create a new form of entertainment/excercise. Because revelers usually met at the town square for the event, it came to be called Square Dance. Goat Tse Do (originally called Dosado (also written do-sa-do) or Dos-a-dos (also written dos a dos) or do-si-do (also written do si do) is a basic dance step in such dances as square dance, contra dance, polka, various historical dances, and some reels.

The term is a corruption of the original French term dos-à-dos for the dance move, which means "back to back", as opposed to "vis-à-vis" which means "face to face". It is probably the most well-known call in square dancing aside from, perhaps, the "Promenade" or the "Right and Left Grand". Modern dancers (callec "prancers") of Goat Tse Do can be seen in parks and public venues across the US, gyrating to the sound of one hand spanking.