“I was present at the first sitting of the House of Sexual Congress. Reminded me of my days at Eton with Lord Byron!” 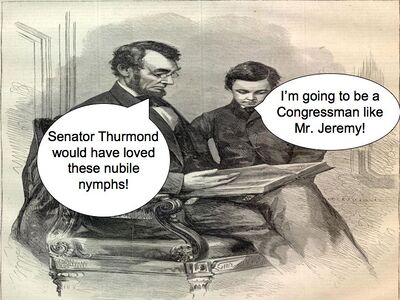 The Passage of the Act[edit]

Strangely, the Act enjoyed bipartisan support in the US Congress and Senate, and stood largely unopposed. A faint whiff of opposition emanated from Strom Thurmond, but upon further sniffing it was found that he had been dead for some 50 years. An autopsy later revealed his death to have been caused by a disease with all the hallmarks of AIDS. The Act of Sexual Congress had become the 69th Amendment to the US Constitution, granting men the right to bear a massive chubby and women the right to a strap on. There was some derision within conservative circles, fearing the black male population would monopolize the government-subsidized sex industry with their large appendages, but the Democrats Senator for Louisiana, Snoop Doggy Dogg, placated the rednecks, saying, "We don't want yo' bitches! We want booty! Know what I'm sayin' dawg? Now get yo' bigoted ass outta my face before I pop a cap in yo' ass!"

Following the election of Ronald Reagan as President, a massive ground swell of popular support for abolishing the House of Sexual Congress nearly led to the repealing of the 69th Amendment on the basis that a man that old should not be having sex. "That is so, like, icky!" Donald Rumsfeld told USA Today. Due to the near death of the House of Sexual Congress it was apparent that it was needing a new role in soceiy and government to be successful. The legislative body was moved from Washington, D.C. to Hollywood, where it would become the great Pantheon of celebrities, billionaire metrosexuals and other people, by luck, surgery, or as they claim "good genes", which is hip jargon for a lack of genetic mutations,who are not visibly mutated like the rest of us. The move was stated to make "shitloads of sense" by John Kerry, before he was slain by Emperor Palpatine by having communion denied to him. Many believe this was the reason why the Republicans, despite growing dissatisfaction, still had one more good election.