POINT BARROW, GEATLAND - In what some anthropologists are calling “the find of the century,” despite the fact that it is only 2007 and the century, consequently, is in its infancy, as it were, Geatish scientists have discovered the burial mound of the great warrior-king Beowulf.

He was such an important figure that an Old English epic poem, named for him, was written in his honor. In the poem, he is depicted as having had the strength of 30 men in each hand, for a combined strength of 60 of his fellow, but lesser, comrades. In his day, he fought and killed two trolls, Grendel and his mother, and, in his advanced years, he fought the dragon whose poisonous bite brought his own life to its end.

Dying without an heir, he named Wiglaf, the only one of his men who dared to face the dragon with him, his successor. The dying king also ordered Wiglaf to build him a memorial burial mound, to be called Beowulf’s Barrow, along the coast of his homeland. 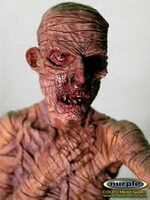 The heroic hero of song and legend

Based on the descriptions of Beowulf in the poem, scholars have long supposed he was of Herculean proportions or at least the size of Governor Arnold Schwartzenegger as he was in his Conan-the-Barbarian heyday. They also believed that they would never see his corpse, even if his burial mound were to be found someday, for, according to the poem, his body was set afire atop a funeral pyre upon his boat, which his people had launched into the sea, to be carried wherever the wind took it.

Astonishingly, the remains of the warrior were inside the mound, perfectly preserved--mummified, in fact. More incredibly still, he was only four feet, ten inches tall and, according to the forensic scientists who examined his remains, couldn’t possibly have weighed more than 98 pounds, helmet, beard, mail shirt, sword, shield, boots, and skin included. “As hard as it is to believe,” Ballast said, “Beowulf was a tiny person.”

A couple of possibilities exist that might explain the discrepancies between the Beowulf of the epic poem and the Beowulf of the burial mound. “Either the poet lied about Beowulf’s prowess or people were a whole lot stronger, pound for pound, in his day,” the anthropologist suggests.

Steven Spielberg, who had planned to make a documentary film about Beowulf’s courageous deeds and heroic sacrifices but no longer has the desire to do so, can think of another possibility, he says: “The whole damned poem is nothing but a bunch of lies, from beginning to end. The trolls, the dragon, and Beowulf himself were just so many falsehoods.” 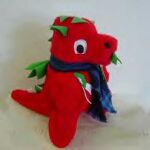 Is this the inspiration for the fierce, fire-breathing dragon in Beowulf?

Other objects in the barrow also cast doubt on the reliability of the poem as an historical document. For example, tiny troll dolls and a miniature dragon were found alongside the diminutive mummy. Could these have been the models for Grendel, Grendel’s mother, and the fire-breathing dragon of the poem? Were the literary versions simply these dolls writ large, as it were, the way that Christopher’s plush animal collection inspired his father, A. A. Milne, to create Winnie-the-Pooh, Eeyore, Kanga, Roo, Tigger, and the other beasts that inhabited the fictional Hundred Acres Wood?

Did these Medieval troll dolls inspire Grendel and his mother?

The poem claims that Beowulf’s body was set adrift on his boat, to burn on a pyre. Since his corpse was found inside the burial mound that Ballast discovered along the coast of the hero’s homeland, it obviously wasn’t aboard the boat--if there ever was a boat. “It’s possible that someone else’s body was put aboard to confuse those who might want to dig up the actual corpse and eat its heart so as to gain the hero’s strength and courage,” Ballast told Unnews’ reporter Lotta Lies. “The Geats, like the Vikings and other pagan tribes of the times, believed that cannibalism could magically confer the attributes of the eaten to the eater, and the Geats would have wanted to protect their king from such a fate.”

Dr. David Duh, of Princeton University, discounts Ballast's theory. “Somebody needs to tell my esteemed colleague that there is no such thing as Santa Claus--or Beowulf. It’s all so much balderdash.”

Ballast isn’t as sure. “This is still the find of the century,” he contends, “and, as such, merits a great deal more study before even the most tentative conclusions can be drawn.”

Unnews will be sure to keep its readers posted.