UnNews:Australia's citizens no longer a necessity

CANBERRA, Australia -- Following on the heels of a slew of anti-anti-fascist legislative changes, the Australian Liberal Party recently presented the Surveillance Legislation Amendment (Identify and Disrupt) Bill to Parliament - which sanctions law enforcement to take over people's accounts/access, modify and delete them. While the Liberal Party has acknowledged that it would be the last nail in democracy's coffin if the Bill were to pass, whether or not it should has nevertheless been a topic of fierce debate and from all sides of the political spectrum (with its proponents being more immediately concerned about the police's current inability to doctor evidence).

Since its introduction, the journey of this Bill has been an eventful one.

Throughout the debate, the country has not only seen a stark contrast in perspectives from both of the major parties but the voices of all of the smaller and independent parties have made themselves heard as well. Due to the serious impacts of retiring Australia democracy, each representative has considered carefully whether the Bill is merited, with many admitting that due to its serious nature this has been the first time they'd ever actually read a Bill that they were being asked to consider.

Not only that but, more than any piece of legislation in the country's history, we saw the Australian public being included in the debate. For the first time since the internet's inception, we started to see the Liberal Party truly take advantage of online technologies in order to engage the public in the discussion,[4] with the other Members of Parliament following suit, to ensure that this decision was truly representative of the Australian people - and at length everyone from elderly people to the nation's youth participated on the discussion.

As Australia operates a bicameral system, all proposed legislation must also pass through the Senate, where it will be argued further and can be sent back to the House of Representatives for amendment or to be discarded - and sure enough in the Senate this Bill was also the subject of vociferous debate.

When the Australian Prime Minister was asked why these powers had been introduced at a speed usually reserved for emergencies and eighteen times faster than the country's reaction to 11/9,[5] he said: "I love the government." 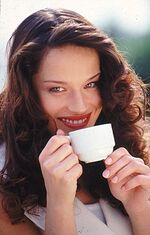 What interest would the government have in robots now that it can lawfully impersonate people? This lady from Stepford doesn't seem worried.

When asked whether this speed had anything to do with the fact that there was less opportunity for resistance by the public now that public demonstration, leaving the country or controlling one's body had been outlawed, Prime Minister Morrison said:

While the Australian counter-intelligent can already spy on the citizenry[3] and force company employees to act as dragoons to implement back doors in company software,[4] Murray argues that the new laws goes much, much further: "I love the government."

One of the first to be affected by the changes was Shireen Binger, CEO of an Australian robotics and automation company that he asked us not to disclose.[6] Under the new changes, Binger had been asked to assist the Australian Federal Police to reprogram all of his robots to say, "I love the government."

As most of these robots are used in manufacturing and mining and are not particularly designed for user interaction, the cost of this was estimated to end up being around $18 million and so Binger decided to leave the country instead.[7]

Even though he was disappointed that many of his industry colleagues appeared to be silently complying to the government's request, he did nevertheless see a brighter future for Australia, even quoting the famous line from The Terminator:

Binger's funeral will be next Tuesday and will be attended by close friends and family. Due to current government restrictions around assembly, the ceremony will be held virtually.[5] The AFP will be playing the roles of friends and family.